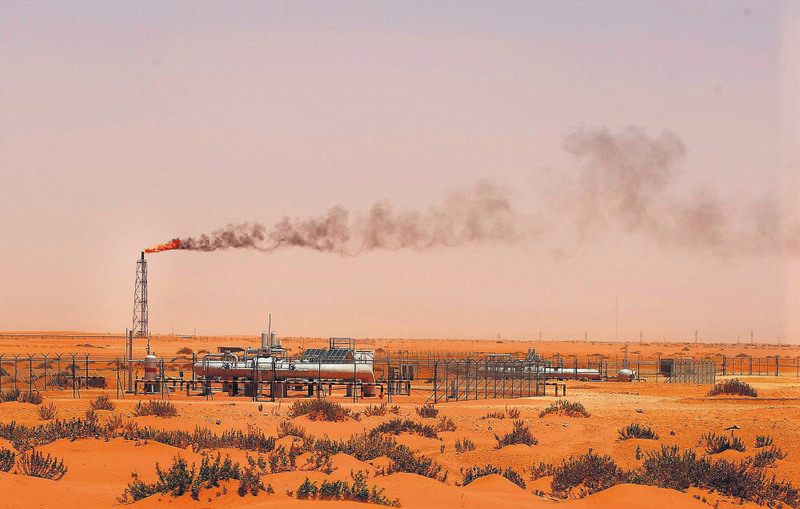 by reuters Jan 12, 2016 12:00 am
Saudi Arabia is considering selling shares in refining ventures with foreign oil firms but would not offer a stake in the crude oil exploration and production operations of state oil giant Saudi Aramco, sources familiar with official thinking said.

Some Aramco managers have been informed that the company is looking at listing shares in "joint downstream subsidiaries" at home and abroad, the sources said. One option is to create a holding company that would group together Aramco's stakes in the downstream subsidiaries, one source said. Shares in the parent firm would not be offered, he added. "The holding company is the one which could be listed, not Aramco itself," he said, declining to be named because of political sensitivities.

The global energy market has been awash with speculation since Deputy Crown Prince Mohammed bin Salman appeared to indicate in an interview with The Economist magazine last week that Saudi Arabia might sell shares in Aramco, as part of a privatisation drive to raise money in an era of cheap oil.

On Friday Aramco, the world's largest oil company, issued a brief statement saying it was considering options including the stock market listing "of an appropriate percentage of the company's shares and/or the listing of a bundle (of) its downstream subsidiaries".

Aramco has crude reserves estimated at about 265 billion barrels, over 15 percent of all global oil deposits, so it could become the first listed company valued at $1 trillion or more if it went public, analysts have estimated.

But several sources close to Aramco said its massive size, and the confidentiality surrounding it as the main instrument of the kingdom's oil policy, meant the sale of a stake in the parent firm was not being actively considered. "The government will never give up its crown jewel," said a senior banker in Riyadh. Instead, authorities are looking at accelerating plans that have been in the works for many years to sell shares in part of Aramco's vast refining and petrochemicals empire, which by itself is estimated to be worth tens of billions of dollars. A precedent for the sale already exists: PetroRabigh 2380, a refining and petrochemicals venture in which Aramco and Japan's Sumitomo Chemical each own 37.5 percent. It held an initial public offer on the Riyadh bourse in 2008.

"The higher priority is to IPO downstream - it would be low-hanging fruit," said Essam Al Zamel, a prominent economic columnist in Saudi Arabia. It is not clear which ventures might be involved in a sale. But the range of candidates is wide; Aramco and subsidiaries own or have an equity interest in over 5 million barrels per day of refining capacity.

Its operations include a joint refinery with Royal Dutch Shell in Jubail known as SASREF; a venture with Exxon Mobil in Yanbu known as SAMREF; and its YASREF refinery, which is a venture with China Petrochemical Corp. YASREF has already said it is looking at listing its shares eventually on the Saudi stock market. Subsidiaries of Aramco abroad include S-Oil in Korea; a refinery in Fujian, China owned jointly with Exxon and Sinopec; and Motiva in the United States, which is a venture with Shell.

Prince Mohammed told The Economist that he expected a decision on the Aramco privatisation to be made "over the next few months". But an actual sale of shares would probably take much longer to happen as it would involve reorganising Aramco.

"This is still at a very preliminary stage. They have to do a study first and submit the results to the board members, and then decide whether to go ahead with it or not," said the first source.

Selling shares in joint ventures could prove problematic if foreign partners did not agree. An industry source said Aramco's foreign partners had not yet been consulted on the idea; at present, they are "like a deaf man at a wedding", he said.

At the right price, foreign investors might be keen on grabbing a chunk of Saudi Arabia's refining operations, which have been growing even as global oil prices have plunged in the last 18 months, squeezing upstream producers. But Saudi political sensitivities may influence any sale. Traditionally, shares in state firms have been sold at discounted prices exclusively to Saudi investors as a way of sharing the kingdom's oil wealth.

So any listing of shares would probably have to occur on the Saudi bourse, and though the market opened to direct foreign investment last year, participation in an initial public offer might well be limited to local investors; foreigners would have to buy the shares in the secondary market.

The Saudi bourse, capitalised at only $379 billion, has been hit hard by the tumble of oil prices - it is trading at four-year lows - so it is in poor shape to absorb a big new supply of equity. Initially, any sale of Aramco assets might therefore be limited to several billion dollars, bankers say.

Nevertheless, the government appears determined to proceed with a sale - not merely to raise money, but as part of a drive to diversify the economy beyond crude oil production and have the private sector play a bigger role, analysts said.