Oil wealth a blessing, energy dependence a curse for Russia 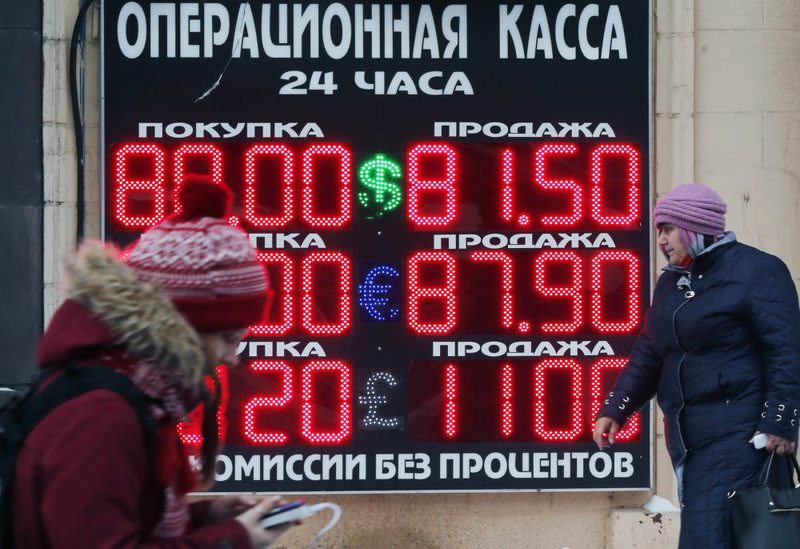 People walk past a board listing foreign currency rates against the Russian ruble in central Moscow.
by French Press Agency - AFP
Jan 25, 2016 12:00 am

Abundant oil and gas deposits have been a blessing for Russia, but they now feel like a curse as low prices propel the country into a deep economic crisis that shows no signs of abating

The ruble fell to a record low against the dollar this past week as global crude prices slumped to 12-year lows, highlighting Russia's vulnerability to changing oil prices and the fact that Russian President Vladimir Putin's government has squandered opportunities to diversify the economy. Although the ruble bounced back on Friday after a slight recovery of the oil market, the head of Russia's central bank, Elvira Nabiullina, publicly called for "structural efforts to diversify the economy." "We should not expect to see oil prices return to high levels," she said.

Calls to develop long-neglected sectors of the economy come as the government faces increasing pressure to react to a crippling economic crisis that has seen inflation soar and Russians' purchasing power shrink dramatically. Booming oil prices in the 2000s when Putin came to power helped fill state coffers and ushered in an era of prosperity.

Oil wealth, which led to higher living standards after the country's tumultuous transition to capitalism in the 1990s, also boosted Putin's popularity. For the past decade, however, the International Monetary Fund (IMF) has urged Russia use its oil revenues to support revamping the economic sectors that have been overlooked since the collapse of the Soviet Union. "Oil is both a blessing and a curse," IMF mission chief to Russia, Antonio Spilimbergo, warned in 2012, urging Russia to improve its business climate and fight corruption to attract foreign investment. The Kremlin has also acknowledged the need for change. In his 2006 address to the nation, Putin called on his government to restructure the economy to focus on new technologies. In a much-touted modernization drive, the country founded Rusnano, a public holding company specialized in nanotechnology, and Skolkovo, an innovation center that has branded itself as Russia's answer to Silicon Valley. But these initiatives have not come anywhere close to challenging the deep-rooted public energy giants.

"It's easy to talk a good game on the need to diversify away from energy sectors, but the reality of pushing through the necessary reforms is more difficult," said Neil Shearing, chief emerging markets economist at Capital Economics. "This is particularly true when oil and gas prices are high." High oil prices in fact enabled the authorities to adopt a wait-and-see policy and prop up the ruble, which in turn made Russian companies less competitive on the international stage. "Ironically, it could be the collapse in global energy prices and the ruble that gives the biggest spur to diversification," Shearing added.

The financial crisis of 2008 and 2009, accompanied by an oil price slump, had sounded alarm bells among Russian authorities. Then-President Dmitry Medvedev said there would be "fatal" consequences to waiting for the oil market to rebound before revamping the economy. The crisis also prompted a skeptical Putin to finalize Russia's accession to the World Trade Organization (WTO) in 2012, despite fears that opening Russia's market to global competition could result in higher unemployment. But oil prices once again shot up, and Russia's oil production has not slowed down since.

Russia pumped a record 534 million tons of crude oil in 2015, even as it reeled from a fall in oil prices. The state has reinforced its presence in the sector, turning state oil company giant Rosneft into a global goliath and developing ambitious plans for the Arctic. But this time, authorities expect no quick rebound in oil prices, Russian Finance Minister Anton Siluanov said. Siluanov said the government was preparing an anti-crisis plan to adapt budgetary policy to "new realities."

For economist Lilit Gevorgyan of IHS Global Insight, weaning the Russian economy off its oil dependency would "require serious long-term political efforts" to solve lingering issues such as corruption, red tape and the judicial system's lack of independence. With Western sanctions imposed against Russia over the Ukraine crisis, Moscow's prospects of improving the country's business environment remain grim. "Today's Russia is far from launching any reforms," Gevorgyan said. "The country is governed by a very powerful executive branch that views all decentralization of economic power as a threat to its existence."