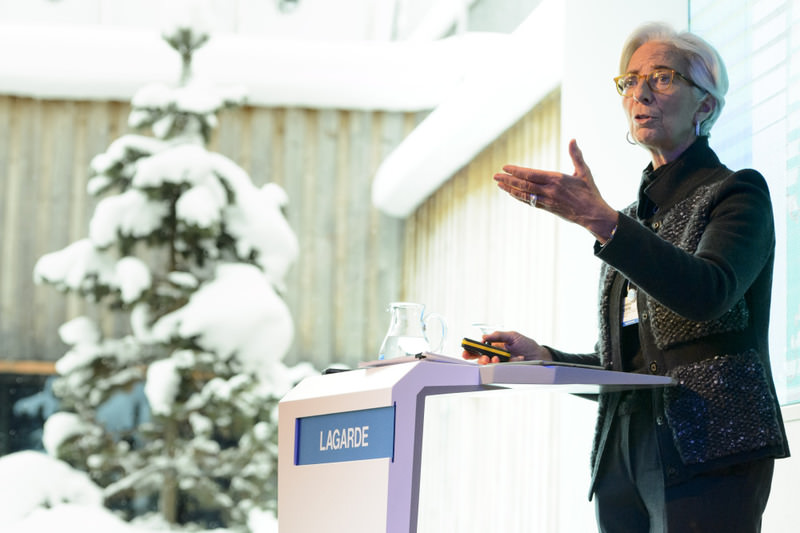 by Daily Sabah with Reuters Feb 04, 2016 12:00 am
Christine Lagarde, the managing director of the International Monetary Fund (IMF), has expressed her concerns regarding the effect the sharp decline in oil prices is having on many producer countries, saying that, "Troubled oil countries keep me up at night." In an interview at Albright Institute at Wellesley College, while talking about the decline in oil prices, Lagarde put particular emphasis on the fact that 90 percent of Nigeria's exports and 60 percent of their Gross Domestic Product (GDP) are from oil revenues. Analysts point out that Venezuela and Azerbaijan are similar.

Furthermore, the IMF said on Tuesday that it stands ready to help the oil exporters of sub-Saharan Africa cope with plunging crude prices and growing fiscal pressures, but that it has yet to receive any new funding requests from the region.

Nigeria and Angola instead have turned to the World Bank for assistance, even though the IMF is typically viewed as the world's go-to crisis lender. Facing an estimated $15 billion budget deficit in 2016, Nigeria's finance ministry has said it is looking to borrow as much as $5 billion. It has held discussions with the World Bank, African Development Bank and China's Export-Import Bank due to their "concessionary rates of interest."

The World Bank is discussing potential financing for Nigeria and Angola through a program to support structural changes in an emerging market country's economy and government institutions.

The two sub-saharan African countries are the latest in what may become a long line of oil-exporting countries to seek financial assistance to help stem growing deficits as falling crude prices crush revenues. The IMF and World Bank are already talking to Azerbaijan about a $4 billion financing package.

On Tuesday, U.S. crude fell back below $30 a barrel, half its price in June 2015 and down from about $100 two years ago. "The sharp decline in oil prices represents a formidable shock on the oil exporting countries of sub-Saharan Africa, especially in view of their strong reliance on oil receipts for fiscal and external revenues," an IMF spokeswoman said in a statement.

The IMF noted that despite rising deficits, several of these countries still have adequate foreign exchange reserves and low levels of overall debt. This would suggest that a balance-of-payments crisis is not imminent. When Lagarde visited Nigeria in January to meet new President Muhammadu Buhari, she insisted that she was not there to negotiate a loan program.

"With the exception of Chad, which already had a program in place with the IMF prior to the oil price shock, we have not received any new request for financial assistance from sub-Saharan African oil exporters," the IMF spokeswoman added. "We indeed stand ready to assist the authorities, should such a request materialize." Although wealthier Gulf oil producers are expected to fare better due to deeper reserves, the IMF issued a warning last week to Bahrain that it, too should cut deficits now reaching 15 percent of economic output, which have weakened investor sentiment.
RELATED TOPICS