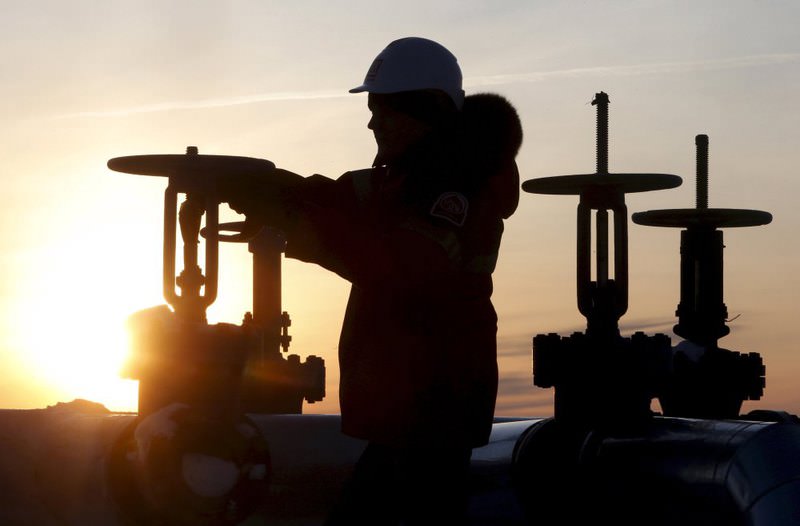 A worker checks the valve of an oil pipe at the Lukoil company owned Imilorskoye oil field outside the West Siberian city of Kogalym, Russia.
by Daily Sabah with Wires Feb 16, 2016 12:00 am

While the Russian economy is facing trouble with tumbling oil prices and Western sanctions, in order to rescue its deteriorating economy from recession, Russia wants to ameliorate relations with other exporter countries

Russia wants to see improved relations between Iran and Saudi Arabia at a time when joint action is needed to influence global oil prices, the RIA news agency on Monday quoted Zamir Kabulov, a senior official at Russia's Foreign Ministry, as saying. Russia, one of the world's top oil producers, has repeatedly refused to cooperate with the Organization of the Petroleum Exporting Countries in recent years despite the falling price of oil, the lifeblood of its economy.

Any hope of sealing a global output deal has so far foundered on Iran's position. Tehran is boosting production to try to regain market share after sanctions were lifted, paving the way for it to re-enter the market after a long absence.

The prospect of cooperation between Iran and leading producer Saudi Arabia is further complicated by the fact that the two countries are geopolitical foes who support different sides in conflicts in both Syria and Yemen.

"We all need stability on the oil market and a return to normal (crude) prices," RIA quoted Kabulov as saying.

"And these are the key nations, especially Saudi Arabia and Iran, which is striving to return to the oil market, anticipating the removal of sanctions."

Some OPEC countries are trying to achieve a consensus among the group, while some non-members back an oil production freeze, sources familiar with the discussions said last week, a possible attempt to tackle the global glut without cutting supply. Top exporter Saudi Arabia might be warming to the idea, though it was too early to say whether it would give its blessing because any deal would mainly depend on a commitment by Iran to curb its plan to boost exports, the sources said.

Even as officials on both sides discussed the possibility, Russia and OPEC continued to pump oil at some of the highest levels in recent times last month, suggesting both were locked in a fierce struggle for market share.Benchmark Brent crude has fallen around 70 percent since mid-2014.

According to estimations made by Russia's Ministry of Finance, unless necessary reforms are made and the oil prices go up before 2030, the economic recession is likely to continue for at least 15 more years.

Conservative estimations suggest that until 2030, and based on a barrel of oil being priced at $40, the Russian economy will grow by approximately one to 1.3 percent annually. A 0.8 percent shrinkage is expected this year, with a return to growth expected in 2017, and by 2020 the country will be able to reach 2014 GNP levels.

Real prices have decreased by 23 percent since last year and may reach 2014 levels only in 2025. According to previous estimates prepared by the Ministry in 2013 and covering a period till 2030, oil prices was calculated at $80 a barrel, and the annual economic growth rate was predicted at approximately 2.5 percent.
RELATED TOPICS