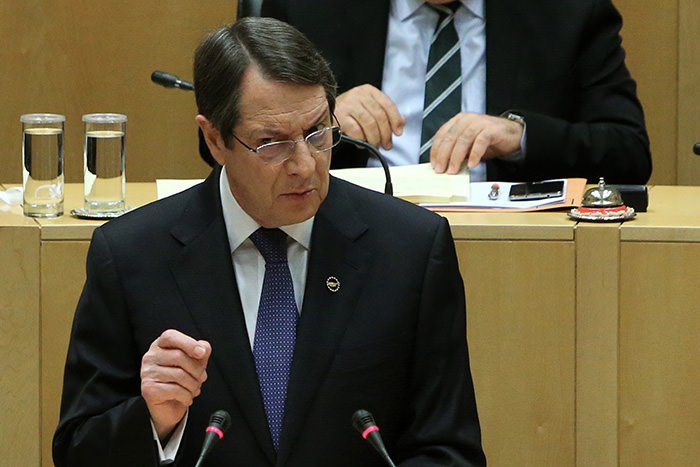 by Daily Sabah with AA Feb 25, 2016 12:00 am
Future energy cooperation could help bring about unity in Cyprus and stability to the wider eastern Mediterranean, Greek Cypriot leader Nicos Anastasiades has told Anadolu Agency.

In an interview conducted via email, he said the major natural gas fields discovered in 2009 would promote collaboration between regional actors.

"Energy cooperation in the region can transform the eastern Mediterranean into a pillar of stability, security and peace and be a decisive factor in achieving energy security for the EU," Anastasiades said.

He added the discovery would create a "grid of alliances" between gas- and oil-producing nations and consumer states to the "benefit of their socio-economic development and the welfare of their people."

The Aphrodite natural gas field off Cyprus is estimated to hold 128 billion cubic meters of gas while other fields in the region hold even greater reserves.

Running parallel to the island's new-found mineral wealth are talks to reunite the Turkish and Greek communities under a federal system.

The Greek Cypriot leader said he hoped to transform the country "from an island divided to an island that is a common homeland for co-existence, peaceful cooperation and tolerance."

He added: "I strongly believe that reaching a solution on the Cyprus problem can become a paradigm of how diplomacy and the adoption of a reconciliatory stance can contribute to the resolution of even the most difficult international issues, prevailing over mistrust."

This, in turn, would further bolster stability and peace in the region.

"As I have often stated, I am convinced that energy must not be a source of friction but rather a catalyst for peace, stability and regional integration," he said.

However, Anastasiades warned that considerable work remained to be done before a "clear plan, with no deficiencies, gaps and ambiguities that will jeopardize its implementation" can be presented.
Last Update: Feb 25, 2016 2:49 pm
RELATED TOPICS