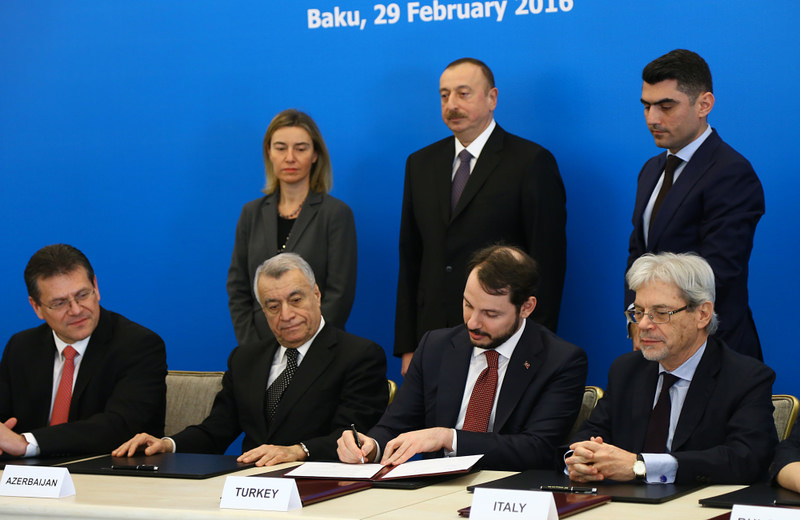 by Daily Sabah with AA Mar 01, 2016 12:00 am
Energy and Natural Resources Minister Berat Albayrak delivered a speech at the second presidential meeting of the council of consultants of the SGC in Baku, Azerbaijan. He said that the SGC project was first coined by the European Commission in order to contribute to energy supply security and resource diversity, adding that the project aims to carry Caspian resources to Turkey and Europe. He also said the SGC represents the chain of the most complex natural gas projects, beginning from the production of natural gas to its transportation to consumers with a whole package of investments worth $45 billion.

While drawing attention to the exemplary cooperation between Azerbaijan and Turkey, Albayrak stressed TANAP's importance as one of the most fruitful products of cooperation between the two countries. He said that the TANAP is a crucial part of the SGC.

Albayrak said that efforts to realize the TANAP project will carry 6 billion cubic meters of natural gas to Turkey and 10 billion cubic meters to Europe. He said that consortiums working on Azerbaijan's Shah-Deniz natural gas field and the TAP, which will carry Caspian natural gas to Western Europe, should move their project schedules up in order to put the SGC into full effect soon. "Turkey will resolutely continue to provide great political, technical and economic support for the realization of the TANAP and SGC projects," he said.

Albayrak said Turkey believes that all parties taking part in the project will get the best of it in a win-win situation, adding that Turkey aims to boost its energy supply security and those of the surrounding region with its multifaceted energy policies.

Stressing that Turkey has more diversified resources and routes than other countries in the region, he said that Turkey's commitment to turn its potential of bringing together producer and consumer countries in concrete projects continuously rises.
RELATED TOPICS