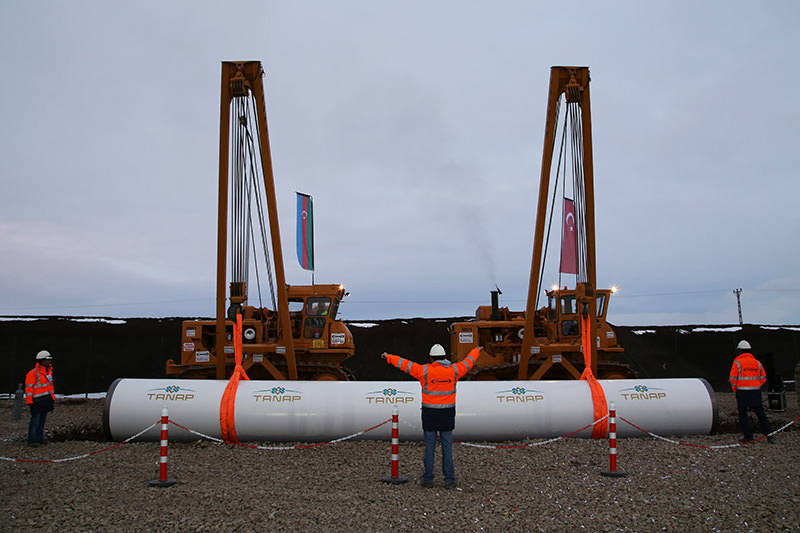 President Erdoğan and his Azerbaijani counterpart Aliyev met at the fifth Azerbaijan-Turkey High Strategic Cooperation Council, where Erdoğan announced that the works for the construction of the TANAP are progressing as planned

The fifth Azerbaijan-Turkey High Strategic Cooperation Council was held in Ankara yesterday with Azerbaijan President Ilham Aliyev and President Recep Tayyip Erdoğan in attendance. At the press conference the leaders of both countries said that they are considering mutual trade issues including energy, transportation, defense and military cooperation.

Claiming that the most important project developed between the two countries is TANAP, Erdoğan said that the work on TANAP is progressing as planned and that both countries are striving for to have all work completed by the intended time. President Erdoğan also said that Turkey is in coordination with all stakeholders regarding the southern gas corridor.

The foundation of TANAP – worth $10 billion – which will decrease Europe's dependence on Russia and meeting Turkey's ever increasing gas demand and carry the gas from the Azerbaijani Shah Deniz field to Europe, had been laid on March 17, 2015 with the participation of the presidents of Turkey, Azerbaijan and Georgia.

Erdoğan said that trade relations between the two countries have accelerated due to the decreasing oil prices and other global relations and that at the meeting on Tuesday they decided to take "solid steps" but he didn't give any more details.

Erdoğan also thanked Aliyev for his solidarity as Aliyev moved the meeting, which was supposed to be held in Baku, to Ankara, due to the terrorist attack that took place on Sunday in Ankara.

Meanwhile, TANAP is expected to be completed by 2018, and it is estimated that $761 million worth of machines and equipment will be imported for the project and the project will provide employment opportunities for around 187 employees. With the implementation of the project, the natural gas produced at the Şah Deniz 2 Natural Gas Production Site located in the Caspian Sea in Azerbaijan, in addition to other sites located south of the Caspian Sea, will first be transported to Turkey and then to Europe. TANAP will be a part of South Natural Gas Corridor, as it will connect with the South Caucasian Pipeline (SCP) and the Trans-Adriatic Pipeline (TAP). The TANAP line will enter Turkey in the Türkgözü village of northeastern Ardahan province on the Turkish-Georgian border and will cross through 20 cities. The line will end in the İpsala district of Edirne located on Turkey's border with Greece. It will then connect with the TAP to transfer natural gas to Europe. There will be two outlets within Turkey, one in Eskişehir and the other in the Thrace region for connecting to the national natural gas transmission network. In total, the TANAP will be 1,850 kilometers with surface installations, with 19 kilometers crossing under the Marmara Sea.

Afterwards, the governments of the two counties signed five critical agreements, the first one being the "Protocol on Exchange of Military, Civil Employees for Social and Cultural Purposes." At the signature ceremony, ministries from both countries signed the "Agreement on Family Members of Diplomatic Mission and Consulate Employees to be Employed in High-Earning Jobs," "Changing and Mutual Acceptance of Drivers' Licenses between the Republic of Turkey and Azerbaijan" and "Protocol on Technical Cooperation between the Republic of Turkey and Azerbaijan."

After the meeting, President Erdoğan held a lunch in honor of his Azerbaijani counterpart at the presidential complex.