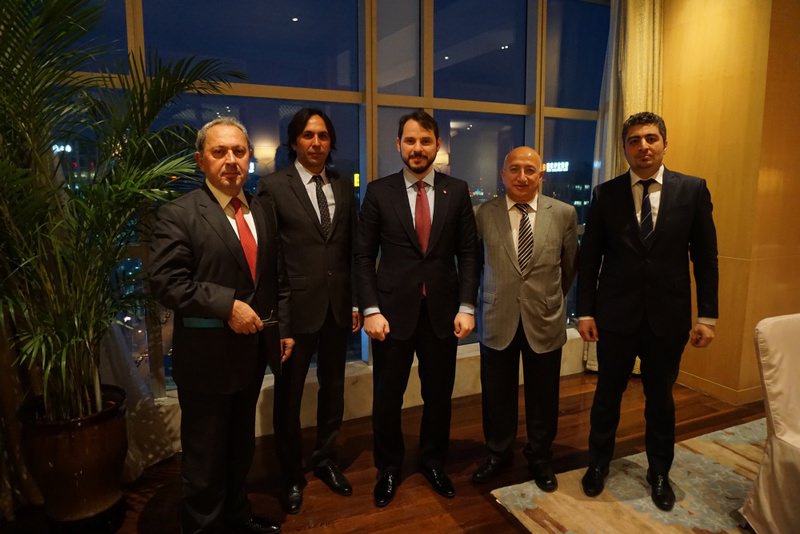 Energy Ministry is looking for alternative sources to cover the country's energy demands. Minister Albayrak paid a four-day visit to China to meet with investors in the fields of renewable and nuclear energy

Energy and Natural Resources Minister Berat Albayrak traveled to China on Tuesday to discuss collaboration in the energy sector. Albayrak will meet the giants of the wind power and coal mining sectors in Beijing along with representatives of solar power in Shanghai. During his four-day visit to China, Albayrak will attend high-level meetings, share Turkey's future goals and projects with the Chinese and discuss opportunities for collaboration and investment. Albayrak will also meet internationally renowned Chinese firms investing in fields including finance, renewable energy, mining and thermal power plants. Albayrak's visit to China includes stops in Beijing, Weihai and Shanghai.

At his first stop, Albayrak will visit the Wind Power Center in Beijing, and meet the world's most important wind power firms, later followed by meetings with the representatives of the China Development Bank and several finance institutions. Along with discussing economic stability in Turkey with Chinese firms, Albayrak will also call for investment in Turkish projects. Later he will meet China's National Energy Administration Director Nur Bekri, and discuss collaboration between Turkey and China regarding the energy sector. As the last stop of his Beijing program, Albayrak will meet the giants of the Chinese coal mining sector.

The last stop of Albayrak's four-day visit will be Shanghai where he will visit Shanghai Nuclear Engineering Research and Design Institute, and meet the world's leading firms operating in the fields of thermal power plants and renewable energy. He will discuss Turkey's potential for coal mining and renewable energy sectors, and possible shared projects. Albayrak will also meet with prominent Chinese firms in the solar power sector in Shanghai.

Energy and Natural Resources Minister Berat Albayrak started a four-day trip in China and shared some information regarding the work carried out on coal at a press conference. He said that he does not approve of the lease charges system since the state only charges a fee in this system, adding that the Energy and Natural Resources Ministry has been working on a new model to bring about more efficiency.

The lease charges system involves the state leasing mines and in return it purchases the products at a predetermined price. The system was initially started by the Turkish Hardcoal Authority in some mines and was formalized with the Mining Law put into effect in 2004. The primary aim of the system is to find reserves at the lowest cost possible and operate it. As such, the lease charges system is often criticized for its tendency to endanger the lives of workers and the enterprises running the reserve.

Albayrak said that a new system, on which the ministry has been working, will be put into effect soon. Regarding the existing systems implemented in the field of coal, Albayrak said: "The models in effect have become more complicated and cumbersome with time. But the models do not have to be this complicated. Our aim is to create an environment in which cheap energy is produced at the fastest pace possible."

Albayrak's entourage on his visit to China includes Prime Ministry Privatization Administration (ÖİB) President Mehmet Bostan and Prime Ministry Investment Support and Promotion Agency (ISPAT) President Arda Ermut. In response to a question about whether the ÖİB will take part in the operation of coal fields, Albayrak said the government wants to take advantage of the ÖİB's broad experience and seeks ways of developing a more efficient model. Stressing that Turkey has significant coal fields such as those in Afyon, Konya and Tekirdağ, which are capable of attracting major investments, Albayrak said that ISPAT can invite new investors to invest in coal fields. He added: "Energy supply security is essential and energy diversity makes regional risks manageable. We will not only iron out the kinks on our way, but also diversify energy resources."

Explaining that energy in Turkey's coal fields varies between 1,300 and 2,000 calories, Albayrak said that current technology enables the production of electricity by transforming low-calorie coal. "We will view China's super thermal technology from this perspective," he said.

Prefacing that Turkey currently has 73,000 megawatts of installed capacity regarding energy production, and that while 70 percent of it belongs to the private sector and 30 percent to the public sector, Albayrak said: "The private sector's stepping up should not be something to be worried about. As long as the rules are set as an applied right, there will be no problem. We can see that when state-owned power plants passed to the private sector in the past they worked more efficiently. However, I do not think that the state's total retreat from energy production is right. The public needs to have a meaningful share as well."

Citing Turkey's growth rate as progressing at 3 percent to 4 percent, he said: "The increase in our electricity production is moving at this level. However, Turkey needs more installed power. Within the next 10 years we need to produce new capacity of 50,000 megawatts. During this period $100 billion worth investments will be on the table." He also said that despite the troubled and difficult atmosphere in the area, Turkey's appetite for new investors is still ongoing.