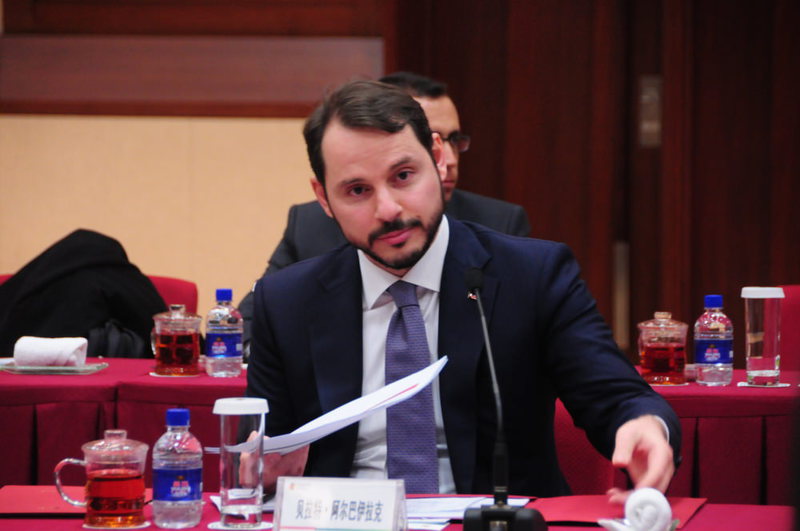 Energy and Natural Resources Minister Berat Albayrak met with the director of China's National Energy Administration, Nur Bekri, in Beijing yesterday in order to increase cooperation with China as well as diversify and ensure energy security. While stressing that Turkey is a critical energy hub in its region, Albayrak said: "We care about cooperation with China. As such, we will focus on investment cooperation." He also said that within the framework of Turkey's energy strategy, Turkey places importance on coal, nuclear and renewable energy resources. Albayrak said the economy grew four-fold since 2002 when the Justice and Development Party (AK Party) first became the ruling party. He also emphasized that Turkey's exports have grown at the same rate.

He also emphasized Turkey's exports have grown at the same rate. While both Turkey's and China's economies considerably grew over the past decade, Albayrak discussed President Recep Tayyip Erdoğan trip to China last year, and said it contributed significantly to increased cooperation between the two countries. Albayrak also said his visit will further contribute to Chinese-Turkish energy cooperation both at the business and bilateral level.

Meanwhile, Bekri emphasized that the visits paid between the two countries has always led to fruitful results.

Albayrak departed for China on Tuesday to discuss energy sector collaboration and expand Turkish-Chinese business relations. Earlier this week, Albayrak met with the giants of the wind power and coal mining sectors in Beijing along with representatives of solar power in Shanghai. During his four-day visit to China, Albayrak will attend high-level meetings, share Turkey's future goals and projects with the Chinese and discuss opportunities for greater collaboration and investment. Albayrak will also meet internationally renowned Chinese firms investing in finance, renewable energy, mining and thermal power plants. Albayrak's visit to China includes stops in Beijing, Weihai and Shanghai.

At his first stop, Albayrak visited the Wind Power Center in Beijing and met the world's most important wind power firms, followed by meetings with representatives of the China Development Bank and several finance institutions. Along with discussing economic stability in Turkey with Chinese firms, Albayrak will also call for expanded investment into Turkish projects. As the last stop of his Beijing program, Albayrak will meet the giants of the Chinese coal mining sector.

The last stop of Albayrak's four-day visit will be Shanghai where he will visit the Shanghai Nuclear Engineering Research and Design Institute, and meet the world's leading firms operating in the fields of thermal power plants and renewable energy. He will discuss Turkey's potential for coal mining, its renewable energy sectors and potential joint projects. Albayrak will also meet with prominent Chinese firms in the solar power sector in Shanghai.