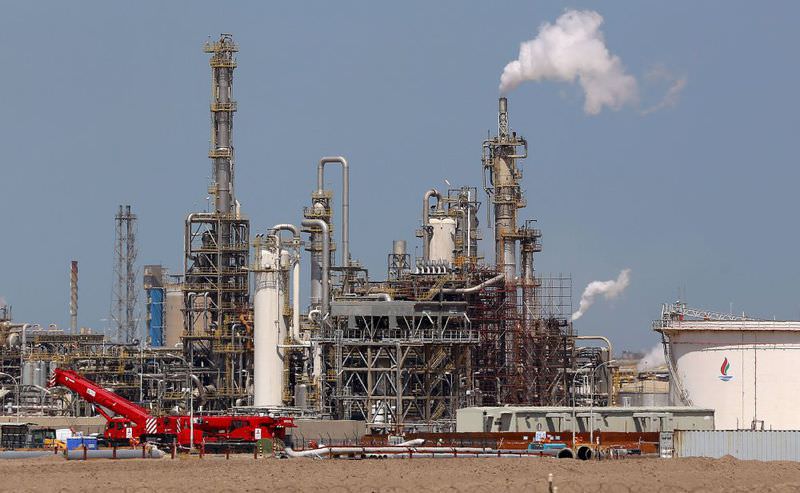 by Anadolu Agency Apr 20, 2016 12:00 am
Kuwait's daily oil production fell to 1.5 million barrels on Tuesday as an ongoing strike by Kuwaiti oil workers entered its third day, a Kuwaiti official said. Before the strike began on Sunday, Kuwait had been producing roughly 3 million barrels of oil per day.

At a press conference, Sheikh Talal al-Khaled Al Sabah, a spokesman for the government-run petroleum sector, insisted that crude oil production had returned to normal levels in northern Kuwait, citing an emergency plan aimed at reducing strike-induced losses. On Sunday, oil workers in Kuwait began an open-ended strike to protest proposed government cutbacks as the Gulf country struggles with a prolonged slump in oil prices. Thousands of workers gathered at the start of the local work-week in the town of Ahmadi, where the state-run Kuwait Oil Company has its headquarters, according to Dubai-based daily Gulf News. The Kuwaiti government has introduced a new payroll scheme for all public employees and wants to include the country's roughly 20,000 oil workers - which would mean an automatic cut in wages and incentives.

Kuwait's oil workers union has rejected the plan, however, and called for exempting the country's sprawling energy industry from the payroll scheme. Within the first few hours of the strike, Farhan al-Ajami, head of Kuwait's Union of Chemicals, said the labor action had been "more successful than expected," adding that the number of strikers was steadily increasing. As OPEC's fourth-largest oil producer, Kuwait currently manufactures 3 million barrels per day.

On Saturday, Wafaa al-Zaabi, CEO of the Kuwait Petroleum Corporation (KPC), warned that the strike could cost the national oil sector as much as $48 million in daily losses. She said the KPC had contacted the Egyptian General Authority for Petroleum and the Indian Oil Corporation with a view "to providing Kuwait with the necessary technical labor to operate the oil installations during the strike." She did not, however, elaborate as to the number of foreign workers who might be temporarily employed. For his part, Saif al-Qahtani, head of Kuwait's Federation of Petroleum Workers, which called the strike, said some workers were continuing to work "to supply electricity and water production plants with needed energy." Arab Gulf monarchies, which rely heavily on oil production, have been hard hit by the recent slump in global oil prices.
RELATED TOPICS