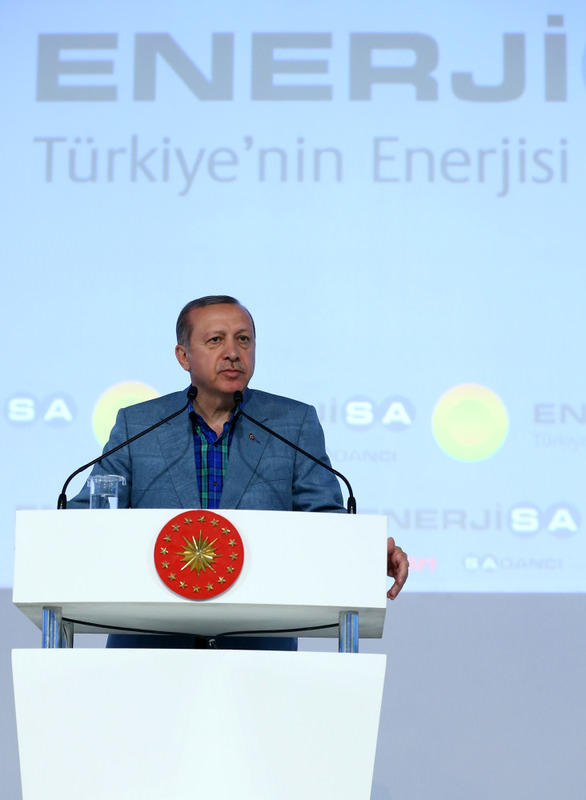 In line with increasing energy demand, President Erdoğan stressed that investments of $110 billion in the energy sector need to be made over the next 10 years in order to minimize energy dependency

President Recep Tayyip Erdoğan delivered an opening speech during the inauguration of Tufanbeyli Thermal Power Plant built by the Enerjisa energy company. It is the largest lignite coal thermal power plant established by the private sector in Turkey so far. Erdoğan said Turkey needs to invest $110 billion in the energy sector over the next 10 years, adding: "We aim to satisfy the energy demand by more effectively using our own resources such as coal and water and natural resources such as solar and wind power, and minimize our external dependence.

Explaining that Turkey has rich coalfields, despite not having natural gas or oil resources, Erdoğan said he is against importing coal and attaches importance to thermal power plants. He said that such investments must continue, adding: "More than half of our foreign trade deficit and a significant part of our current account deficit stems from the import of raw materials for energy." He said that Turkey has to use its potential power to achieve its 2023 goals.

In reference to Turkey's energy imports surging from $11.5 billion in 2003 to $55 billion in 2014, Erdoğan said the country managed to keep its energy imports at $38 billion due to the fall in oil prices last year. "Our need for energy rises further as our country develops, grows and progresses in all fields from industry to trade and from service sectors to infrastructure. The rise in the level of national welfare and urbanization as well as the more effective use of energy in all fields increases the demand for energy," Erdoğan said.

In line with Erdoğan's remarks, Energy and Natural Resources Minister Berat Albayrak, speaking at the ceremony, said that Turkey will use domestically-produced coal. Albayrak recalled that throughout the rule of the Justice and Development Party (AK Party), the consumption of local energy resources has always been prioritized. He added that the ministry has carried out the necessary drilling work in order to utilize Turkey's coal reserves efficiently. Albayrak also emphasized support given to the private sector with a view to ameliorating the investment environment and improving the working conditions in mines, adding they have been working on legal regulations specific to the coal industry to solve these issues.

Explaining that a country's welfare level is also related to its energy consumption, Erdoğan said the rise in Turkey's energy demand is highest among Organization for Economic Co-operation and Development (OECD) countries. He said that Turkey's demand for energy will continue to rise as it progresses toward achieving the government's 2023 goals.

Touching on Turkey's investments, Erdoğan asserted Western countries cannot understand Turkey by looking at terrorist incidents and called on these countries to look at investments. He extended thanks to those who contributed to the realization of the Tufanbeyli Thermal Power Plant.

Erdoğan firstly attended the opening ceremony of the Tufanbeyli Thermal Power Plant along with Sabancı Holding Chairman Güler Sabancı. He later went to the Adana Organized Industrial Site and initiated the joint openings of the facilities from here.

The Tufanbeyli Power Plant was conceptualized to bring the 246 million tons of lignite coal reserves located at the center of Yamanlı, Kayarcık and Taşpınar streets in Adana's Tufanbeyli district to the economy. The plant will have a 450-megawatt installed power capacity and produce 2.5 billion kilowatts per hour of electricity annually by consuming 845 tons of lignite coal per hour and 5.5 million tons of coal annually. The thermal power plant cost $1.1 billion and employed 4,500 people for its construction and 1,000 people permanently. It was designed to consume less water with a dry-type cooling system. There are also limestone quarries that will be used in order to provide limestone for the circulating fluidized bed (CFB) boilers and flue-gas desulfurization (FGD) systems. A flue gas treatment system enables limestone to be added to the oven and the wet FGD system was evaluated as an approved method that reflects the latest technology under the circumstances.

Meeting nearly 2 percent of Turkey's energy demand and producing energy for 1.5 million households, the Tufanbeyli Thermal Power Plant is slated to operate for 30 to 35 years, depending on coal reserves.

In conventional systems, flue gasses are discharged into the atmosphere through specially designed flues. In this facility, flue gasses will be discharged through the center of the cooling tower. This will enable pollutants to spread into the atmosphere better and therefore the ground-level concentration values of pollutants from the facility decrease.

The Ductile Cast Iron Pipe Factory in the Organized Industrial Site has had 5 percent manufacturing capacity of the ductile pipe manufacturing sector around the world along with this facility in Adana following the one in Samsun. The iron pipes manufactured in this facility founded by Samsun Makine Sanayi Inc. are renowned as peak technology of the 300-year cast iron and 150-year steel pipe manufacturing technologies. They can be used to carry biogases and chemicals along with potable water and drain water. As well as its resistance to corrosion and damage from earthquakes, they do not need welding isolation on its joints.