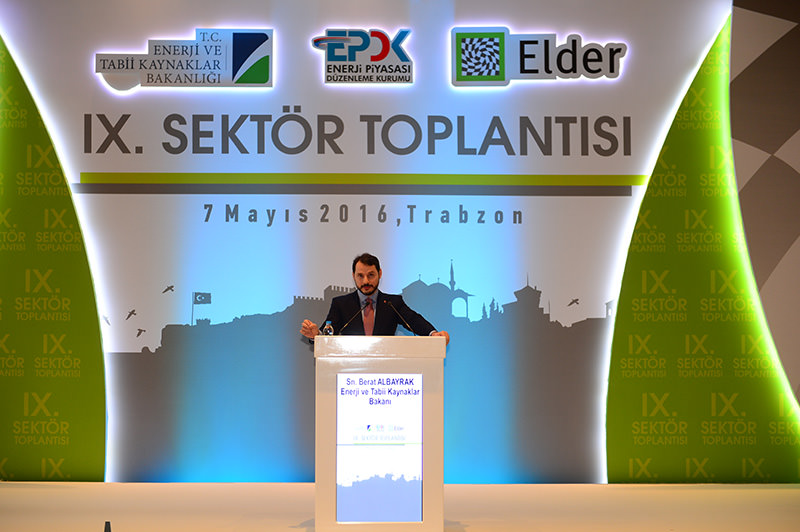 Energy and Natural Resources Minister Berat Albayrak announced that within the four-year period between the years of 2016 and 2020, electricity distribution in Turkey will become fully privatized and distributer companies will be followed closely by the ministry.

The energy ministry conducted a survey to evaluate 21 private electricity distributers' performances in the areas of customer satisfaction, call center services, price levels and infrastructure facilities. According to the survey, especially the call center service was the failing point for most companies. Albayrak noted that a special office under the ministry will follow the distributers, and the ones duly perform their duties will be supported, while the others getting fines.

Speaking at the ELDER's 9th Sectoral Meeting organized in Trabzon, Albayrak said his sub-unit would conduct planned or unplanned auditing over the distribution companies. Stating that the distributers would lead the way for the internal auditing implementations, Minister Albayrak said the systematic internal auditing will pave the way for productivity, and they would receive support from the outside.

According to Minister Albayrak, the threshold values which the distribution companies are obliged to apply regarding the power cuts were determined, and right to indemnity was provided for those who exposed to the cuts in number and period which will exceed the values. Stating that the annual threshold values and/or the daily limit violation of the cuts would be essential, Albayrak said in this case, without any application, the indemnity related to the violation of the annual threshold value would be paid to the related user by the distribution company with settlement method as of the following year's April month while the indemnity related to the violation of the daily 12-hour cut will be paid by means of sending a notice, by the distributor company in the following month.

Elder Board Chairman Nihat Özdemir said the survey shared by Minister Albayrak was a milestone for them and therefore the sector presented them with a roadmap. Stressing that they realized their shortcomings, Özdemir said the distribution companies should give weight to the call centers from now on. During his opening speech, Özdemir pointed out that 2016-2020 period served as a stress test in terms of private sector and KW/hour electricity price in the free market reduced from 9 cents to 4.5 cents due to the increase in dollar, also adding that with these numbers, the prediction in all the projects were baffled.

Albayrak indicated that the technical quality of the electricity presented in the distribution network operated by the distribution companies was measured by a certain amount of technical quality measuring devices installed in the middle and low voltage level. Stating that the devices were installed in the determined locations and the measurement results were documented by the end of the following month, Albayrak said this measuring system was for providing necessary recoveries in case of the detection of a technical quality problem in the related location. Besides, by measuring the service quality provided by the distribution company for the region in general, it aims to obtain a quality table and provide an input for reward-punishment mechanism.

Stressing that Turkey had a giant distribution network providing service for nearly 40 million subscribers on a 780.000 square kilometer area, Albayrak said Turkey is world's fifth and Europe's second largest network with important financial extents in the country's economy. According to Albayrak, a total of TL 101 billion will be spent only in electricity distribution sector within the upcoming 10 years, and these extents need managing properly.