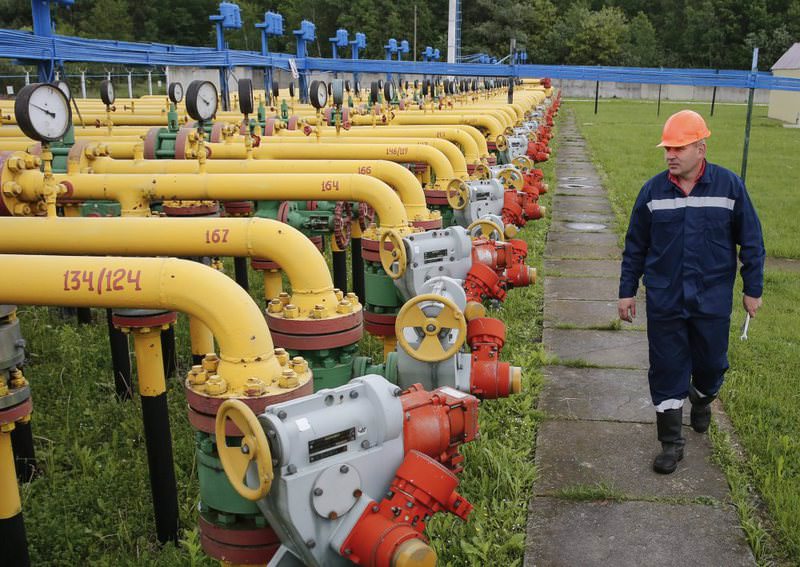 by Anadolu Agency May 17, 2016 12:00 am
Ukrainian ambassador to Turkey, Dr. Sergiy Korsunsky, said they were working with Turkish companies to provide storage in western Ukraine. Stating that Kiev is ready to provide the additional natural gas storage capacity Turkey needs, the ambassador said they are working with Turkish companies to allow usage of storage facilities in western Ukraine and that, although there is no current agreement, Naftogaz and the Petroleum Pipeline Corporation (BOTAŞ) are currently in contact.

Evaluating the energy agenda of Turkey and Ukraine, Korsunsky recalled that Turkey purchases nearly 27 billion cubic meters of natural gas from Russia annually. According to Korsunsky, it will not be impossible for Turkey to break its connections with Russia right away. Twenty-seven billion cubic meters of natural gas purchased by Turkey is not an amount that can be immediately replaced with liquefied natural gas (LNG), a fact that increases the importance of Azeri and Turkmen gas. Stating that Turkey had valid reasons to improve its LNG facilities, Korsunsky said the main problem lies with gas storage since the capacity of natural gas storages in Turkey is extremely limited. Stressing that Turkey might not build facilities that can store large amounts of gas due to geological hindrances, Korsunsky said, for this reason, they are currently working with Turkish companies to use storage facilities in western Ukraine. The ambassador also stressed that Turkish experts have visited the storage facilities and are familiar with their structure.

Indicating that Turkey bought the only gas it could store from Russia, Korsunsky said Russia might oppose Turkey's storage use in Ukraine. The ambassador said some arrangements could be made for the gas storage, which would come from the Trans Anatolian Natural Gas Pipeline (TANAP) project, and added that there would not be any legal problems. According to Korsunsky, things should be followed step-by-step. Turkey should first source gas from alternative sources before Ukrainian storage would be ready to use - similar to how Turkish gas used during the winter is stored in Ukraine during the summer. He also said oil may be sold to Europe without incident. Stressing that the total capacity of natural gas storage in Ukraine was 34 billion cubic meters, Korsunsky said: "We are in contact with Turkey and Europe. The storage facilities are yours. We guarantee that no matter how much gas you place in storage, you will take the same amount back. Apart from the 16-to-17-cubic-meter that Ukraine uses, it is possible for Turkey to use a capacity of nearly 17-to-18 cubic meters. If the market is available, you can sell as much gas as deemed necessary from this capacity."

Collaborations with the US

Korsunsky said in the coming years, many LNG cargos from the United States would go to Europe and Asia, making the natural gas market globally more integrated. He added that his country wants to purchase LNG from the U.S. as well. Emphasizing that Ukraine does not currently have sufficient infrastructure for LNG terminals, Korsunsky suggested that Turkey make deals with Azerbaijan and Turkmenistan in order to vary its energy sources as well as make certain deals with the U.S. and Qatar for LNG. The U.S. is planning to raise the number of LNG terminals from nine to 20, after which it will begin exporting more LNG to the world market. Stressing that the natural gas market would be just like the oil market, Korsunsky said natural gas would be cheaper and more accessible, noting that the real question is how Turkey will shape its infrastructure.
RELATED TOPICS