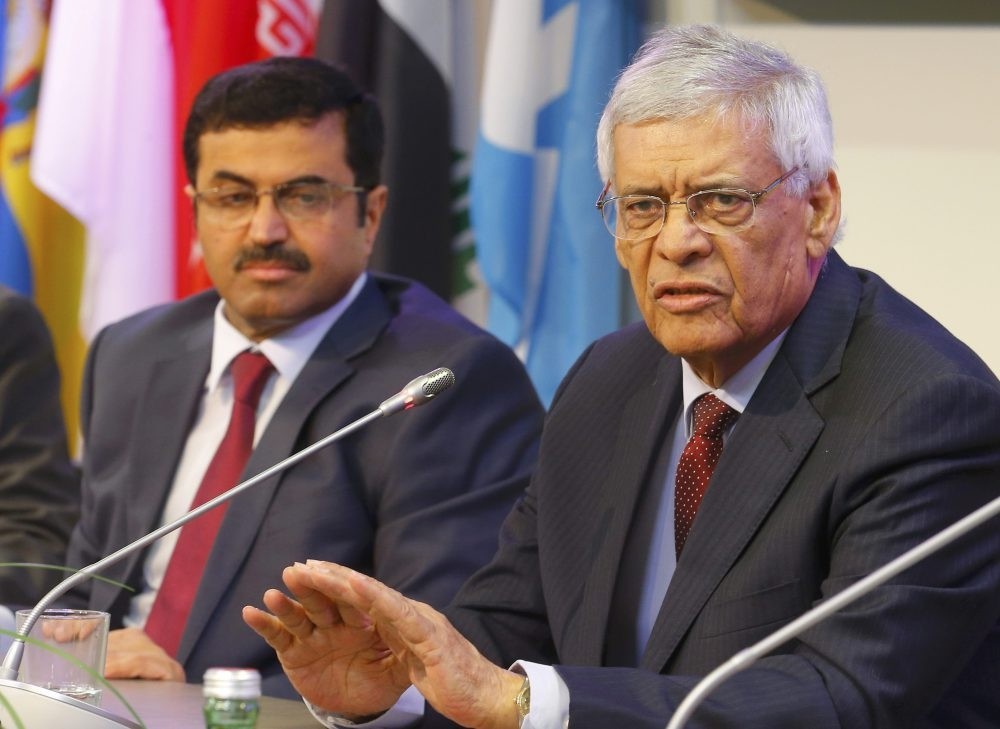 Qatar Energy Minister and OPEC Chairman Mohammed al-Sada (L) and Secretary-General Abdullah al-Badri address a press conference after an OPEC meeting in Vienna, on June 2.
by Associated Press Jun 03, 2016 12:00 am
With higher crude prices bringing some relief, OPEC officials meeting Thursday focused on trying to find common ground on how much to produce in an attempt to re-impose the image of the organization as a major player in determining supplies and prices.

For decades, the 13-nation cartel was able to regulate prices by throttling or increasing production. But with some members not sticking to the limits and outside players increasing their market share, recent meetings have failed to re-impose unity.

In fact, though, attempts to impose production ceilings have foundered over recent years, with countries ignoring them and producing as much they wanted or could.

The final statement at the last meeting, in December, didn't even mention an output target, signaling the cartel's eroding ability to influence supply, demand — and prices.

One way out would be abandoning attempts to set a firm production target. Ministers at Thursday's meeting could instead agree on a sliding ceiling that could shift between two benchmarks, both above 30 million barrels a day. That would be a first, and the fact that the ministerial meeting dragged into mid-afternoon reflected that not all agreed on such a move.

"The group is under a lot of pressure to reassert itself as a viable entity," said Jason Schenker of Prestige Economics. "To achieve that, they are likely to achieve a production target of sorts."

A flexible ceiling also could address Iranian resistance to curbing its output. Since the lifting of nuclear-related sanctions this year, Iranian production has roared back to nearly four million barrels a day, around the same level as before the imposition of the sanctions.

Reflecting its stance, Iran did not even show up at a meeting in April between OPEC members and outside producers attempting to agree on a joint output freeze to push prices higher. The Saudis then said they would not cap output if Iran didn't do the same, dooming the gathering to failure. Suggesting the organization's credibility was on the line in Vienna after that abortive meeting, Schenker declared: "This is a make or break moment for OPEC."

The ministerial gathering comes amid a recovery in the price of oil. Since touching a 13-year low early this year, it has rallied almost 90 percent to around $50 a barrel. On Thursday, the international benchmark, Brent, was up 22 cents on the day at $49.93.

While that's still only half of what crude fetched as late as two years ago, the increase is easing some of the pain for poorer members such as Algeria, Venezuela and Nigeria that depend on crude as their main income. And there are promises of further increases.

U.S. shale production is in decline as it needs higher prices to be economical. At the same time, the world economy is showing signs of some improvement, meaning that the appetite for petroleum may increase.

Ironically, part of the credit for OPEC's improving fortunes is due to its inability to act in unity in recent years. Instead, many individual members produced what they could, driving down prices to the point where shale producers are increasingly unable to compete. Some have gone out of business, reducing the glut of global supply.

At the height of its power decades ago, OPEC essentially was able to set world prices and supplies. Although it is still responsible for more than a third of world production, that clout has eroded since the 1980s, as outside output increased and members looking to maximize income increasingly ignored OPEC production ceilings.
RELATED TOPICS