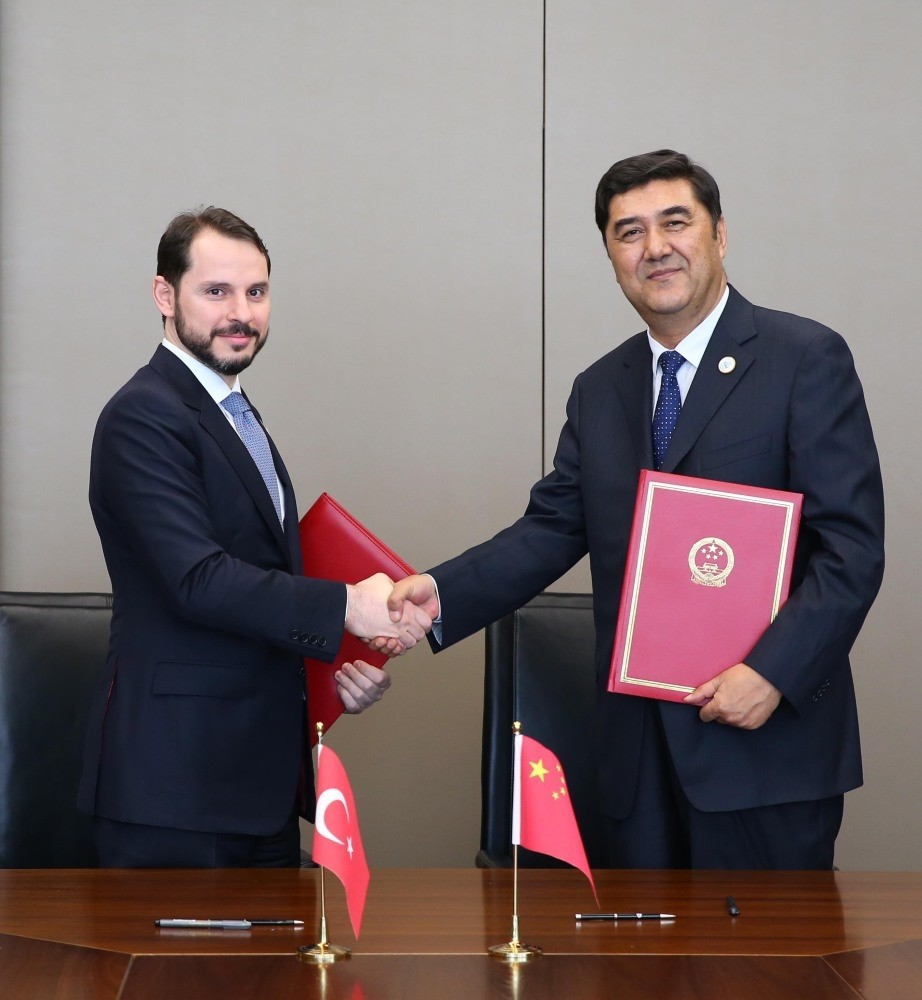 Energy and Natural Resources Minister Berat Albayrak (L) and Chinese National Energy Administration Director Nur Bekri signed a memorandum of understanding for the mutual development of the nuclear technology and cooperation between Turkey and China.
by daily sabah
Jun 30, 2016 12:00 am

During his visit to China to attend the G20 Energy Ministers Meeting, Energy Minister Albayrak signed a memorandum of understanding with his Chinese counterpart with the aim of the mutual development of nuclear technology and cooperation between Turkey and China

Energy and Natural Resources Minister Berat Albayrak and Chinese National Energy Administration Director Nur Bekri signed a memorandum of understanding regarding the cooperation between the two countries in the field of nuclear power, yesterday. The memorandum covers the mutual development of the nuclear technologies and cooperation between Turkey and China.

Arriving China in the morning with local time for the G20 Energy Ministers Meeting in Beijing, Minister Albayrak also attended the opening ceremony. After the family photo shooting and opening session, Albayrak held a series of bilateral meetings.

Albayrak's first meeting was with European Commissioner for Climate Action and Energy Miguel Arias Canete. Canete started his speech by condemning the terrorist attack that hit Istanbul on Tuesday and uttered his condolences. Energy collaboration between Turkey and EU, energy section in particular, was discussed during the meeting. Following his meeting with Canete, Albayrak came together with International Energy Agency Executive Director Fatih Birol and Japanese State Minister Tasuga Takegi. Takegi also condemned the terrorist attack at Istanbul Atatürk Airport and gave his condolences to Turkish people through Albayrak.

Albayrak held his last meeting with Chinese National Energy Administration Director Nur Bekri. During this meeting, the two ministers signed the memorandum of understanding regarding the mutual development of nuclear technologies and cooperation between Turkey and China. It was also indicated that the two ministers agreed upon reflecting the strong cooperation in the field of energy to the other fields.

Albayrak talked about Turkey's investment opportunities in energy, coal and renewable energy in particular, and invited Chinese firms to invest in Turkey. While the first day meetings came to an end with dinner, Albayrak will moderate the session titled "Expectations, Opportunities and Threats for International Energy Development," and give a speech.

In March, Albayrak traveled to China again to discuss collaboration in the energy sector. Albayrak met the giants of the wind power and coal mining sectors in Beijing along with representatives of solar power in Shanghai. During his four-day visit to China, Albayrak attended high-level meetings, share Turkey's future goals and projects with the Chinese and discuss opportunities for collaboration and investment. However, this visit was merely devoted to deals to be signed with Chinese counterparts.

At his first stop, Albayrak visited the Wind Power Center in Beijing, and meet the world's most important wind power firms, later followed by meetings with the representatives of the China Development Bank and several finance institutions. Later he met Bekri, and discussed the collaboration between Turkey and China regarding the energy sector as he did in his latest visit as well. As the last stop of his Beijing program, Albayrak met the giants of the Chinese coal mining sector. Another important agenda topic for the China visit was again nuclear power. Albayrak later visited the city of Weihai and examined the Chinese national State Nuclear Power Technology Corporation's CAP-100 Nuclear Plant (a so-called "third-generation" Nuclear Plant). The last stop of Albayrak's four-day visit was Shanghai where he visited Shanghai Nuclear Engineering Research and Design Institute, and met the world's leading firms operating in the fields of thermal power plants and renewable energy. He discussed Turkey's potential for coal mining and renewable energy sectors, and possible shared projects.