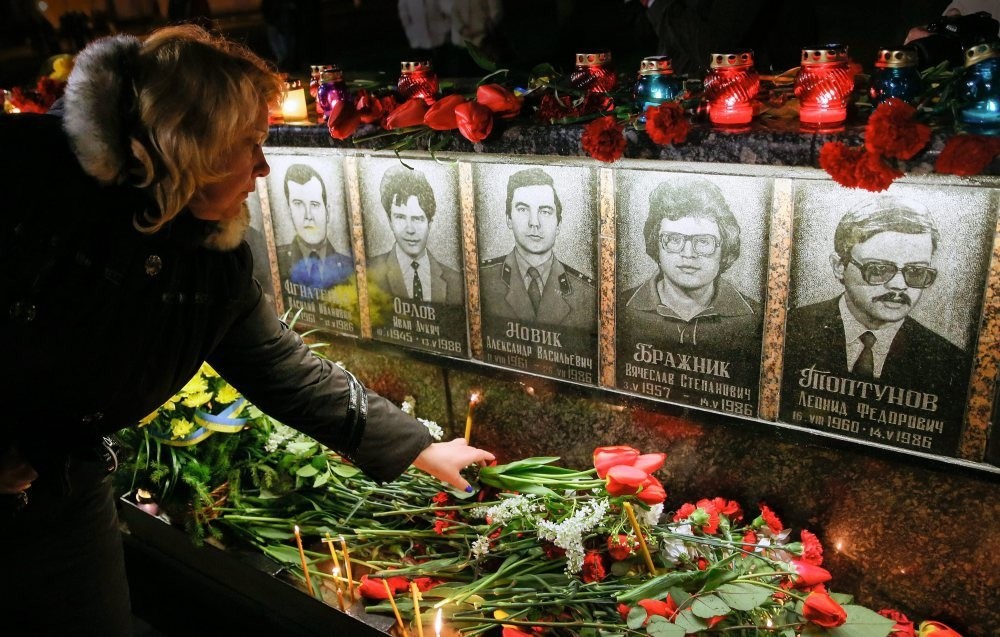 A wdman lays flowers at the memorial the u2018liquidators' who died during clean up after the Chernobyl nuclear power plant disaster, during a ceremony in Slavutich, Ukraine.
by Aug 08, 2016 12:00 am

Imagine one of the largest solar farms ever at the site of the world's worst man-made nuclear disaster that struck Chernobyl in modern-day Ukraine and sowed panic across Europe. That is the grand vision of Ukrainian Environment Minister Ostap Semerak, backed up by big-time investors such as the European Bank for Reconstruction and Development (EBRD). The Chernobyl catastrophe of April 1986 left thousands dead or dying and created a contaminated no-man's land in northern Ukraine in which only a few hundred elderly people still cling on to their homes. The 30-kilometer-wide "exclusion zone" surrounding the stricken station is primarily covered in forests and filled with radiation levels that make most foods produced there unsafe.

But Ukraine believes there are also around 6,000 hectares of open land that can be filled with solar panels that may one day produce about as much energy as Chernobyl's ill-fated reactor number four did in its time. The EBRD has already said it was willing to support the project as long as Ukraine attracted the $1 billion needed to fulfil its first stage.

"A fairly large number of various companies across the world are interested," Semerak told AFP.

"I think that, in case of successful negotiations, this project could be launched in full next year."

Ukraine is keen to break its dependence on energy giant Russia in the wake of a 2014 pro-EU revolution that was followed by the Kremlin's annexation of Crimea and the outbreak of a pro-Moscow insurgency in the country's east that has claimed more than 9,500 lives. About 50 percent of the former Soviet republic's energy is still produced by its remaining nuclear stations. Thermal power generation makes up for much of the rest. Official statistics show solar panels accounting for less than one percent of the energy consumed in Ukraine. The very first stage of the project should see Ukraine partner up with two private foreign firms to build a few small solar plants that generate about six megawatts of power by the end of this year. That is still just a tiny fraction of the 4,000 megawatts pumped out by Chernobyl in its Soviet-era heydays.

Semerak thinks investors will be drawn by existing electricity lines and a professional personnel that is working on cleaning up the remainders of the Chernobyl station and installing a giant dome around it to keep the atmosphere safe. Semerak adds that purchasing land required for the solar farm is remarkably cheap because it is unsafe for farming and has little other use.

"The radiation level have dropped immeasurably over the past 30 years," Semerak said in a telephone interview.

"Of course, this territory still cannot be used for farming," he said. "But it is suitable for innovative and scientific project."

Semerak added that the project's success would create other possibilities for what is considered one of the most unhealthy parts of Europe that would see Chernobyl become an "innovation zone."

Yet questions remain about whether Semerak's plan is actually feasible. Foreign investors view Ukraine with a great deal of caution because of the separatist conflict and its tensions with Russia as well as corruption that has permeated both the government in Kiev and the regions.

"I think this project will require a great deal of money," Dmytro Lukomsky of the Rentechno solar station construction firm told AFP. "If we find the investors, the prospects are fairly good. And if we do not - the chances of things working out are small."
RELATED TOPICS