Dreams of wealth, fears of problems as Guyana finds oil

U.S.-based ExxonMobil has announced a "world-class oil discovery" off Guyana after drilling a well that struck oil-bearing sandstone with an estimated capacity of 800 million to 1.4 billion barrels of oil

Sleepy Guyana has long been one of the hemisphere's poorest places, a sparsely populated nation on South America's northern shoulder that relies heavily on exports of sugar, rice and gold. But these days, there's a surge of excitement about an anticipated windfall from major oil-and-gas deposits found in the deep seabed 120 miles (193 kilometers) off the coast - as well as worries about the disruptions and conflicts it might bring. 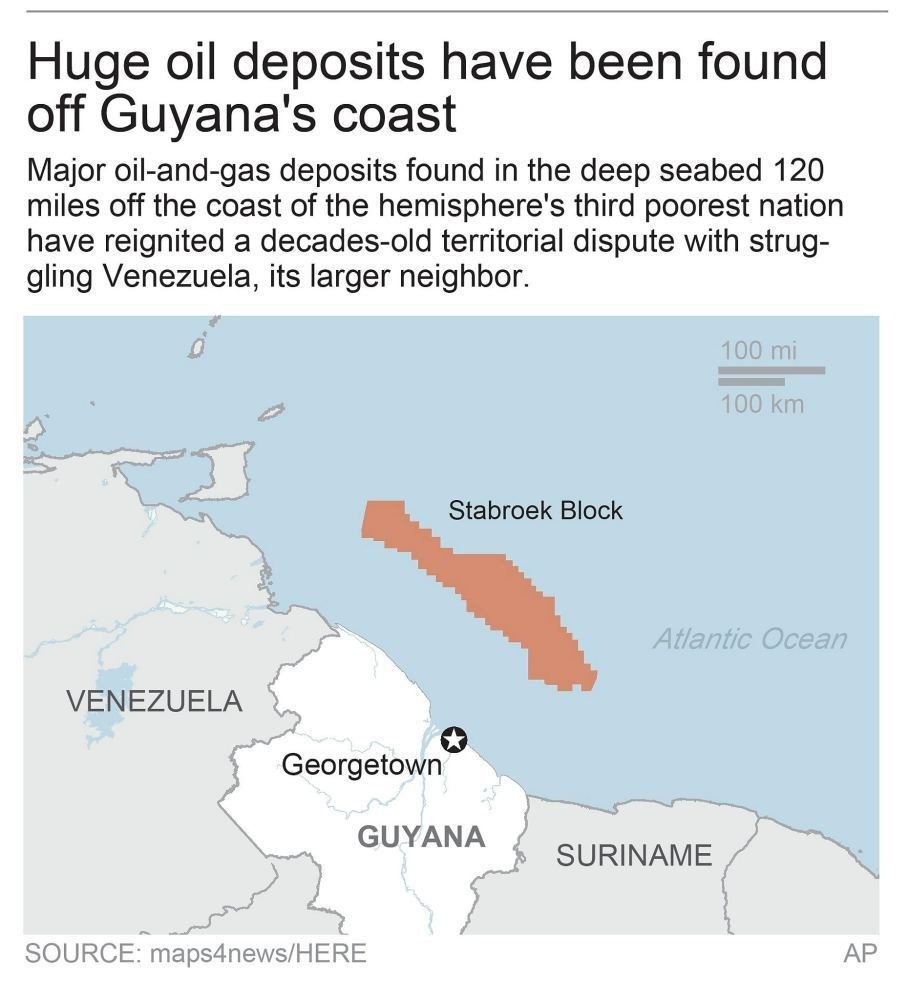 Hopes are high that fuel siphoned in a few years' time from more three miles (more than 5 kilometers) below the sea's surface might be an antidote to entrenched poverty and underdevelopment in the country of 750,000 people.

"We will have billions in foreign reserves and our population is going to swell big time," miner Cosmos Santo said from a park bench in the seaside capital of narrow streets and mostly low-rise, wooden buildings.

The U.S. Geological Survey had long estimated that offshore Guyana was rich in gas and oil. Now U.S.-based ExxonMobil has announced a "world-class oil discovery" off Guyana after drilling a well that struck oil-bearing sandstone with an estimated 800 million to 1.4 billion oil equivalent barrels. Exxon and partner Hess Corp. haven't yet announced development or investment plans, which could be complicated by low current oil prices and a dispute with neighboring Venezuela.

But Guyanese authorities are racing to set up rules and plans to administer the hoped-for new industry while avoiding what is known as the "resource curse." In places like Congo and Nigeria, oil or mineral wealth has fueled conflict instead of development. Guyana only has to look at Venezuela next door to see what can go haywire with an oil-dependent state. South America's biggest energy producer has been in economic freefall since the 2014 crash in prices for the oil that funds nearly all the spending of its socialist government. Guyana's presidential spokesman, Mark Archer, said the administration is determined to avoid the mistakes of Venezuela and other energy-rich nations that have run into hard times.

"The plan is not to spend wildly like a drunken sailor but to put in a wealth fund for future generations and ensure we do not neglect agriculture," Archer said. Norway and the U.S. Energy Department are advising Guyana on setting up such a fund as well as a regulatory framework for the industry, Natural Resources Minister Raphael Trotman says.

Some of the hoped-for riches would go toward building a 350-mile (565-kilometer) jungle road from the capital to northeastern Brazil, opening up Guyana's rugged, mineral-rich interior. Households would get free cooking gas and cheap gasoline. Guyana's small military would get new aircraft to protect the offshore fields and borders, to provide some "comfort to Exxon and other investors," Archer said.

"We must be able to protect our investment," he said.

Protection may be necessary because the offshore discoveries have reignited a decades-old territorial dispute between Guyana and far-larger Venezuela. Venezuela has for decades claimed two-thirds of Guyana's territory as its own, arguing that the gold-rich region west of the Essequibo River - and the resulting maritime zone where Exxon's find lies - was stolen from it by an 1899 agreement with Britain and its then-colony.

Venezuela's navy briefly detained a ship carrying five American oil workers in 2013. They were conducting a seismic survey under a Guyana concession at the time. Guyana says it wants the International Court of Justice to settle the border dispute with Venezuela, though the case has not yet reached the court. Diego Moya-Ocampos, analyst with the London-based consulting firm IHS Global Insight, said he believes Venezuela's claim of sovereignty will pose a "major complication" to recovering oil and minerals. Venezuela's government could opt to ban companies operating in Guyana from working in Venezuela's vast oil fields, he said.

"We expect strong rhetoric in the coming months. Nevertheless, (Venezuela) is highly unlikely to initiate an armed conflict out of concern over losing support from the English-speaking Caribbean countries," Moya-Ocampos said in an email.

Exxon officials have told lawmakers that they plan to have supertankers pull up alongside rigs and cart away fuel pumped from the seabed because the wells are too far from the coast to run pipelines. People in Guyana appear to be excited about the prospects, though some are wary.

"If mismanaged, we will remain as we are and like the others which have oil and mismanaged it," said Brenda Oudkerk as she took a break from dishing out plates of rice and spicy chicken at her open-air cafe in the capital.
RELATED TOPICS