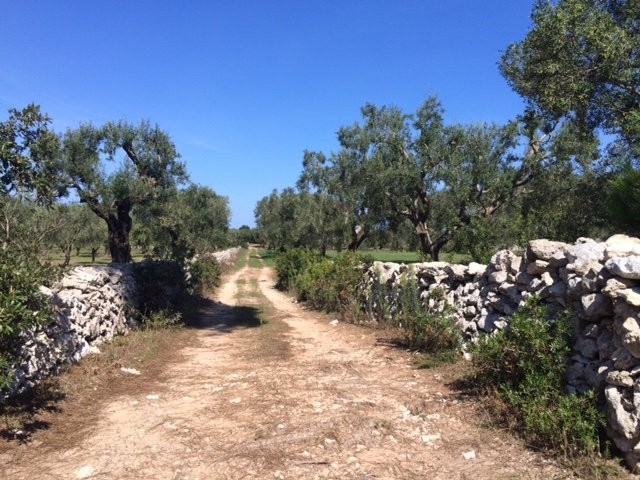 A grove of century-old olive trees is seen in the southern Italian village of Melendugno, near Lecce.
by Oct 05, 2016 12:00 am

The 231 trees, surrounded by stone walls plain near the Adriatic coast, stand in the way of a $45 billion pipeline designed to bring gas from central Asia and help wean the EU off its dependence on Russian energy

In the name of European energy security, a private guard wearing a navy blue uniform, aviator sunglasses and a baseball cap walks around a grove of olive trees in southern Italy. The 231 trees, surrounded by dry-stone walls on a dusty plain near the Adriatic coast, stand in the way of a $45 billion pipeline designed to bring gas from central Asia and help wean the European Union off its dependence on Russian energy. Local authorities want the pipeline re-routed away from the prized grove, which includes trees thought to be more than 400 years old, but developers have Rome's approval to proceed, on condition they are transplanted while pipes are laid and buried. Wary of protests, the pipeline consortium, which includes Britain's BP, Azeri state energy company SOCAR and Italian gas company Snam, has hired 24-hour security. In reality, work on the Italian side of the Trans Adriatic Pipeline (TAP) cannot proceed without local consent, threatening to delay a project that is meant within four years to carry the equivalent of 10 percent of Europe's Russian energy imports.

The olive grove, whose oldest trees are recognised as part of the world heritage by UNESCO, represents more than a weak link in European energy security. It also highlights an issue at the heart of Italy's biggest constitutional reform debate in a decade: the power of local authorities to thwart Rome. Prime Minister Matteo Renzi proposes to dilute that power in a Dec. 4 referendum.

"None of the regions are happy with this reform because they fear they will be weaker in the face of the central government and will have to suffer things they don't understand, like TAP," said Michele Emiliano, the regional governor of Puglia, Italy's biggest olive oil producer and a popular tourist spot.

Italy's economic development minister has previously accused Puglia's government of using the grove near the town of Melendugno, and thousands of other trees further along the path of the pipeline, as an excuse to block the project.

"If it passes the referendum will ensure a more sensible division of powers, especially in the energy sector," the minister, Carlo Calenda, told Reuters in an email. The TAP consortium, which also includes Belgium's Fluxys , Spain's Enagas and Switzerland's Axpo, says it has asked Rome to work with Puglia to finalise tree removal and is confident the issue can be resolved soon.

"Even if the go-ahead is delayed it would only mean a narrowing of the time frame for moving the trees, not a stop to the project," said TAP's country manager for Italy, Michele Mario Elia.

There were few signs of life when Reuters visited the olive grove outside Melendugno just over a week ago. Apart from the security patrols, there were some fenced-off areas where archaeologists are required to make preliminary excavations, to check for any buried antiquities before the pipeline work can begin."There is a risk that some olive trees won't survive," said

Melendugno mayor Marco Poti, explaining that transplanting them could expose them to xylella, a bacteria that has wiped out tens of thousands of trees in recent years. The 878-km (546 miles) TAP project will run from the Turkish-Greek border and carry gas across Greece, Albania and the Adriatic Sea to the small Italian beach of San Foca. It is the last stage of the so-called Southern Gas Corridor that is meant to pump 10 billion cubic metres (bcm) of gas each year, expandable to 20 bcm, from Azerbaijan's giant Shah Deniz II field into European markets.

For Brussels, it is a way of diversifying away from Russia, the EU's top energy supplier.

In Melendugno 's sleepy town square, views are split. Some believe the investment will breathe new life into the area and others fear it will threaten the region's tourism.

"The town is divided but the majority doesn't want the pipeline," said 72-year-old pensioner Pantaleo, standing beneath a tree in the square, chatting to friends.

Another local concern is that the pipeline will make landfall at the popular Puglia beach of San Foca, on the Salento coast, famous for its sparkling blue waters. TAP plans to bury the pipe about 10 metres below the beach.

"Would you bring your little girl to build sandcastles over a pipeline with a pressure of 145 bars?" mayor Poti says. But the developers say gas pipelines have been built beneath eight other top Italian beaches without any impact on tourism.

"Spain's Enagas has also recently built a gas pipeline under the famous Cala Gracio beach at Ibiza and there's been no impact on tourism at all," said TAP's Elia.

As part of the project, an underground concrete tunnel will extend 700 metres inland and 800 metres out to sea where general contractor Saipem will join it to the undersea pipeline laid out under the Adriatic. Saipem has agreed to pull the pipe through the tunnel in winter when few tourists are around. On the other side, gas grid company Snam will build a 55 km pipeline to link TAP to the national grid.

Puglia's governor, Emiliano, wants the pipeline to land further north at the city of Brindisi where he says it could connect directly to Snam's existing gas network.

"Neither the government nor TAP has explained to us why it has to arrive so far south," he says.

But TAP executive Elia says studies showed the Brindisi option to be unfeasible. The central government insists local authorities were involved throughout the permit process. TAP developers secured government clearance for the pipeline on May 20 last year. But Renzi's government attached 66 demands - some of which can only be fulfilled with the cooperation of local authorities. The clock is ticking.