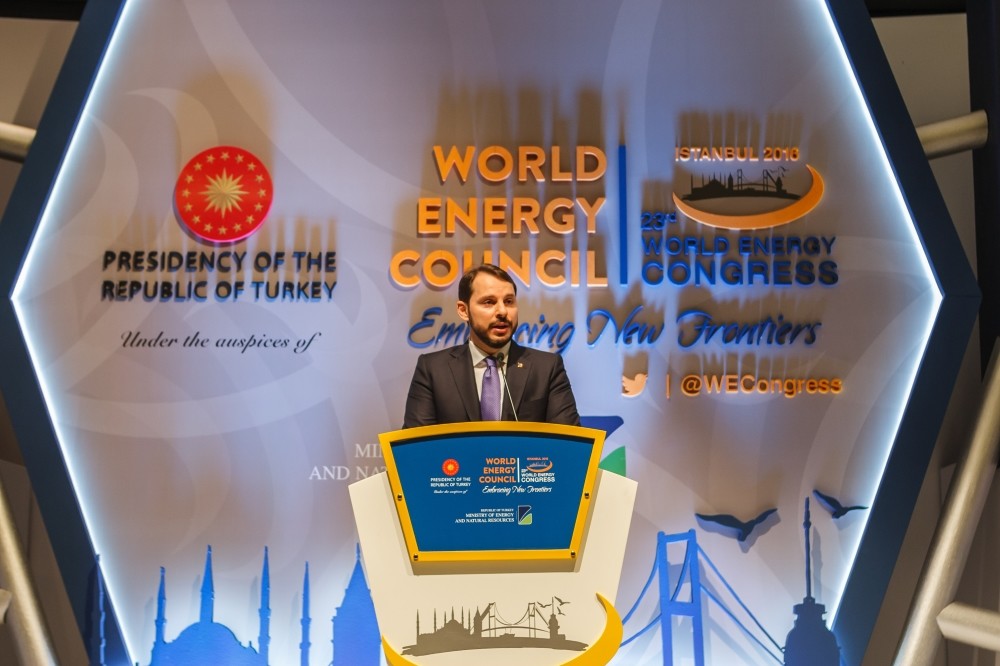 Energy and Natural Resources Minister Berat Albayrak speaks during a press conference in Istanbul as the 23rd World Energy Congress kicks off.
by Merve Aydoğan Oct 10, 2016 12:00 am

More than 250 ministers and CEOs along with four government leaders meet in Istanbul for the 23rd World Energy Congress. The congress will not only address opportunities and cooperation in the field of energy but also contribute to regional stability, according to Minister Albayrak

The 23rd World Energy Congress in Istanbul started with full commitment to the philosophy of sharing for peace in the era of global crises. Turkey's Minister of Energy and Natural Resources Berat Albayrak made the official opening speech Sunday by underlining that the congress will not only address opportunities and cooperation in the field of energy but also contribute to regional stability. The congress will bring together four government leaders including Russian President Vladimir Putin, Azerbaijani President Ilham Aliyev and Venezuelan President Nicolas Madura, along with Turkish Republic of Northern Cyprus (TRNC) President Mustafa Akıncı. Minister Albayrak said the congress will host more than 250 ministers and CEOs. The 23rd World Energy Congress will be held on Oct. 9-13 with the participation of key figures in policymaking and 265 speakers from 82 countries in more than 60 meetings.

Speaking at a press conference Sunday, Minister Albayrak said, "We are to discuss current projects and possible cooperation opportunities with participants from around the world. It [referring to the congress] is to provide a very positive synergy." Underlining that the theme of the congress is "sharing for peace," Minister Albayrak also said that global shareholders are to provide significant contributions and comprehensive solutions to problems, saying, "[The congress will] not only address current issues regarding the energy sector but also provide an in-depth analysis regarding politics and international relations."

Continuing on by saying Turkey is an example to the West and the East on long-lasting political stability in its region while continuing to support and contribute to establishing peace in the region, Albayrak said, "We have entered a new era in energy." Despite regional instability and the threat imposed by various terror groups, Albayrak said Turkey is to be the "driving force" in energy generation and distribution. In regards to the PKK terrorists' killing of nine soldiers and injuring 11 others including civilians in a bomb-laden vehicle attack on a gendarmerie checkpoint in the Şemdinli district of Turkey's southeastern Hakkari province on Sunday, Minister Albayrak strongly condemned the attack and urged the international community to take a common stance against terror.

As the four-day program will begin with a focus on future visions for the global energy industry, the second day will focus on business opportunities and resource management, as well as responses to new challenges of adaptation and innovation to ensure a secure, reliable energy system. The third day of the congress will address policy implications, with sessions designed to discuss the necessary institutional change to balance the World Energy Trilemma - energy security, energy equity, and environmental sustainability. The final day of the congress will solely focus on Africa, with sessions exploring critical drivers and innovations working to secure a sustainable energy future for the region under the topic of "Africa: Securing a Sustainable Energy Future."

Serving as the first global energy event held following the Climate Change Conference (COP21) in Paris, the World Energy Congress will focus on the effects of new technologies on corporate structures. Pointing out that the energy market and structure that will emerge 20-30 years from now will be discussed, Mercan said developments in coal, nuclear energy and sustainable energy will also be discussed. In the congress, problems in terms of experts, politicians and energy investors with regards to the Middle East and Turkey will be evaluated under the title of "energy security."
RELATED TOPICS