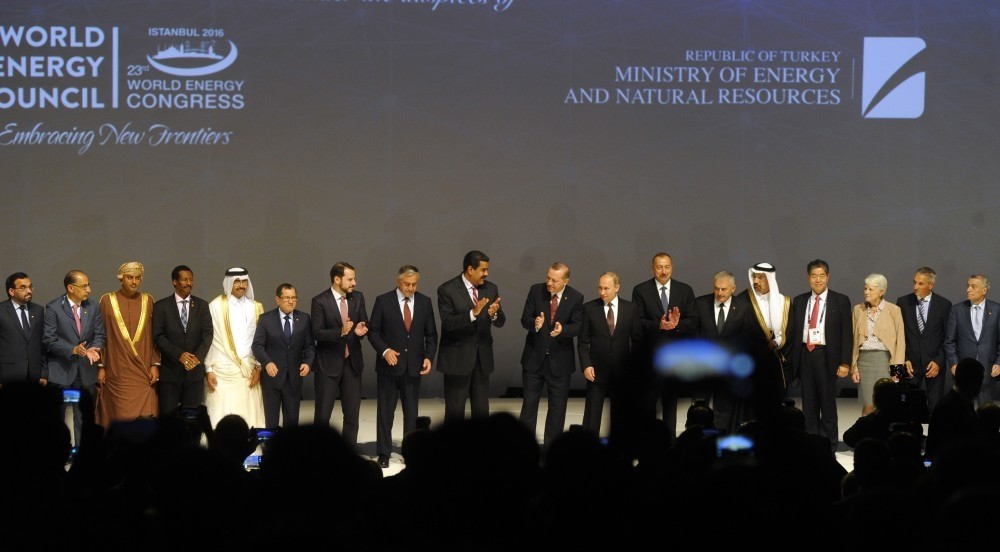 With the participation of 250 ministers and CEOs along with the attendance of key policymakers at the 23rd World Energy Congress, the main focus of the remarks made by the world leaders Monday were on energy supply security and diversification of energy

The 23rd World Energy Congress has entered its third day of events in Istanbul with the "sharing for peace" motto as world leaders from Russia, Azerbaijan, Venezuela and the Turkish Republic of Northern Cyprus (KKTC) along with Turkey's President Recep Tayyip Erdoğan attended on Monday. With the attendance of 250 ministers and CEOs as well as participation of key figures in policy making and 265 speakers from 82 countries in more than 60 meetings, the main focus of the remarks made by the world leaders on Monday have stressed on the energy supply security as well as diversification of energy. As the second day of the congress began with opening remarks by the Co-Chair, Chairman and CEO of World Energy Council, Younghoon David Kim who had also express his thanks to Turkey's President Erdoğan for his leadership and personal support for the World Energy Congress event, he also urged the energy sector leaders to embrace new frontiers. Despite the instability and insecurity not only in the region but also throughout the world caused by crises, conflicts and terror, energy remains as major component in global relations. With this respect, the World Energy Congress in which is described as an event of "World's Energy Olympics"by President Erdoğan aims to reach people worldwide with the motto of "share for peace."

"Our goal through the congress is to not only establish platform to exchange ideas regarding energy's vision and scenarios towards future but also to make energy a tool for peace and justice," said President Erdoğan. While the four-day program will address various topics on future visions for the global energy industry as well as opportunities, the final is solely designated on Africa, with sessions exploring critical drivers and innovations working to secure a sustainable energy future for the region under the topic of "Africa: Securing a Sustainable Energy Future." While Turkey has long-lasting relations with the African region not only due to historical and cultural ties but also due to its humanitarian approach within the relations, President Erdoğan also underlined during the congress that Turkey has different approach towards Africa than other countries as he also said, "We [Turkey] aim to revitalize our relations with Central and Northern Africa under the historical and strong humanitarian values." Continuing on by stressing that development, investment and growth cannot be established without securing energy, President Erdoğan further noted that there are 1,1 billion people throughout the world without electricity while 650 million of them are from Sub-Saharan Africa.

President Erdoğan have noted that the country is working on securing its energy demand and diversifying its energy sources. As the Turkish Stream project is designed to transfer Russian natural gas to Europe via the Black Sea and Turkey, President Erdoğan said that work on the Turkish Stream natural gas pipeline project is continuing and development of the second stage of the project will depend on natural gas market conditions in Europe. He further noted that Turkey is seeking ways to implement plans for a third nuclear power plant and aimed to produce 10 percent of its electricity from nuclear power in the years ahead. Stressing that Turkey is to take critical steps by the end of this year and throughout the year of 2017, Erdoğan said,"We establish great investments by the end of this year and in 2017. Thus, we will be closer to becoming a reliable partner in natural gas trade with all countries in our region."

Adding to President Erdoğan's remarks, Russian President Putin said that Russia aims to abide by the Paris Agreement and reduce CO2 emissions to focus on renewable energy. "We are moving toward clean energy and renewable energy resources but we cannot say that gas consumption is going down," he told the audience. In regards to supplying energy to the EU, Putin said, "We have been providing energy to the EU for the past 50 years and we are now working on a second project. We are discussing the Turkish Stream with Erdoğan and our other partners and we want to bring this to fruition." Along with Putin, Azerbaijan President Aliyev vowed to continue Azerbaijan's cooperation in the field of energy with Turkey while stating that investments will reach $20 billion. While reconciliation talks on the divided Cyprus island continue, KKTC President Akıncı noted that if a possible United Cyprus Federation were established, energy security and access to energy would see a significant increase worldwide. He also added that such an establishment in Cyprus would also improve bilateral relations and cooperation between Turkey, Greece, Israel and Egypt.

Also speaking at the World Energy Congress in Istanbul, Venezuelan President Nicolas Maduro urged for new mechanisms to be put into place to drive up oil prices saying, "Prices are not sustainable anymore and have fallen to their lowest levels in the last 40 years. ... We are seeing them fall to below the cost of production. Prices must be fairer and more realistic. ...for investment we need fair prices." Turkey's Prime Minister Binali Yıldırım also made striking remarks in which he underlined that security and diversification of energy supplies has undoubtedly become an issue of national security: "New actors are coming to the energy sector every day. The global energy community needs to address [this] transformation process accordingly."

The prime minister went on to say,"Countries should make sure that energy prices are not too high. Let's keep prices stable; this is a common expectation," noting that Turkey's economy is growing and becoming more dynamic: "Turkey's demand for energy is nearly three-times higher than the world average, second only to China in terms of increased accessibility to oil in the country."
RELATED TOPICS