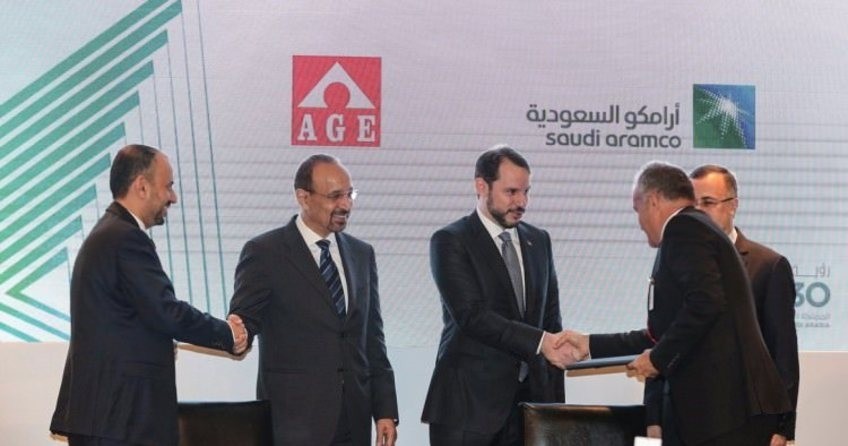 Saudi energy giant Aramco signed deals with 18 Turkish companies to enable them to bid in energy projects. Saudi Energy Minister Khalid al-Falih said the deals will generate a legal framework for many capital projects in the near future

Saudi Aramco has signed separate memorandums of understanding with 18 Turkish firms, enabling it to bid on projects and improving relations between the two countries, according to Energy and Natural Resources Minister Berat Albayrak.

Albayrak said the deals, set to be signed today, and a signature ceremony including the Turkish firms, will advance relations between Turkey and Saudi Arabia in the coming months. Recalling the friendship and fellowship between the countries, Albayrak pointed out that relations which have gained momentum since last year are moving forward to a better place. He noted that July 15 was a very important day for Turkish history and stressed that with its stronger and more unified economy in the aftermath, Turkey has started giving stronger responses to global and regional crises.

Highlighting that Turkey will continue its growth and investments, Energy Minister Albayrak stressed the country's three principles in the field of energy; namely, a project's contribution to both parties, to regional peace and stability, and lastly to the region and Europe in terms of energy supply security. Expressing his gratitude to Saudi Arabians on the occasion of the signature ceremony, Albayrak noted that as the fastest-growing country in energy after China, Turkey will continue to be a regional force with its trained and educated labor force, diversified and increasingly growing industry and regional dynamics.

Saudi Energy Minister Khalid al-Falih said these memorandums of understanding will generate a legal framework for many capital projects in the near future. Noting that he is pleased with Turkey's growth, Minister al-Falih urged stronger relations between the two countries and stated a desire to work with Turkish firms under the scope of Saudi Arabia's "Vision 2030". Suggesting that the agreements could be the first step to million-dollar investments in future projects, al-Falih said Turkey and Saudi Arabia are likely to do great things in other countries.

Saudi Aramco CEO Amin Nasser said the signed memorandums will help business opportunities between the two countries improve. Stressing that they are looking forward to working with Turkish firms, Nasser said that Saudi Aramco will continue its efforts to achieve "Saudi Vision 2030". He added that as Saudi Arabia aims to increase its locality rate in energy-related products and services by 2021, this is a great opportunity for Turkey.