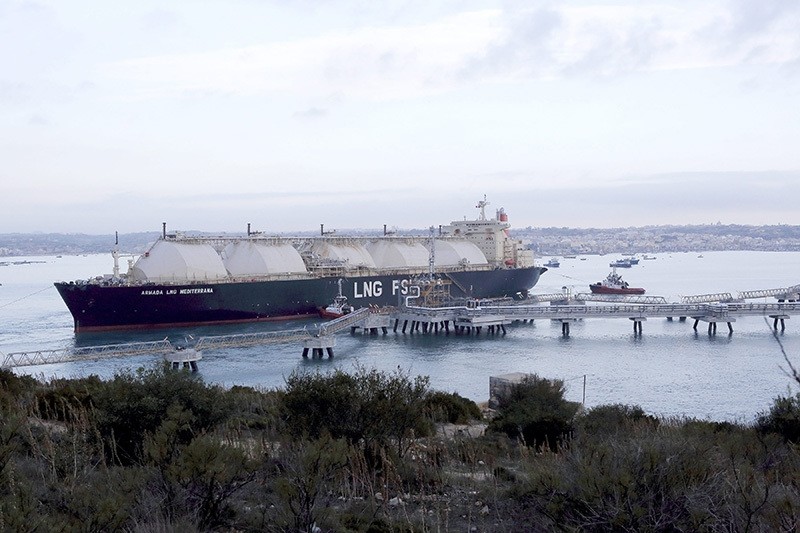 The Armada LNG Mediterrana floating storage tanker is moored by a jetty near the Delimara power station in Marsaxlokk Harbour, Delimara, Malta, Oct. 10 2016. (EPA Photo)
by Daily Sabah Oct 20, 2016 12:00 am

The floating liquefied natural gas (LNG) terminal off of the Yalova province coast in Turkey's Marmara region is expected to ease the energy supply for the region, which hosts over a quarter of the country's population and industry.

According to an article in Turkish business daily Dünya, a company named Maks Enerji has applied to the Energy Market Regulatory Board (EMRB) to obtain a license to operate a Floating Storage Regasification Unit (FRSU) that will be located on the southern shores of the Gulf of Izmit in the district of Altınova.

The environmental impact assessment report for the facility had previously been obtained for the site, which had been considered a shipyard but was later spared for the FRSU facility.

The LNG, transported to the site with tankers, will be transformed into gas and supplied to the natural gas distribution pipeline of the national pipeline company BOTAŞ located some 250 meters away from the facility.

The annual regasification and supply capacity of the facility is planned to be 6 billion cubic meters, of which 4 billion will be used by BOTAŞ and the rest by private companies.

Turkey currently buys natural gas from three countries through four pipelines. The FRSU facility, located in the Marmara region, which accounts for some 30 percent of Turkey's natural gas consumption, will help to reduce the deficient amount if there is a problem with the supply or distribution.

The amount that could be supplied by the facility is more than 10 percent of Turkey's annual natural gas consumption, currently standing at nearly 50 billion cubic meters. Half of this amount is used by natural gas combined with cycle power plants to produce electricity.

The facility will also allow large industries and natural gas combined with cycle power plants to supply cheaper gas from world markets. The facility is expected to cost between $550-600 million.