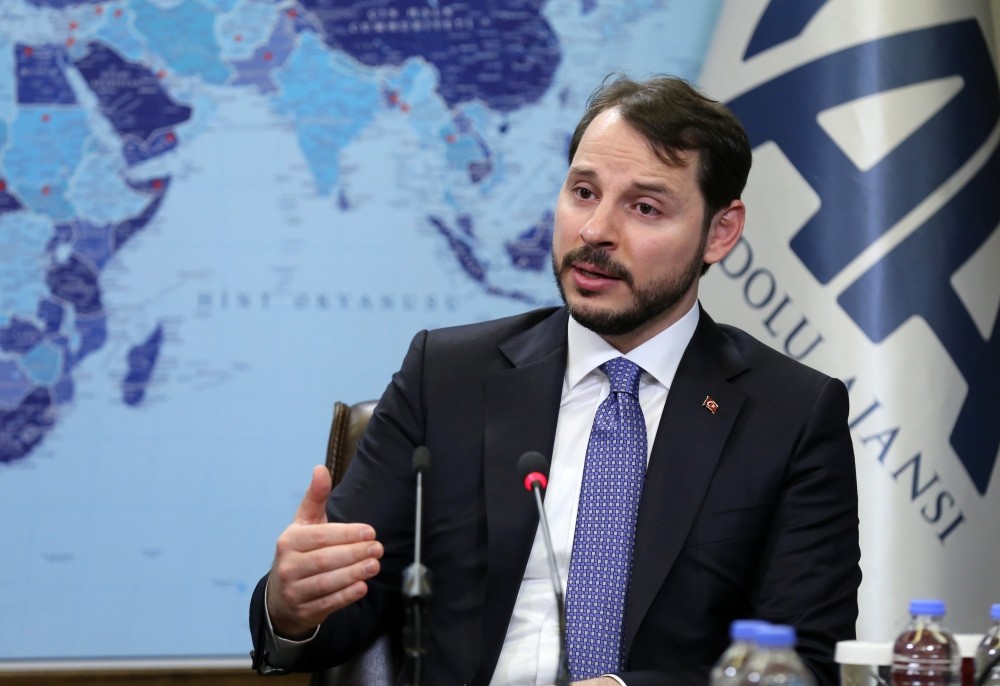 Recalling that East Mediterrinean natural gas has been on Turkey's agenda for a long while, Albayrak said they discussed this issue with the Israeli minister at the 23rd World Energy Congress. Turkey and Israel have agreed to establish a mutual energy dialogue, further strengthening ties between the countries following a six-year pause in relations, Israeli Energy and Water Resources Minister Yuval Steinitz said during the congress.

Turkey and Israel have agreed to establish a mutual energy dialogue, further strengthening ties between the countries following a six-year pause in relations, Israeli Energy and Water Resources Minister Yuval Steinitz said during the congress.

After attending the 23rd World Energy Congress in Istanbul, which marked the first ministerial-level visit since the raiding of a Turkish flotilla in international waters in 2010, Steinitz said that Turkey and Israel plan to enhance cooperation in the energy field. "Turkey and Israel will examine the feasibility of building a gas pipeline," he said.

Minister Steinitz noted that his meeting with Turkey's Energy and Natural Resources Minister Berat Albayrak marked an important moment in the normalization of relations between the two countries. "I am one of the greatest supporters for normalization of relations," the Israeli minister said. "This is a token of the normalization process that has just started between our two states, Turkey and Israel. I came here on behalf of the Israeli government and people. I am confident that most people are eager to see peace and stability in the region and good relations and economic cooperation between Turkey and Israel."

Steinitz stated that Israel has other options for energy but Turkey remains an important option. "Of course, we are considering also exporting natural gas to other countries like Jordan which we signed a contract with. Egypt, which also has a pipeline going through Cyprus to Greece will be considered, but the Turkish option is very significant," he said.

Israel is seeking ways to reach the European market, which is the biggest in terms of natural gas consumption. The idea seems to be in alignment with Europe's interest, since supply security and diversification of sources top their agenda. Israel can also export its natural gas to Europe via Cyprus and Egypt. However, this option requires establishing liquefied natural gas facilities at a high cost. Turkey, therefore, seems the most advantageous and safest route.

"We would like to consider exporting gas both to our neighboring countries, Jordan and Egypt, or to Europe through different pipelines,"Steinitz said, adding, "one of the very important options is connecting Europe through Turkey."

According to energy minister Berat Albayrak, Turkey does not foresee a delay to the schedule for the Turkish Stream natural gas pipeline project announced by Russian project partner Gazprom's chairman, who said the two lines would be ready by the end of 2019.

Speaking at Anadolu Agency's Editors' Desk in Ankara yesterday, Albayrak said that the Turkish Stream, whose intergovernmental agreement was signed on Oct.10 in Istanbul, would be a win-win project for Turkey.

Russia has announced two new pipeline projects for Europe in the last few years, the Turkish Stream and NordStream II, Albayrak explained. "Turkey sometimes has problems in receiving Russian gas via the Western line through Ukraine, and that is one of the reasons why Russia developed the infrastructure (for the Turkish Stream) and announced a project in accordance with its regional energy politics."

Albayrak stressed that the Turkish Stream would not only supply Turkey, but would serve Europe as the second line of the project is planned to transfer gas to the southern European markets. However, Europe needs to give a guarantee to Russia to benefit from the Turkish Stream, according to Russian Foreign Minister Sergey Lavrov.

The Turkish Stream project aims to transfer Russian natural gas to Europe via the Black Sea and Turkey. Under Russian state-owned energy giant Gazprom's plans, the Turkish Stream pipeline will be split into four lines with a total capacity of 63 billion cubic meters a year. In December 2014, Russia scrapped the South Stream pipeline project that would have transported natural gas to Europe via Bulgaria, and brought forward the proposed four-line project that will bypass Ukraine and stretch to the Turkish-Greek border through the Black Sea.

Speaking to European businessmen in Moscow on Tuesday, Lavrov was quoted as saying, "After the failure of South Stream, we will be ready to extend Turkish Stream to the territory of the European Union only after we received an unambiguous formal paper that guarantees the implementation of this project." According to sources, Lavrov stressed that, "In the foreseeable future it will be very difficult for EU countries to live without Russian energy resources."

Relations between Turkey and Russia froze when two Turkish F-16 fighter jets on an aerial patrol shot down a Russian warplane in late November 2015. After nine-months, the countries decided to reconcile and relations improved. Russian President Vladimir Putin visited Istanbul to participate in the World Energy Congress which was held between Oct. 9 and Oct. 13. "The process for the Turkish Stream slowed down due to the crisis on Nov. 24 between Russia and Turkey. But now everything is back on track," Albayrak said.

The minister hailed the importance of the project in having a positive effect on relations in the region and in eliminating potential gas supply delays or stoppages from the Western line via Ukraine. "There is a plan to start construction in 2017 and to complete by 2019. We don't foresee any delay for its completion," he noted.