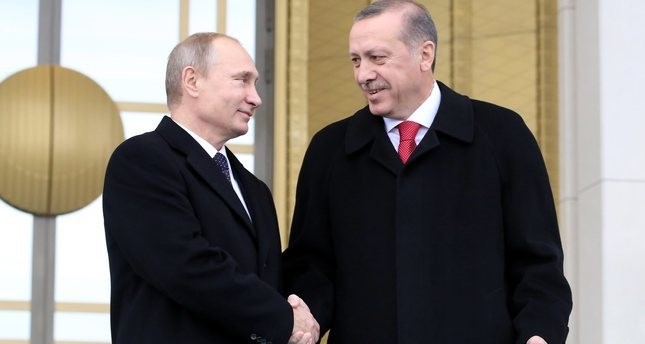 Russian President Vladimir Putin said in a meeting with Prime Minister Binali Yıldırım on Tuesday that Russia is grateful to President Recep Tayyip Erdoğan for the Turkish Stream agreement.

"We are grateful to President Erdoğan for signing the Turkish Stream agreement," he said.

On October 10, Turkey and Russia signed an inter-governmental agreement on realizing the construction of the planned Turkish Stream gas pipeline to pump Russian gas under Turkish waters in the Black Sea towards Europe.

The agreement was signed by Russian Energy Minister Alexander Novak and Turkish counterpart Berat Albayrak, in the presence of Russian President Vladimir Putin and President Recep Tayyip Erdoğan after their talks in Istanbul.

The agreement on the project entered into force through promulgation in the Turkish Official Gazette on Tuesday.

The General Assembly of the Turkish Parliament ratified the bill for the TurkStream agreement on Dec. 2 and it was consequently approved by President Recep Tayyip Erdogan.

PM Yıldırım paid an official two-day visit to Russia upon the invitation of his Russian counterpart Dmitry Medvedev, where he met with Putin and the chairwoman of the Council of the Federation, Valentina Matviyenko, before speaking at a scheduled conference at the Moscow State Institute of International Relations (MGIMO). The prime ministerial visit to Moscow from Dec. 5-7 will focus on key items on the agenda, including the economy, reducing the price of natural gas exports to Turkey, the TurkStream gas project, lifting the ban on the imports of certain agricultural goods, visa-free travel and the use of local currency in trade between the two countries.