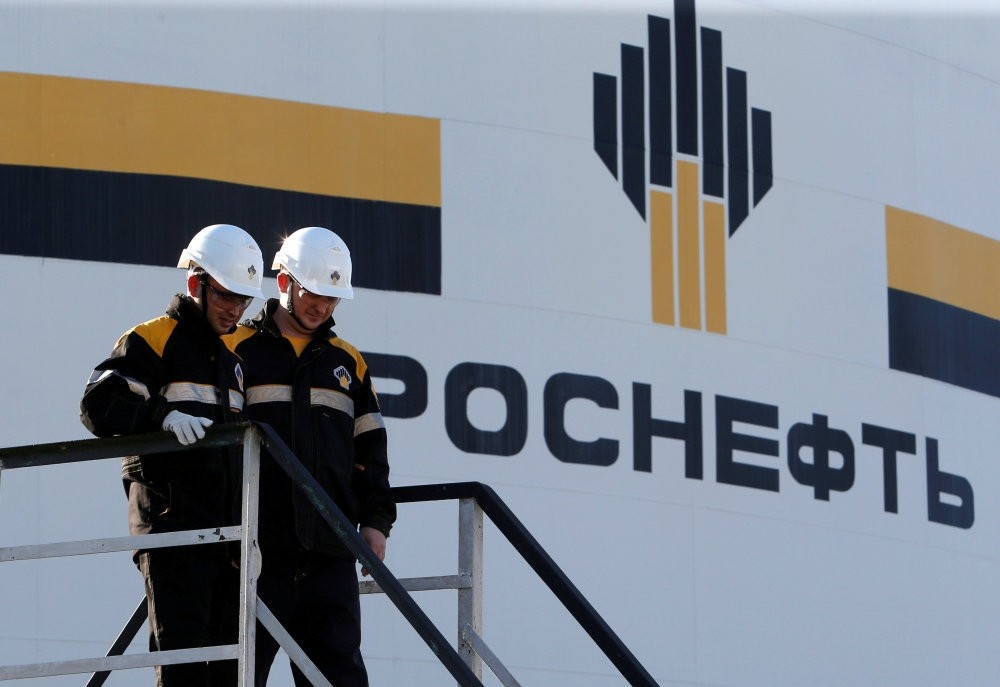 Workers stand next to a logo of Russiau2019s Rosneft oil company in Nefteyugansk.
by Dec 09, 2016 12:00 am
Shares in Russian oil giant Rosneft lept yesterday after the Kremlin announced the 10.5 billion euro ($11.3 billion) sale of a stake to commodities trader Glencore and Qatar's sovereign fund.

Russia n President Vladimir Putin late Wednesday hailed the surprise deal for 19.5 percent of the state-controlled firm as the largest in the global energy sector for 2016, a major fillip for the strongman leader as he seeks to plug the country's growing deficit.

The sell-off is part of a broader privatization drive and comes despite Moscow being mired in Western sanctions over the crisis in Ukraine that have played a major part in plunging the country into recession.

Swiss-based Glencore and the sovereign fund of gas-rich emirate Qatar will go fifty-fifty on the deal, which leaves the Russian state controlling just over 50 percent of the country's largest oil firm.

The sale of the stake in Rosneft was long in the pipeline but up until the last minute most observers expected the company itself to buy the shares from the government.

Rosneft chief Igor Sechin told Putin on Wednesday the firm had taken part in talks with "more than 30 companies, funds, professional investors, sovereign funds, financial institutions from countries in Europe, the Americas, the Middle East and the Asia-Pacific region" ahead of the deal. The final agreement is being partly funded by a cash from "one of the major European banks", he said, without naming the lender.

Investment bank Renaissance Capital said in a note that it was an Italian bank financing the lion's share of the purchase by Glencore.

A statement from Glencore said that the deal "will be conditional on the subsequent finalization of all relevant financing, guarantee and other agreements," and could be closed in mid-December. Sechin pointedly thanked Putin at the Kremlin meeting and said that the deal was only made possible thanks to his "personal input." Kremlin spokesman Dmitry Peskov insisted the sale was strictly business and said it showed Russian companies remained attractive for overseas investors despite the poor economic climate. "This deal is exclusively commercial," he said. "Russian assets, especially leading assets, are of considerable interest to investors both at home at abroad."

The sale comes after oil prices have risen to more than $50 a barrel after OPEC members last week hammered out a deal to cut oil output for the first time in eight years. Once a little-known firm, Russia's Rosneft has enjoyed a meteoric rise under Putin.

Headed by the ex-KGB agent's powerful ally Sechin, it has scooped up some of the most prized assets in the Russian oil sector in a series of controversial deals.

Moscow - which is not a member of OPEC - has said it is ready to reduce crude output by 300,000 barrels a day in the first half of next year.

OPEC and non-OPEC members are set to meet in Vienna on Saturday to discuss the implementation of the deal to slash output.

Experts predict that if oil prices remain higher than expected, the Russian government will use the opportunity to increase spending ahead of presidential elections in 2018 instead of reducing its deficit.
RELATED TOPICS