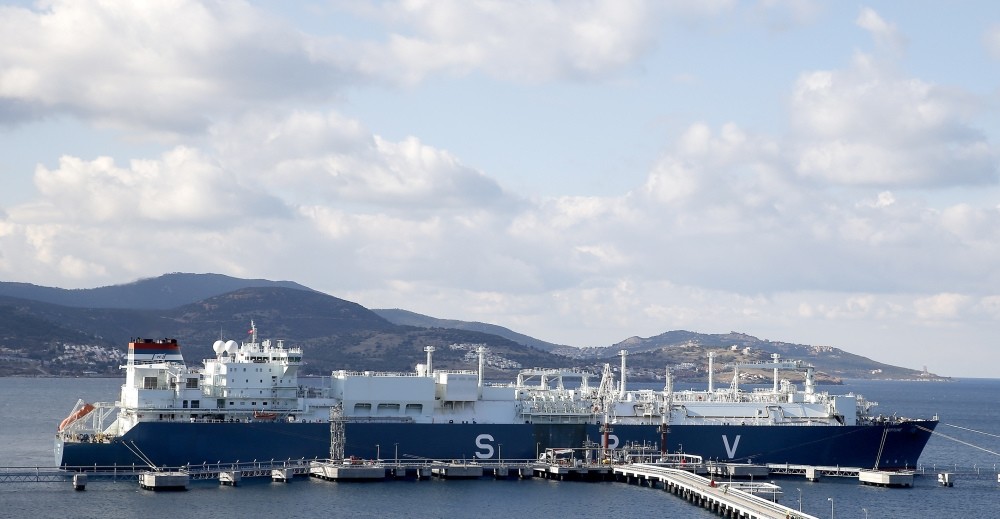 GDF Suez Neptune floating terminal, the first FSRU of Turkey, has arrived in Izmir.
by Daily Sabah with Wires Dec 15, 2016 12:00 am

Expected to contribute more than 5 billion cubic meters (CBM) of natural gas to Turkey's annual gas supply, the GDF Suez Neptune plant, Turkey's first Floating liquefied natural gas (LNG) Storage Regasification Unit (FRSU), has started conducting test studies inİzmir's Aliağa district. In a period of only six months unit will be able to transfer the capacity, which is usually activated in four years, to Turkey's national gas supply. This is possible since it operates from the water.

The LNG regasification project, conducted by Etki Liman İşletmeleri Doğal Gaz İthalat ve Ticaret AŞ (Etki Port Operations Natural Gas Import and Trade Inc.) and founded by Kolin Group and 50 percent owned by Kalyon Group, has reached its final stage. According to information received from the senior executives of Etki Liman İşletmeleri AŞ by the Anadolu Agency, the floating LNG Storage and Regasification Unit GDF Suez Neptune, which can provide a prompt solution to Turkey's energy supply crisis, is anchored at the private pier built on the coast alongside Çakmaklı Street in İzmir's Aliaga district.

The Norwegian-flagged 2009-built, 283-meter-long, 43-meter-wide floating unit will be able to transfer LNG from different vessels to the national system in addition to the gas supply at -163 degrees Celsius it contains.A storage capacity of 5.3B CBMIncluded among the entry terminals of the natural gas imported by Turkey, the floating vessel will have a storage capacity of 145,000 CBM of liquid natural gas and can supply over 5.3 billion CBM of gas annually to the national system.

With a capacity of more than 10 percent of Turkey's annual demand of about 40 billion CBM of gas, the unit is continuing its test studies in the process of converting liquefied gas into natural gas. If the unit completes the testing process, it is expected to start providing natural gas to the system by the end of next week.

It has been reported that the demand for floating terminals has rapidly increased in the world due to the advantages of fast mobilization, resource diversity, and supply security, and GDF Suez Neptune was one of about 20 floating units in the world. It was also noted that the vessel's capacity, which would be activated in four years if it were a fixed facility, can be transferred to the national system within only a total of six months thanks to the floating unit. Operated by a long-term leasing method, the power plant was established in Aliağa due to its high natural gas supply, but it can be taken to different regions of Turkey in the case of new pier investments.

The floating LNG terminal project, which was brought to fruition by Energy and Natural Resources Minister Berat Albayrak to ensure supply security and resource diversity in the natural gas area in Turkey in the short-term, will be put into active use at a ceremony that President Recep Tayyip Erdoğan and Prime Minister Binali Yıldırım will attend in Aliağa on Dec. 23.

FSRU in Marmara on the agenda

A floating natural gas terminal with an annual capacity of 6 billion CBM is planned to be established in Marmara. It was previously reported in the Dünya daily that Maks Energy has applied to the Energy Market Regulatory Authority (EMRA) in order to obtain a license to operate a FSRU that will be located in the Gulf of İzmit in the Altınova district. The fact that the unit will be located in Marmara region, which consumes 30 percent of Turkey's gas supply, is important.The environmental impact assessment study for this location has already been obtained, as it was previously considered for the construction of a shipyard, but it was later decided that it should host a floating liquefied natural gas (LNG) terminal. The LNG supplied by tankers will be regasified and supplied to the gas distribution network of state-owned company Petroleum Pipeline Corporation (BOTAŞ). The capacity of this floating terminal would be 6 billion CBM of gas per year, of which some 4 billion would be used by BOTAŞ and the rest by various private companies. The project is expected to cost between $550-600 million.
RELATED TOPICS