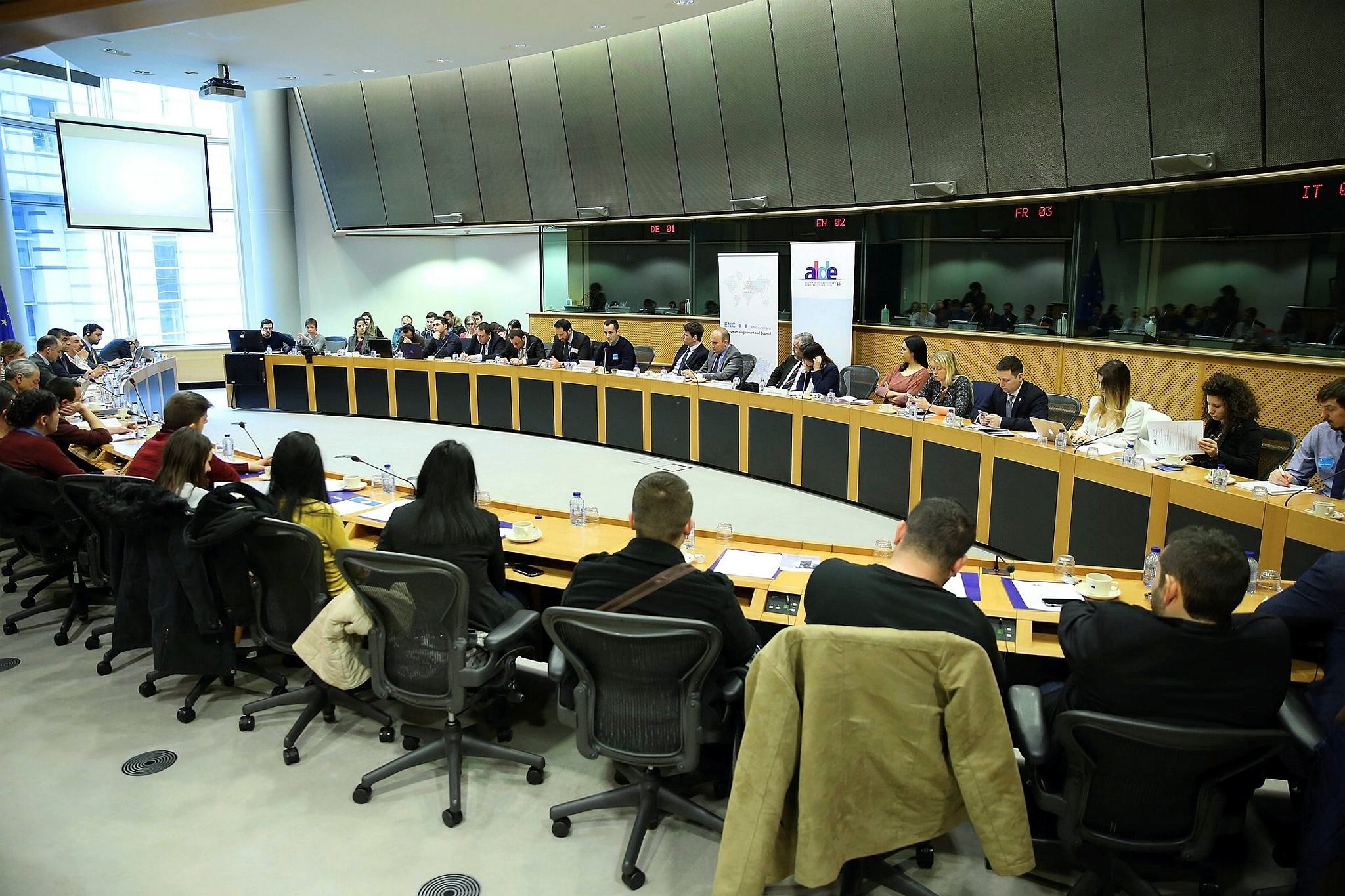 |AA Photo
by Mehmet Solmaz Jan 24, 2017 12:00 am
A roundtable discussion titled "Cyprus and energy - an exchange of views," held at the European Parliament in Brussels brought experts, diplomats and politicians together to debate the Cyprus reunification efforts and how a trillion cubic meters of natural gas discovered around the island could aid a permanent peaceful solution for the island.

The discussion started with opening remarks by Ilhan Kyuchyuk, a Bulgarian-Turkish Member of the European Parliament for the Group of the Alliance of Liberal and Democrats for Europe (ALDE). He expressed his optimism over the ongoing Cyprus reunification talks.

Ozan Serdaroğlu, an associate fellow at the Institute for Security and Development Policy, later talked about the possible scenarios related to the fate of the peace talks and discovery of energy resources around the island and the region.

Angelos Giannakopoulos, an adjunct professor at Dortmund University and a Heinrich-Heine visiting professor of European Studies at the University of Tel Aviv, stated that energy discovered in Cyprus could be tapped in only by solving the political and social problems the island faces first.

Professor Giannakopoulos said that although the natural gas potentials of both Cyprus and Israel could strengthen their relations with neighboring countries, the ongoing 40-year Cyprus conflict has held back these collaborations from moving forward.

Given that Israel seeks more cost-effective ways to export its gas in the Leviathan field and Tamar gas fields to Europe, the country is considering building a pipeline through Turkey in order to reach the European market.

Giannakopoulos also stressed that Turkey was a key power in the region's energy sector and that no peace solution in the island was possible without Turkey's participation. He said he was sure that energy would have an important impact on relations between the countries in the eastern Mediterranean and as long as the Cyprus issue was not solved, there would always be a crisis there. Additionally, he said that a peace settlement will also reduce security threats.

Meanwhile, also included within the Mediterranean gas reserve, Israel's Leviathan gas field was reported to contain some 500 billion cubic meters of gas, according to the U.S. Energy Information Administration. Furthermore, last year, Italian oil and gas giant Eni reported the discovery of an estimated 30 trillion cubic feet of natural gas in the Zohr field off the shore of Egypt. This enormous amount of gas constitutes an important source of natural gas supply and export in the eastern Mediterranean.

Although energy is seen as a crucial tool to boost peace efforts, both sides of Cyprus are still having troubles on solving key issues, like the presence of Turkish troops on the island. The Turkish Cypriot Economy Minister Sunat Atun has recently stated that the continued status of Turkey as a "guarantor power" is a red line for Turkish Cyprus.

"The presence of Turkish troops, political equality, equal representation of our rights in the parliament and equality in our constitutional rights is our red line," Atun said, echoing Turkish Cypriot President Mustafa Akıncı's repeated comments that Turkey's role as a guarantor would have to be part of any successful agreement, to resolve the division between the Turkish and Greek Cypriots.

The final stages of the U.N.-brokered talks between the two communities in Geneva which were also attended by the foreign ministers of three guarantor powers Turkey, Greece, and Britain - ended in a failure after a disagreement on new borders and the presence of Turkish troops on the island.

The guarantors were assigned when Cyprus gained independence from the U.K. in 1960. As one of the powers, Turkey intervened in 1974 in response to an attempt by Greek Cypriot militants to unify the island with Greece. Ankara keeps around 30,000 troops stationed on the island.

Hayriye Kahveci, an assistant professor at the Middle East Technical University in Northern Cyprus, said that Greek Cypriots put forward the names of three energy companies at the Geneva talks and demanded one of these companies be handed the right to carry out energy drills in and around the island. Kahveci urged that all sides should display sincerity and should avoid causing any trouble for the talks that came very close to a solution.