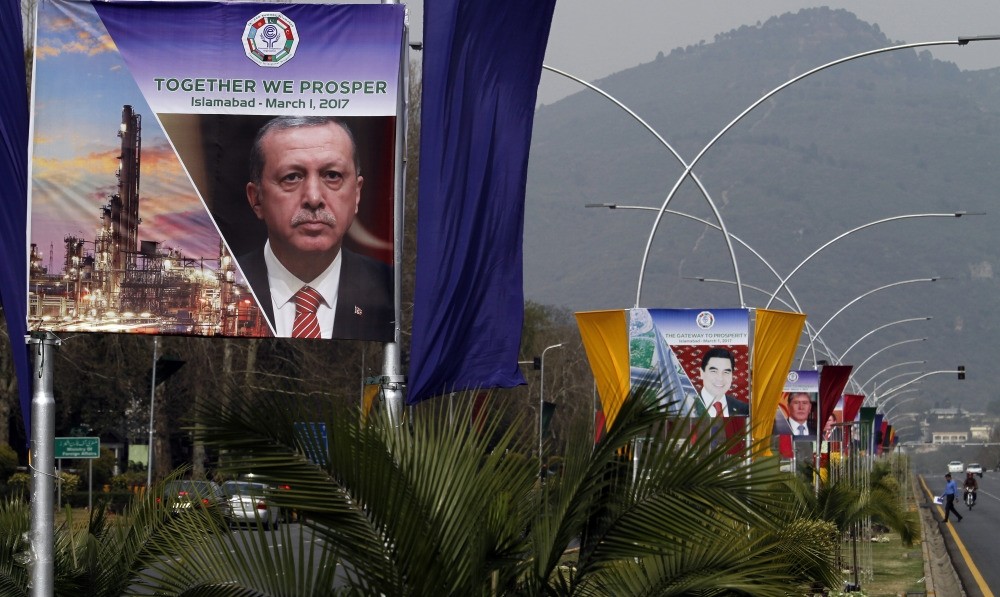 Billboards splashed with images of the presidents of Turkey, Turkmenistan and Kyrgyzstan on display at a main highway to welcome the leaders in Islamabad, Pakistan Tuesday.
by Anadolu Agency Mar 01, 2017 12:00 am
Member countries of the Economic Cooperation Organization (ECO) are rich in energy resources and Turkey is ready to transfer those resources to international markets, the country's foreign minister said yesterday.

Speaking at the ECO Foreign Ministers meeting in Islamabad, Pakistan, Mevlüt Çavuşoğlu said that energy is a key field upon which the organization must focus on.

"Our region is rich in energy resources. Turkey is ready to transfer [these resources] to international markets," the foreign minister noted.

Çavuşoğlu emphasized that the 13th ECO Summit is being held at a crucial time.

"Current political and economic challenges force us to reconsider the role of the ECO," he said.

According to the Turkish foreign minister, the organization has huge potential to become an important player in the region. On the other hand, he said that member countries needed to redouble their efforts to maximize this potential.

"First of all, we need to put into force the Economic Cooperation Organization Trade Agreement (ECOTA) to enhance interregional trade. With this understanding, I call upon all member states to fulfill the necessary requirements for participating in the ECOTA," the minister said.

Commenting on the organization's "Ecobank," a financing body for trade projects, Çavuşoğlu said, "We need to enhance the institutional and financing capacity of Ecobank to meet the growing needs of the region."

"The effective implementation of the Transit Transport Framework Agreement (TTFA) and completion of outstanding projects, such as the Islamabad-Tehran-Istanbul Road Corridor, should be the organization's priorities," Çavuşoğlu said, stressing the importance of the integration of regional transport systems and the effective use of transit corridors.

"We can utilize [these qualities]. As a leading country in the field of tourism, Turkey is ready to share our experiences with our fellow ECO members," he asserted.

Çavuşoğlu asked ECO members to fulfill their responsibilities in the scope of the organization's budget.

"Unfortunately, current budgetary problems prevent us from transforming the ECO into a more efficient organization. We believe that all member countries should fulfill their responsibility in terms of burden-sharing. This is also important for strengthening the ownership of our organization," he said.

"Since our resources are limited, our efforts in the ECO should be more focused, realistic and resource-efficient. We should define and concentrate on prioritized areas such as trade and investment," he added.

At the same meeting, Iranian Foreign Minister Javad Zarif said the ECO should invest more time and energy into the implementation of the organization's vision for 2025.

"The members want to see the organization focus on projects and programs which bring about maximum economic benefits to members and the region as a whole," Zarif said, adding that the ECO would play a greater role in future.

Meanwhile, the head of Pakistan's Foreign Affairs Ministry Sartaj Aziz said that a lack of regional connectivity is a major hindrance to economic cooperation. Aziz stated that joint efforts are needed to transform the ECO into a formidable economic bloc through full implementation of its resources.

The ECO was founded by Turkey, Iran and Pakistan in 1985. In 1992, the organization expanded to include seven new members including Afghanistan, Azerbaijan, Kazakhstan, Kyrgyzstan, Tajikistan, Turkmenistan and Uzbekistan.

The foreign ministers from the member states are expected to approve an Islamabad Declaration which aims to build more cooperation in connectivity, trade, transportation and energy.

The ECO Vision 2025 will be drawn up at a summit being held today. President Recep Tayyip Erdoğan is expected to attend.
RELATED TOPICS