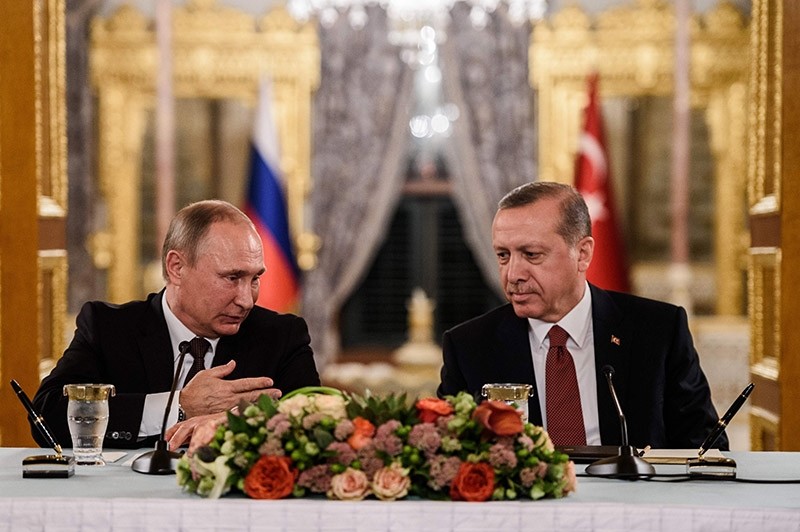 President Recep Tayyip Erdoğan will pay a visit to Russia on March 10 to attend a high-level meeting with Vladimir Putin where the TurkStream natural gas pipeline project and Akkuyu Nuclear Power Plant will be discussed, according to a statement released by the Kremlin on Tuesday.

During the meeting, bilateral relations between Ankara and Moscow are expected to be discussed "extensively," the statement said.

The High-Level Cooperation Council (HLCC) is usually headed by President Erdoğan and his Russian counterpart Putin and includes government ministers from both states.

The statement added that the leaders will exchange views on regional and international issues, particularly Syria.

"Several agreements will also be signed during the visit, which is expected to contribute to the development of Turkish-Russian relations," it said.

The last Erdoğan-Putin meeting was held last August after Turkey and Russia patched up the fallout from the November 2015 downing of a Russian jet over the Turkey-Syria border.

Since the summer, Russia has relaxed the sanctions imposed on Turkey in response to the jet incident and the countries have worked together to bring a cease-fire and political solution to the conflict in Syria.

A cease-fire agreement in Syria had been reached under guarantees from Russia and Turkey in December.

Energy and Natural Resources Minister Berat Albayrak paid a visit to the construction field of the Akkuyu Nuclear Power Plant, which will be the first nuclear energy plant in Turkey, announcing that the plant would be operational by 2023.

"We plan to take Akkuyu into service in 2023," Minister Albayrak said in the beginning of February.

Examining the field, Albayrak underlined that the plant will have the highest of international security standards and will use 3+ technology.

The nuclear plant in the southern province of Mersin is the first of three nuclear power plants Turkey currently plans to build to reduce its dependence on imported energy from exporters.

Turkey launched the construction of its first nuclear power plant in negotiations with Russia in 2010 for greater energy independence. The $20 billion project will consist of four units, each of which will be capable of generating 1,200 megawatts of electricity.

Rosatom is constructing the Akkuyu power plant and it is expected that the facility will produce approximately 35 billion kilowatt-hours of electricity per year once completed. Its service life is estimated to last 60 years. The Akkuyu power plant is forecast to begin operating in 2023 at the latest.

Turkey and Russia signed an inter-governmental agreement on realizing the construction of the planned Turkish Stream gas pipeline to pump Russian gas under Turkish waters in the Black Sea toward Europe in October at the World Energy Congress.

The agreement was signed by Turkish Energy Minister Berat Albayrak and his Russian counterpart Alexander Novak, in the presence of Russian President Vladimir Putin and President Recep Tayyip Erdoğan after their talks in Istanbul.

Parliament ratified the deal on Dec. 2, 2016 and President Recep Tayyip Erdoğan approved the agreement on Dec. 5, 2016.

The project was announced by Putin during a December 2014 visit to Turkey and is estimated to cost around 11.4 billion euros. It will carry gas from Russia under the Black Sea to Turkish Thrace. One line, with a 15.75 billion cubic meter capacity, is expected to supply the Turkish market with a second line carrying gas to Europe.