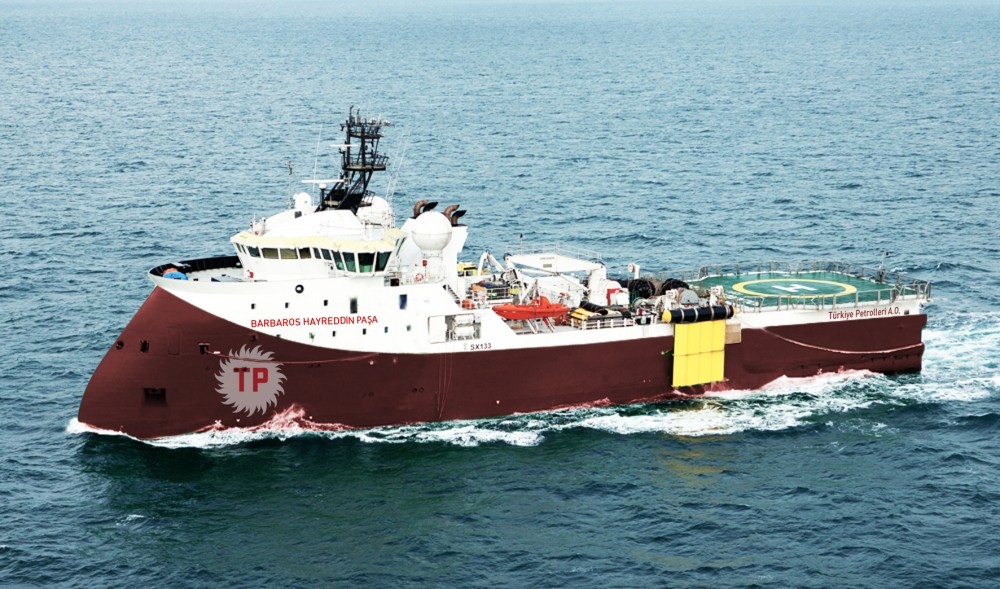 Turkish seismic vessel Barbaros Hayrettin Pau015fa carried out drilling operations both in the Mediterranean and Black Sea.
by Daily Sabah with AA Mar 11, 2017 12:00 am

Besides significant changes in energy, investments and recently accelerated steps regarding oil and gas exploration, Turkey should assume a more active role both in diversifying its own natural gas and in gas coming from Iraq and the Eastern Mediterranean in order to become a major energy player in the region

Turkey's recent initiatives and projects under the auspices of diversifying energy supply and expanding storage capacity are expected to contribute to the security of the country's energy supply. In addition to securing domestic demand, Turkey emerges as an important country for shipping oil and natural gas through pipelines. In that regard, while ambitious to become a strategic energy hub in its region, Turkey preserves its strategic importance on the energy routes. The countries in Turkey's surrounding region have profound natural gas resources and Turkey should benefit from these resources as much as possible, according to International Energy Agency (IEA) Executive Director Fatih Birol who spoke at the IHS CERA Week 2017 Energy Conference.

Birol also added, "Turkey has to diversify its own natural gas and it needs to play an important role in the distribution of gas coming from Iraq and the Eastern Mediterranean."

Birol said that most of the natural gas Turkey purchases is procured from a single country, indicating that the major dependence on a single source should be diversified.

Pointing out that there are substantial natural gas resources in Turkey's surrounding region, Birol said, "We should benefit from these resources as much as possible. Apart from Azerbaijan, from which we currently buy natural gas, there are two new gas producers. Turkey has to play an important role both in diversifying its own natural gas and in gas coming from Iraq and the Eastern Mediterranean. "

Noting the importance of abundant and cheap natural gas and oil resources in Iraq, Birol said Iraq is going through an unstable period at the moment but that after the difficulties are overcome, the country will enter the "golden age."

Moreover, explaining that there are substantial natural gas resources in the Eastern Mediterranean region, Birol said that sending natural gas produced in Israel and around Cyprus to Europe via Turkey is the most economically efficient option.

Emphasizing that natural gas is a very environment-friendly energy source, Birol said, "We use natural gas both in heating and electricity generation in our country, I think natural gas will play an important role in Turkey."

'We will not put all the eggs in one basket'

Indicating that Turkey will be able to diversify its resources by importing liquefied natural gas from countries in Africa and Asia, Birol said, "They will not put all the eggs in one basket."

He also said Turkey has made major strides in recent years on natural gas and oil security issues, indicating that the natural gas storage facility in Lake Tuz is an extremely important step taken in terms of natural gas supply security.

Pointing out that natural gas has entered the "golden era," Birol added that the production of natural gas in the world, especially in the U.S. and Australia, will increase to a great extent and this will be effective in the decrease of gas prices.

'Turkey should assume a more active role in Mediterranean'

Speaking at the international "Oil and Gas: Road Map Forum" organized in Lebanon, Boğaziçi University Energy Policy Application and Research Center Director and Professor Gürkan Kumbaroğlu said there was a serious mobility in energy fields in the Eastern Mediterranean in recent months, adding that the process should be monitored closely.

He also said an active policy could contribute to the negotiation between the Turkish Republic of Northern Cyprus and the Greek populated southern part of Cyprus because the Turkish-Greek border is also very important for the transportation of all gas resources to Europe. "With a very proactive bilateral and proactive political and energy diplomacy, Turkey is coming forth as a new emerging force," Kumbaroğlu added.

Stating that the Eastern Mediterranean has emerged as a "very important source of supply" especially in natural gas and that this is important for Turkey, Kumbaroğlu said:" In the coming years, gas demand is expected to increase globally. Agreements have been reached on the passage of Russian and Khazarian natural gas through Turkey, and these projects will be carried out in the coming years. Now, in addition to these, an Eastern Mediterranean potential emerges. Hopefully, the gas will come from Iraq too. Therefore, the projects that contribute to the geopolitical importance of Turkey and which will lead to the transformation into a commercial center in the natural gas field, are being realized one by one."