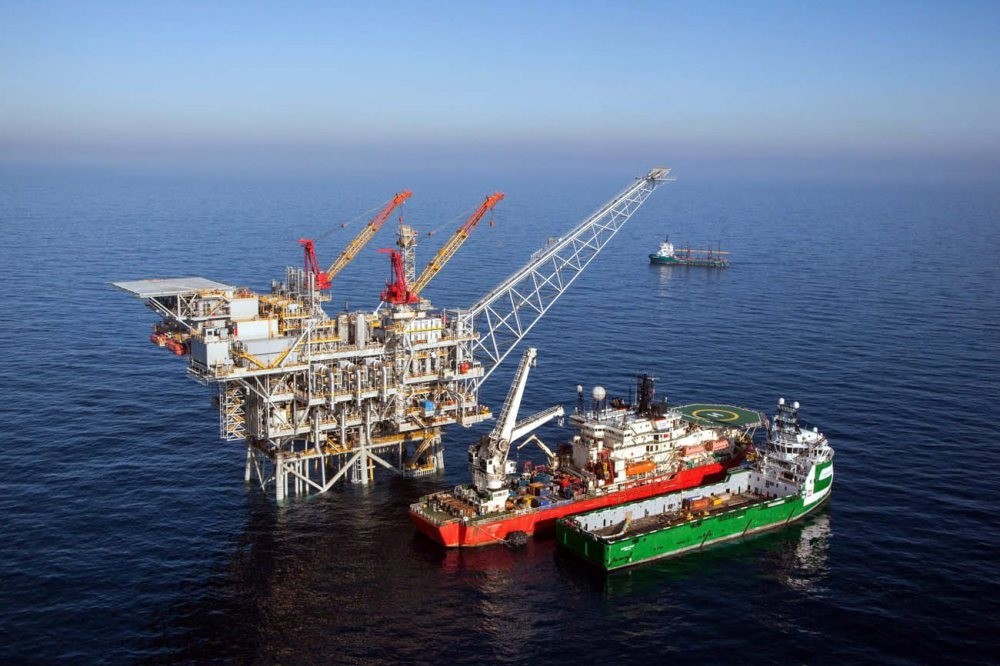 An aeriel view of the Tamar gas field disocevered by Israel about 90 km off the Israeli coast. According to estimates there are more than 200 billion cubic meters of natural gas at the field.
by Elif Binici Erşen Mar 15, 2017 12:00 am

The copious amount of natural gas in the Mediterranean where Turkey will focus its exploration and seismic survey operations, has created demand among nations and companies involved in the region

The recent discoveries in the Mediterranean, particularly in the Levantine Basin, have drawn the interest of many European, Middle Eastern and U.S. companies that wish to benefit from the vast natural gas resources in the region. As Turkey also intends to re-launch its exploration activities in the area, the number of parties in the region is further increasing. The only way to exploit the abundant natural gas reserves for these players therefore requires multinational cooperation, according to analysts, as the countries involved depend heavily on one another for the exploration, production and shipment of reserves.

So far, Turkey has been designated as the energy hub of the region; through its pipelines it will transfer gas extracted from the region to Europe. Now, Turkey has also expressed its intention to become a player in the upstream (exploration and production) business carried out in the region. 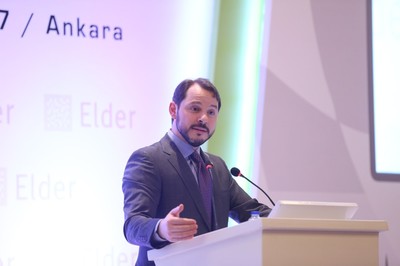 At last week's IHS CERAWeek in Houston, Energy Minister Berat Albayrak announced that Turkey is planning to conduct deep-sea drilling and seismic exploration of oil and natural gas resources in the Mediterranean and Black Sea. Albayrak also reiterated Turkey's plans on Tuesday, announcing that Turkish Petroleum will launch operations at the end of March with two vessels. Albayrak particularly emphasized that the Mediterranean will secure a place in the global exploration arena as an important part of Turkey's strategy in the region.

In addition to regional operations to explore and conduct seismic surveying, Turkey is also at the center of talks and projects for pipelines that would carry Mediterranean gas, particularly from the reserve-rich Levantine Basin to Europe, through Turkey. It might, therefore, partake in multinational consortium-like partnerships with others operating in the region.

Although a statement with regard to where Turkey may conduct exploration and seismic surveying has not yet been made, Prof. Gürkan Kumbaroğlu, director of the Energy Policy Research Center at Boğaziçi University, opined that the country should not restrict itself to its own sovereign territorial waters. Turkey should also cooperate with other countries in the region while conducting operations in the territorial waters of those countries, as well as maintaining partnerships with the multinational conglomerates in making use of the ample gas reserves in the Mediterranean, the professor noted.

If Turkey engages in exploration in these areas, a consortium of companies that already operate in the region, as well as European companies, could all benefit.

Professor Kumbaroğlu highlighted the necessity of Turkey taking the stage as an active player, as Europe has long been in the field, referring to discoveries by Italians in Egypt and the French interest in Lebanon.

Furthermore, carrying natural gas through pipelines that could be built on the shortest route to the destination means going through Turkey when it comes to Mediterranean gas. Israel has long searched for the most lucrative way to export its gas to Europe and reports have proved that a pipeline that would pass through Turkey is the least expensive option, since either a pipeline through Greece or liquefaction, regasification and carrying through a floating LNG terminal would have higher costs.

"If natural gas reserves could be delivered in barrels as in the case of oil, the Mediterranean would be a blood bath. But the construction of pipelines demands multinational cooperation. This requirement for collaboration would definitely contribute to regional peace," Kumbaroğlu added.

He also emphasized that pipelines that transfer Mediterranean gas to Europe will pass through Turkey, as any other option is costly and time-consuming to a significant extent. Turkey thus emerges as a logical choice for an energy hub in the region, enabling an environment where gas from different origins can compete with one another and a reference price can be set.

Kumbaroğlu further underscored that the Mediterranean is getting warmer and new reserves are being discovered, which will continue. Shipping Israeli gas to Europe will be a pioneering and exemplary project for the Mediterranean. Recalling that in 2013 Russia and the Syrian regime signed a deal that allows the country's state run Soyuzneftegaz to explore and drill in the Syrian coastal area, any seismic survey on the Syrian side of the Levantine could call for collaboration with Russia, as well, said Kumbaroğlu.

With regards to multinational collaboration, Professor Erdal Tanas Karagöl, energy director at the Foundation for Political, Economic, and Social Research (SETA), stated that Turkey's presence in the region is possible with the international agreements to be concluded with international firms. If an agreement is sustained, Turkey can produce its own energy from the regional reserves and use it in the domestic market, Karagöl added. But any export depends on the capacity of the reserves Turkey may discover in the region, according to Karagöl.

Like Kumbaroğlu, Karagöl underscored that Turkey and Russia could work in cooperation in the Mediterranean in line with the agreements, drawing attention to other foreign operations of Turkish Petroleum in Azerbaijan, Iraq and Russia. In fact, Karagöl states that, Turkey's collaboration with Russia is possible since Turkey is a market Russia would not want to lose.

Salihe Kaya, an energy researcher at SETA, also drew attention to the strong possibility of partnership among nations that are operating in the Mediterranean. The launch of Turkey's upstream activities in the region would encourage other investors, she noted.

Recalling that Turkey-Russia ties, which were strained after November 2015 when Turkey downed a Russian jet that was violating its airspace, garnered momentum through energy collaboration for projects such as the TurkStream natural gas pipeline and Akkuyu nuclear power plant, Kaya emphasized that Turkey-Israel ties could also further improve through energy collaborations in the region.

She further noted that the visit of Israeli Energy Minister Yuval Steinitz in April could trigger stronger collaboration between the two states. A pipeline that could transfer Israel's gas reserves in the Mediterranean to Europe through Turkey could be announced during this visit, which will contribute to the amelioration of relations.

Recent gas discoveries in the Mediterranean 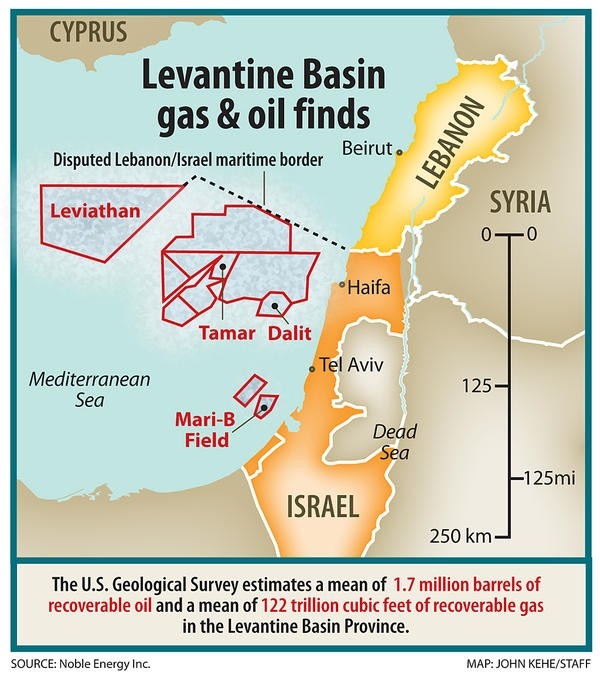 In 2010, the United States Geological Survey (USGS) estimated that there could be up to an additional 122 trillion cubic feet (3.45 trillion cubic meters) of undiscovered natural gas resources in the Levantine Basin, which encompasses a large portion of the eastern Mediterranean Sea (see map). The USGS report also indicated that there could be up to 1.7 billion barrels of recoverable oil in the Levant Basin, hinting at future possible oil discoveries.

Cyprus and Egypt have also found new gas deposits in the Mediterranean. U.S. firm Noble Energy discovered the Aphrodite Field in Cypriot waters in late 2011. This field is located at the 12th exploratory drilling block in the maritime Exclusive Economic Zone and is estimated to hold about 200 billion cubic meters (bcm) of gas. The massive Zohr Field was found in Egyptian waters by Italian firm Eni in 2015. Eni reported the discovery of an estimated 30 trillion cubic feet of natural gas in the Zohr field off the coast of Egypt.

Although Lebanon has not announced recoverable gas reserves, geologic data indicates that there is the potential for Lebanon to possess significant gas resources, as the USGS report reveals.

Included within the Mediterranean gas reserve, Israel's Leviathan gas field is reported to contain some 500 billion cubic meters of gas, according to the U.S. Energy Information Administration (EIA). This enormous amount of gas constitutes an important source for natural gas supply and export in the eastern Mediterranean.

Turkey's annual natural gas consumption in 2016 stood at 45.6 bcm of gas, recording a 4 percent decrease from the previous year, which was more than 46 bcm. The country's gas production in 2015 was recorded at 399 million bcm according to a report by Turkish Petroleum.

Two years ago, Turkey's premier exploration vessel, the Barbaros Hayrettin Paşa, conducted oil and natural gas explorations off the coast of Cyprus, but its activities were interrupted in March 2015 when tensions arose between the Greek Cypriot administration and the Turkish Cypriot government regarding sovereign ownership of the resources. But Turkey is determined to re-launch its survey with another vessel named Turkuaz, owned by the General Directorate of Mineral Research and Exploration.

The Greek Cypriot administration previously initiated a tender process for exploration activities in the contested natural gas fields including blocks 6, 8, and 10, to the ire of Turkish foreign affairs authorities, which assert that a considerable portion of block 6 is located beneath the Turkish continental shelf. Greek Cypriot President Nicos Anastasiades claimed that the tender issue and the use of the resources in these oil fields is a matter of sovereignty for the Greek Cypriot administration.The Greek Cypriot partnership with foreign companies such as Italian energy giant Eni, which allowed these companies to carry out seismic exploration, caused tensions to flare up between Turkish and Greek administrations and negatively affected peace talks on both sides. The Turkish Republic of Northern Cyprus has since stated that the island's resources belong to both communities.

Due to the dispute over Cyprus's maritime Exclusive Economic Zone, established with the 1982 United Nations Convention on the Law of Sea and covering 13 exploratory drilling blocks, the exploitation and export of the gas discovered in this area has not been allowed for use or trade.
Last Update: Mar 15, 2017 2:23 pm
RELATED TOPICS