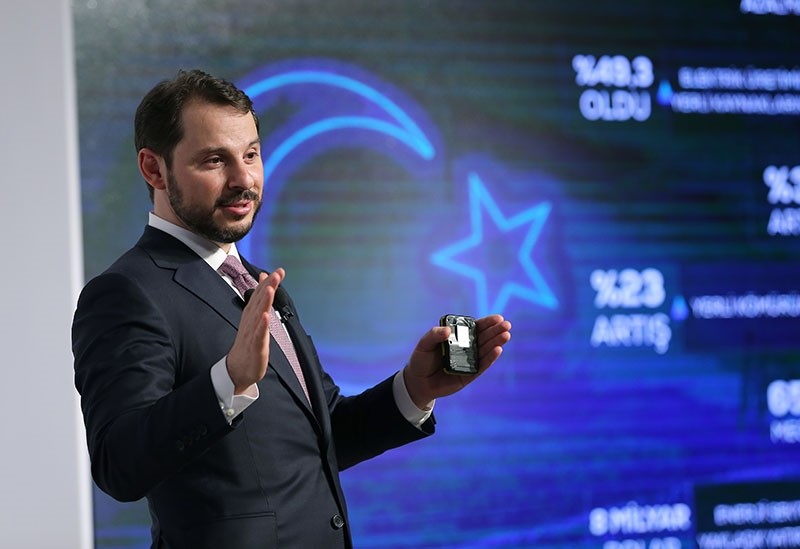 Energy and Natural Resources Minister Berat Albayrak announced the details of Turkey's domestic energy and mining policy yesterday. As the minister disclosed a detailed map of Turkey's energy strategy, focusing on the domestic resources, he underscored that by diversifying the energy supply, Turkey will decrease its dependence on energy resources through increasing investments in liquefied natural gas (LNG), Floating Storage and Regasification Units (FSRU), and by expanding the storage capacity of oil and natural gas storage.

Turkey to invest in more FSRUs

Noting that the ministry decided to strengthen the LNG infrastructure due to information suggesting that the LNG share of the gas to be consumed in the world over the next 10 years is likely to surpass pipe gas, and therefore hit the button, Albayrak said that they will increase Turkey's daily LNG capacity, which stood at 34 million cubic meters at the end of 2015, to 64 million at the end of the second year and up to 107 million cubic meters at the end of this year.

"Within two years, we will eliminate a very important infrastructural gap. The first [Floating LNG plant] of the FSRU infrastructure was commissioned in December in record time," Albayrak said, suggesting that the second one will hopefully be implemented this year and that they will complete this process by commissioning the third in the Marmara Region, which is especially critical.

Adding that with a seismic search vessel named Oruç Reis, which began operating this month, in addition to the already operational Barbaros Hayrettin vessels, as a country surrounded by the seas on three sides, the country will actively use the seas with one vessel in the Mediterranean and another in the Black Sea. With a new exploration drilling vessel to be purchased this year, Albayrak said that they will carry out drilling activities in the seas, two in the Black Sea and two in the Mediterranean Sea each year for the first time in history. "Everything is ready. The more you look, the more you will find. Now we will be much more active in sea drilling in our region as well," Albayrak said.

Pointing out that the government has important targets regarding oil storage, Albayrak said Turkey is not at its target level when it comes to oil storage, noting that their aim is to reach a storage capacity of 5 million tons. "With very swift geographical positioning, we will take this step so Turkey will not have internal problems in times of small crises."

A national wind tender ahead

Domestic production, and research and development (R&D) are essential for Turkey's development, he said, adding that domestic coal resources, which appear to be more calorie-rich than previously thought, will be an important part of Turkey's energy strategy.

"One of my personal ambitions was to create a national solar energy tender, and we did this. Our next step is to set up a national wind tender," he said, adding that discussions have been held with significant global wind energy companies to obtain their input in order to revise strategies before holding the wind tender before the end of the summer.

Turkey has already begun its strategy to boost the country's domestic energy resources, including coal and renewables, and the capacities from these are set to further grow in the share of the country's total energy mix.

Moreover, the minister also highlighted the significance of nuclear energy for Turkey's energy supply security. "In the process, which we call a 60-year dream, when the talks are ongoing on the third plant, Akkuyu in particular, our goal is to commission nuclear power rapidly and reach a capacity of 10 percent," the minister said, underlining that the capacity is important 24/7, and that at the point of domestic and renewable resources, this portfolio will provide an important infrastructure.

Turkey's geophysical map to be complete by 2018

By scanning all of Turkey's geographical area, from its vegetation cover to the topographical structure, Albayrak also indicated that Turkey will complete its geophysical map in 2018, thus revealing the mining resources that Turkey owns. As Albayrak emphasized, mining will enable Turkey to advance in value-added production.

Albayrak stated that in areas where the country is dependent on imports, it has caught the highest rate of domestic electricity generation of the last 15 years in 2016, at the point of increasing domestic resources, stressing this will not be enough and that the target is to meet at least two-thirds of its electricity needs from domestic resources. Recalling that the highest increase in the domestic coal so far was experienced last year, Albayrak said that the investments are ongoing and the locality rate in electricity generation is 50 percent. "The basis of Turkey's national energy and mining policy is based on two elements, namely a strong economy and national security. If you manage the dependency strategy in the right direction, a window opens to a strong foreign policy," Albayrak said.