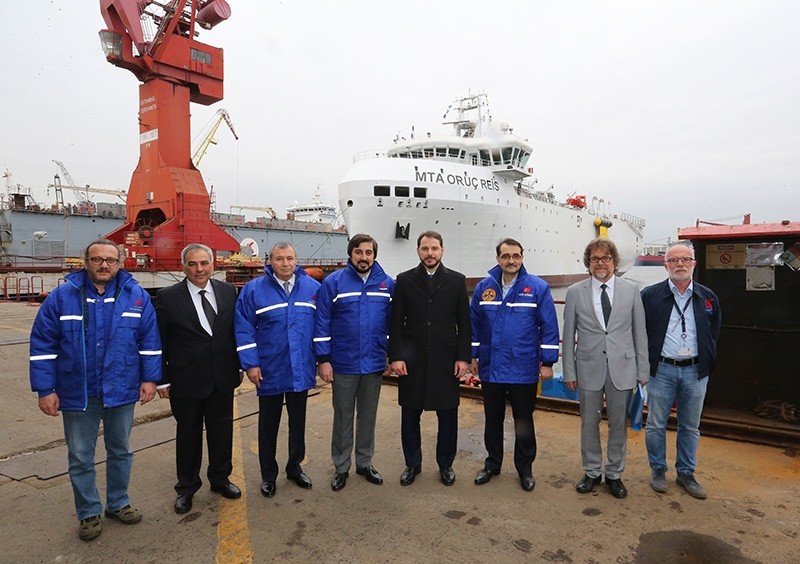 As Turkey tries to diversify its energy supply resources by taking advantage of resources in and around Turkey, the country is set to launch a second seismic vessel to have a say in oil and gas explorations in the region

Turkey's second seismic exploration vessel, the Oruç Reis, will start operating in the Mediterranean this month. While conducting on-site examinations in the shipyard where the vessel is being built, Energy and Natural Resources Minister Berat Albayrak said, "Our vessel will start a three-dimensional seismic search in the Mediterranean this month."

Having announced Turkey's national energy strategy on Thursday, Minister Albayrak also hit the start button with regards to oil exploration, the most important leg of the new policy. Conducting his last evaluations on the MTA Oruç Reis, which is days from launchıng, Albayrak said, "With the Barbaros Hayrettin vessel in the Black Sea and the Oruç Reis in the Mediterranean this month, we will conduct non-stop both two-dimensional and three-dimensional (2B/3B) seismic surveys on our two seas."

Pointing out that Turkey is surrounded on three sides by the Sea of Marmara, the Mediterranean Sea and the Black Sea, Albayrak emphasized that intensive studies will be carried out during the exploration and drilling process in Turkey, noting: "We completed it before April 16 by the grace of God and we are launching our ship on the sea. We have recently taken the first steps with the Barbaros Hayrettin Pasha vessel. We named the second [Oruç Reis], so they are like two siblings." Albayrak said there would be a more aggressive process in exploration and drilling activities in Turkey soon as part of the National Energy and Mining Policy.

Albayrak said he will monitor the drilling and exploration activities that have been launched and that by the end of this month, they will hopefully launch drilling activities with an intensive strategy in the Mediterranean and Black seas with the domestic exploration and drilling vessel to be added to the portfolio. "As a result, we will witness developments in the seas around us in coming years, which will be much more tangible and pleasing for our country. The more you look for and work, the more you will find," Albayrak said, adding that for this reason, they will call it "Great Turkey" or "Strong Turkey" for a policy to solve Turkey's systematic infrastructure problems, especially in energy and mining policies in the past 15 years. He said, "We are going to be one of the top 10 economies in the world."

"The Oruç Reis, more than 90 percent of which is domestically manufactured, is a direct result of the efforts that our domestic firms have put forth at the point of added value," Albayrak said. Stressing that the future will be bright, Albayrak pledged that they would never stop efforts to make further developments, adding that more good news will be announced soon.

With 2B/3B seismic surveys to be carried out with the vessel, it will be possible to examine depths of 20,000 meters on the sea floor. There are also systems onboard that allow researchers to take samples from the sea floor. Detailed mapping and imaging will be performed on the seabed for hydrographic and oceanographic studies. With a wired robotic system onboard and operated under the sea, it will be possible to conduct seismic observations and take samples at depths of up to 1,500 meters. In addition, current measurements, water sampling and physical, chemical and biological analysis and CTD system surveys will be performed.

Two years ago, Turkey's premier exploration vessel, the Barbaros Hayrettin Paşa, conducted oil and natural gas explorations off the coast of Cyprus, but its activities were interrupted in March 2015 when tensions arose between the Greek Cypriot administration and the Turkish Cypriot government regarding sovereign ownership of the resources.

The Greek Cypriot administration previously initiated a tender process for exploration activities in the contested natural gas fields including blocks 6, 8, and 10, to the ire of Turkish foreign affairs authorities, which assert that a considerable portion of block 6 is located beneath the Turkish continental shelf. Greek Cypriot President Nicos Anastasiades claimed that the tender issue and the use of the resources in these oil fields is a matter of sovereignty for the Greek Cypriot administration.

The Greek Cypriot partnership with foreign companies such as Italian energy giant Eni, which allowed these companies to carry out seismic exploration, caused tensions to flare up between Turkish and Greek administrations and negatively affected peace talks on both sides. The Turkish Republic of Northern Cyprus has since stated that the island's resources belong to both communities.

Due to the dispute over Cyprus's maritime Exclusive Economic Zone, established with the 1982 United Nations Convention on the Law of Sea and covering 13 exploratory drilling blocks, the exploitation and export of the gas discovered in this area has not been allowed for use or trade.