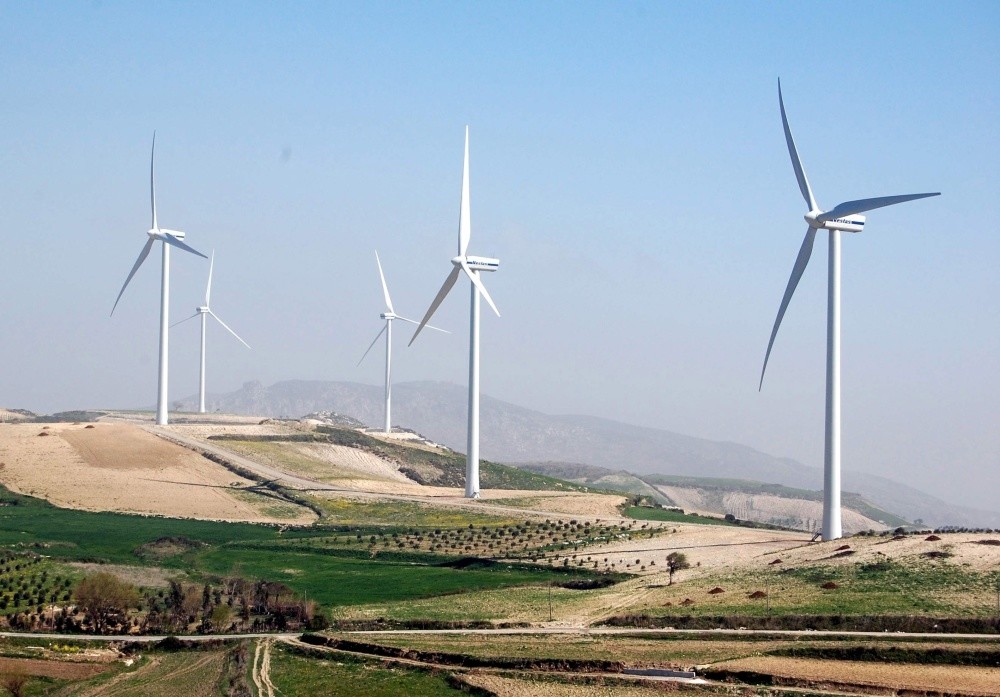 A number of European and Chinese companies have reportedly shown interest in Turkey's Renewable Energy Resource Areas (YEKA) tender, slated to be held in the near future.

The tender specifications for YEKA listed conditions such as a minimum of 65 percent of the wind turbines will have to be manufactured using domestic resources.

New regulations are also on the way for the wind power sector in line with the Ministry of Energy and Natural Resource's goal of reducing Turkey's external dependency on energy and realizing its goal of ascending to the league of energy exporting countries.

The conditions would also require the company's employment to include 90 percent domestic labor in the wind power plants and at the factory, along with 80 percent in research and development (R&D).

The winning firm will also need to carry out R&D activities in Turkey for 10 years, with a budget of $2 million in the first year, $5 million for the second and $10 million for each subsequent year.

According to the draft specification on the allocation of wind energy resource areas and connection capacities prepared by the Energy and Natural Resources Ministry, important arrangements will be made for the localization of the wind turbine technology.

Installed power upto 1,000 megawatts
The Energy Ministry has determined that the project aims to increase the installed national electricity generation capacity through using renewable energy technologies up to 1,000 megawatts.

Participants will also be required to have produced wind turbine components with a minimum cumulative of 2,000 megawatts in total over the last two years.

More areas of renewable energy to be recommended
The winners of the tender will determine the candidate YEKAs and their capacities in the connection zones, which will be determined by the ministry, group them on the basis of the region and submit proposals within 90 days from the date of signing of the contract.

If the candidates are declared YEKAs in the Official Gazette, the projected construction period of the renewable energy systems (RES) to be installed in each of the YEKAs and the RES capacity to be operated every year will be determined in accordance with the specification.

The installed power of the RES in each proposed YEKA cannot be under 50 megawatts, while materials used for the RESs will also have to pass the Turkish Standards Institute's (TSE) certificate of conformity.

Imports may be allowed in the production of the wind turbines only in unlikely cases, such as strikes, lockouts or bankruptcies. However, the number of non-domestic wind turbine productions will not exceed 10 percent of the total number of wind turbines.

Large AMOUNT OF investment in R&D
Responsible companies will also need to establish an R&D center in Turkey and continue operations for at least 10 years. They will have to have a budget of at least $2 million for the first year, $5 million for the second year and $10 million for each subsequent year.

The electricity price per kilowatt-hour specified in the contract will be applied for 15 years from the date of signing of the contract. The company that will eventually land the project will have to issue a letter of guarantee worth at least $100 million.

Domestication of wind turbines
Recalling the tender held last month for the Karapınar Renewable Energy Resource Area (YEKA), a 1,000-megawatt solar energy power plant to be installed in central province Konya, Albayrak said that the specifications for a wind power plant within the framework of renewable energy resource areas will be announced in a week or two.

"We have met with many a large wind power generator company and will announce the specification, which will be shaped in accordance with the results of negotiations.We will also put YEKA application into practice in the wind power before the end of this summer. We will open the way for an enormous domestication of wind turbine technology, which has about 8,000 different components," Albayrak added.

Meanwhile, according to the data compiled from the data released by the ministry, the installed electricity power reached 79,000 megawatts in the first quarter of 2017. During the said period, an additional capacity of 958 megawatts brought to the installed capacity. This capacity stood at 858 megawatts last year during the same period.