Iceland drills 4.7 km down into volcano to tap clean energy 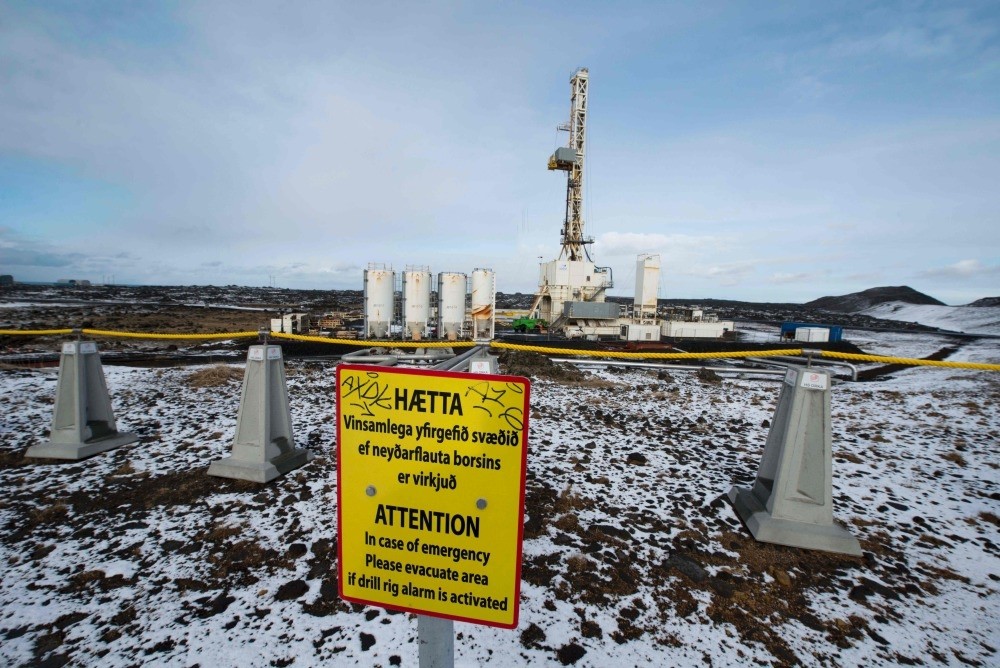 The Reykjanes geothermal power station.
by May 06, 2017 12:00 am
It is named after a Nordic god and drills deep into the heart of a volcano: "Thor" is a rig that symbolizes Iceland's leading-edge efforts to produce powerful clean energy. If successful, the experimental project could produce up to 10 times more energy than an existing conventional gas or oil well, by generating electricity from the heat stored inside the earth: In this case, volcanic areas. Launched in August last year, the drilling was completed on Jan. 25, reaching a record-breaking depth of 4,659 meters (nearly 3 miles).At this depth, engineers hope to access hot liquids under extreme pressure and at temperatures of 427 degrees Celsius (800 Fahrenheit), creating steam that turns a turbine to generate clean electricity. Iceland's decision to harness the heat inside the earth in a process known as geothermal energy dates back to the 1970s and the oil crisis. But the new geothermal well is expected to generate far more energy, as the extreme heat and pressure at that depth makes the water take the form of a "supercritical" fluid, which is neither gas nor liquid.

"We expect to get five to 10 times more power from the well than a conventional well today," said Albert Albertsson, an engineer at the Icelandic energy company HS Orka, involved in the drilling project.

To supply electricity and hot water to a city like Reykjavik with 212,000 inhabitants, "we would need 30-35 conventional high temperature wells" compared to only three or five supercritical wells, says Albertsson. The cost would be much less.

Scientists and the team working on the "Thor" drill project have two years to determine its success and the economic feasibility of the experiment, which is called the Iceland Deep Drilling Project (IDDP).

Situated not far from the Blue Lagoon, whose steaming blue waters attracted more than 1 million tourists last year, the IDDP overlooks craters formed by the last volcanic eruption 700 years ago that covered this part of the Reykjanes peninsula with a sea of lava. The peninsula's moon-like landscape also attracted NASA training missions in 1965 and 1967, aiming to prepare astronauts for unknown landscapes they might encounter on the moon.

A Nordic island nation, rich in geysers with fountainlike jets of water and steam, hot springs and breathtaking volcanoes, Iceland is currently the only country in the world with 100 percent renewable electricity. Geothermal accounts for 25 percent, while the rest comes from hydroelectric dams.
RELATED TOPICS