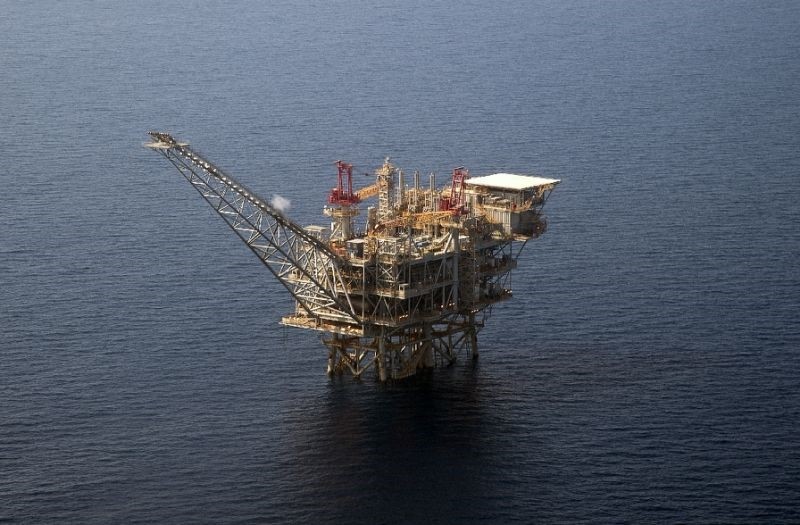 The Tamar Israeli gas-drill platform in the Mediterranean Sea off the coast of Israel.
by Daily Sabah with AA May 09, 2017 12:00 am

After discovering the Tamar and Leviathan natural gas reserves, the largest ever discovered, Israel's Delek group hopes to conduct exploration work for Turkey, as the country starts its activities in the Mediterranean

Citing the likely presence of significant oil and natural gas resources in the eastern Mediterranean, Israeli oil and gas exploration firm Delek Drilling and Avner Oil and Gas Exploration has said that it aspires to take its investments in Turkey even further.

The CEO of Delek Group Yossi Abu said that they believe there are more oil and natural gas resources in the region while emphasizing that the launching of Turkey's natural gas exploration activities in the Mediterranean was an important step by the Turkish government.

"As a company that is highly experienced in exploration activities in this particular region, we are very happy to invest in Turkey's focused efforts in natural gas exploration and production," Abu said.

Speaking to Anadolu Agency (AA), he asserted that Delek Drilling is the exploration and production wing of Delek Group, one of Israel's largest corporate groups that operates in various sectors.

Pointing to the fact that the company has, for the past two decades, conducted exploration and production activities predominantly off the shore of Israel, Abu said, "Israel has continued its oil and natural gas exploration activities through long-term government structures and companies for a long time and Delek Drilling began operating after the privatization of the energy sector in the mid-1990s."

Abu claims that Delek Drilling is the first company to have conducted offshore explorations off the coast of Israel with the Mari B. project. "After this, along with our long-time partner Noble Energy, we first discovered Tamar, the largest natural gas reserve ever discovered in the world, in 2009, followed by Leviathan, which boasts an even larger reserve than Tamar. Moreover, the company also achieved three new discoveries around the world. Now, we have a considerable amount of proven reserves off the shore of Israel."

Exploration in the Mediterranean

The Delek CEO said that Turkey's natural gas exploration activities in the Mediterranean are the second most important step taken by the Turkish government after explorations in the Black Sea.

"We believe that there is potential for more oil and natural gas resources to be uncovered in the region [the Eastern Mediterranean]; therefore, the steps taken by the Turkish government to launch natural gas exploration activities in the Mediterranean are very important. I think there is potential for exploration of more oil and gas off the shore of Turkey. We are very happy to invest in natural gas exploration and production in Turkey as a highly experienced company in exploration activities in the region." He also highlighted that if the Turkish government allows, they will also assist with seismic analyses and other research activities.

Earlier, a Turkish seismic ship embarked on explorative surveys on April 21 in the eastern Mediterranean for oil and gas resources and will continue conducting test drillings until May 31. The explorations form part of the "assertive course of explorative and sounding works," announced by Turkey's Energy Minister Berat Albayrak.

Abu also noted that they were closely monitoring developments in the Turkish natural gas market, reiterating the government's recent introduction of a comprehensive strategy program for the energy sector.

Stressing that one of the key points in the new strategic program is the diversification of suppliers, Abu stated that Israel can play a crucial role in this regard with gas from the Leviathan and Eastern Mediterranean reserves, adding that this will be a new source for the Turkish market.

Underlining that this is not only a new but also a reliable source, Abu said the Turkish government provides incentives to people who are willing to invest in natural gas storage, adding that there are currently investment projects for storing between 2 and 4 billion cubic meters of natural gas.

According to him, the Leviathan has 620 billion cubic meters of gas reserves and if it can be connected to the Turkish market, Turkey will reach a significant gas storage target within the scope of these projects. He also pointed out that in Turkey, between $2 and $3 billion has already been invested in storage projects that can hold at least 4 billion cubic meters of gas.

'Good combination for both sides'

In the first phase of the Leviathan project, Delek has already decided to supply natural gas to regional markets including Palestine, Jordan, and Egypt along with the Israeli market.

Abu said that the company is now moving towards the second stage of the project, under which gas can potentially be sent to either liquefied natural gas (LNG) terminals in Egypt or offered to the Turkish market.

"Therefore, we are frequently visiting Istanbul and Ankara. There are ongoing talks on these two alternatives and I really see a window of opportunity to construct a pipeline from Israel to Turkey," he said. "We are holding very constructive talks with the government through the Ministry of Energy, and we remain deeply committed to this project. This strikes a real balance between Turkey's needs and what we can provide."

Noting that demand for gas in the Turkish market peaks during the winter season, Abu said, "Our demands for gas from the Levant basin are at their highest during the summer. So, this project offers a good combination for the both sides."

With a possible agreement likely to be signed between Turkey and Israel within the framework of the normalization process, which gained momentum in the second half of last year, the option of transferring resources from the region to international markets through Turkey has also improved. Following a visit by Israeli Minister of National Infrastructure, Energy, and Water Resources Yuval Steinitz to Turkey last October, the two countries initiated dialogues for the proposed natural gas pipeline project. Leviathan and Tamar, Israel's largest natural gas fields, are estimated to hold some 800 billion cubic meters of natural gas reserves. Minister Steinitz had announced that besides these two, another 2.2 trillion cubic meters of natural gas were yet to be discovered in the region.