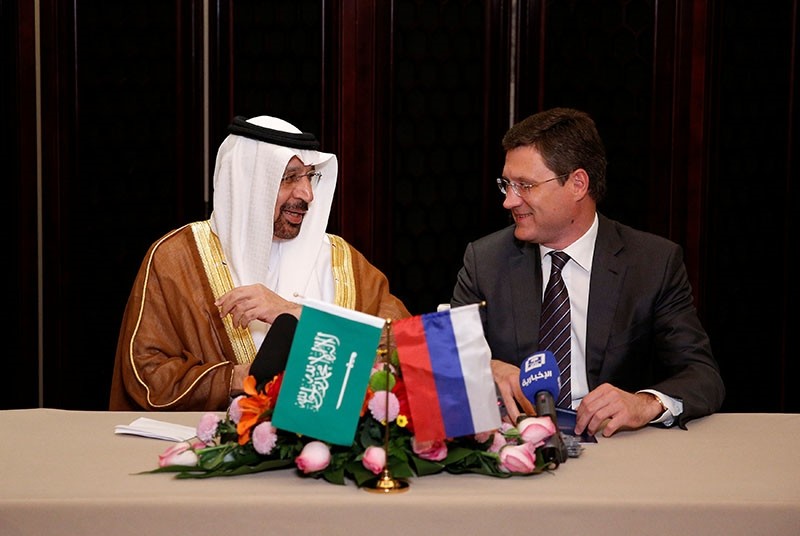 Saudi Arabia and Russia, the world's top two oil producers, agreed on Monday on the need to extend output cuts for a further nine months until March 2018 to rein in a global crude glut, pushing up prices.

Saudi Energy Minister Khalid al-Falih and his Russian counterpart Alexander Novak said in a statement they would "do whatever it takes" to reduce the inventory overhang, using a phrase coined by European Central Bank President Mario Draghi five years ago in his successful bid to defend the euro.

Oil prices hit a three-week high after the announcement, while shares of oil majors Exxon and Chevron were up 1 percent in premarket trading. Benchmark Brent oil prices rose, trading up $1.39 at $52.23 per barrel by 1407 GMT as the market had previously expected the cuts to be extended by as little as six months.

The Organization of the Petroleum Exporting Countries meets in Vienna on May 25 to consider whether to extend output cuts agreed in December last year between OPEC and 11 non-member countries, including Russia.

With a nine-month extension now the minimum expectation for the OPEC meeting, the group has a lot of work to do to persuade its members and some non-OPEC producers to back the move.

OPEC member Iraq, whose production is growing fast, has said it would support renewing the deal only for six months.

Non-OPEC member Kazakhstan said on Monday it would struggle to join any new deal on the old terms, as its own output was set to jump. Oman said it fully supported the idea of a nine-month extension.

OPEC wants to reduce global oil inventories to their five-year average but so far has struggled to do so. Stockpiles are hovering near record highs, partly because of rising production in the United States, which is not part of the existing deal.

"There has been a marked reduction to the inventories, but we're not where we want to be in reaching the five-year average," Falih told a briefing in Beijing alongside Novak.

"We've come to the conclusion that the agreement needs to be extended."

The briefing took place as Russian President Vladimir Putin was in Beijing on an official visit. Putin, Russia's ultimate decision-maker, said he had recently met with the biggest Russian oil firms and they backed a nine-month extension.

Russia and Saudi Arabia heavily depend on oil revenues. Last year they agreed the first joint output cuts in 15 years despite major political differences, including their support for opposite sides in the Syrian war.

Saudi, the de-facto leader of OPEC, and Russia, the world's biggest producer, together control a fifth of global supplies. Their latest joint action was spurred by oil prices dropping to under $50 per barrel, below their budget needs.

Under the current agreement that started on Jan. 1, the 13-country OPEC and other producers pledged to cut output by almost 1.8 million barrels per day in the first half of the year.

"OPEC and Russia recognize that in order to get the market back on their side they will need 'shock and awe' tactics where they need to go above and beyond a simple extension of the deal," said Virendra Chauhan, Singapore-based analyst at Energy Aspects.

"The market will also be looking at export cuts and not just production cuts, which is what is required to rebalance the market."

So far, OPEC producers have not yet debated whether to deepen the cuts from July, OPEC sources told Reuters.

If producers maintain their cuts at the current pace, it could push the market into a small deficit by the fourth quarter, said Edward Bell, director of commodity research at Emirates NBD in Dubai.

U.S. drilling activity last week rose to its highest in two years, while U.S. production has jumped more than 10 percent since its mid-2016 trough.