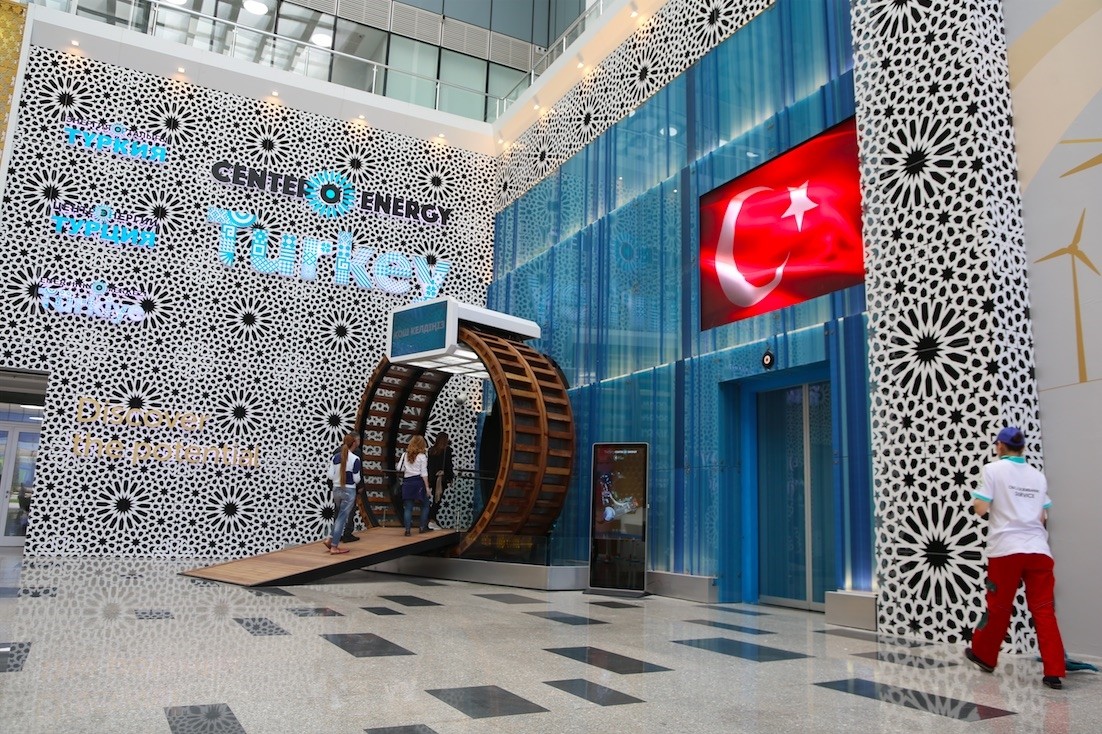 To increase its visibility at international fairs by exhibiting local achievements,Turkey is now ready for Expo 2017 Astana where the country will highlight its significant position in energy security and sustainable energy projects

Turkey is ready to leave its mark on Expo 2017, set to start in Kazakhstan's capital Astana on June 10. The Turkish pavilion, set up on behalf of its Ministry of Economy on a 1,000-acre area is complete with domestic products.

It will also carry the message that Turkey is the "go to hub" in matters such as world peace, sustainable energy, fair distribution and energy security.

"Turkey is the center of the regional energy trade as well as an important player in the safe transport of energy to consumers. We want to share our idea of global synergy for sustainable energy with the whole world by merging it with culture and historical richness," Deputy Minister of Economy Fatih Metin said. Expo 2017 takes place June 10-Sept. 10 under the theme "Future Energy" with 115 countries and 22 international organizations in attendance

From its 1,000 acre-pavilion, covering more than half of the exhibition area, Turkey will deliver a message that "energy is an important tool in ensuring peace, not a global war."

The fair, which covers a total area of 1,740 acres, includes shopping and cultural centers and is expected to attract almost five million visitors.

It will also hold the Shanghai Cooperation Organization Summit, the Astana Economic Forum, the 8th International Forum on Energy for Sustainable Development and other important events.

The Turkish pavilion has been set up completely with domestic products on behalf of the Ministry of Economy. It has been designed in a unique style, with the slogan "Turkey is the Center of Energy," applied by the Dream Design Factory (dDF), which will run the pavilion during the three months of the expo. Since the first Expo was held in Hyde Park, London in 1851, the Ottoman Empire participated 17 times, while the Republic of Turkey has done so 18 times.

The Turkish pavilion, the most elaborate at Astana Expo 2017, is expected to offer different experiences to its visitors. Earlier, dDF Design successfully represented Turkey at the 2015 Milano Expo.

Emphasis on an inhabitable world

Speaking at the Astana Expo 2017 Fair's Turkish pavilion, Deputy Minister of Economy Fatih Metin said Turkey will emphasize energy as an important actor for an inhabitable world through its modern pavilion at the Astana Expo, as they did at the Antalya Expo 2016 Fair.

Stating that the Ministry of Economy aims to take the vision of Turkey, especially on issues of foreign trade and investment, one step further, Metin said that they coordinated the participation in Milan 2015 and that Turkey became the most visited pavilion there.

"We promoted our country throughout the fair in Milan. Now we are excited to organize the participation of Astana Expo 2017," Metin said.

Stressing that they do not see energy as the source of problems and conflicts of interest in the world, Deputy Minister Metin said, "We think that energy should be used as an important tool in ensuring global peace. At this point, we believe that our country is a center. In fact, the slogan 'Turkey is the Center of Energy' is the focus of our theme."

He also pointed out that Turkey is not only a route through which energy is transferred but also a hub of regional energy trade as well as an important player in the safe transport of energy to consumers; thus, they want to share the country's theme of global synergy for sustainable energy with the whole world by merging its rich culture and history.