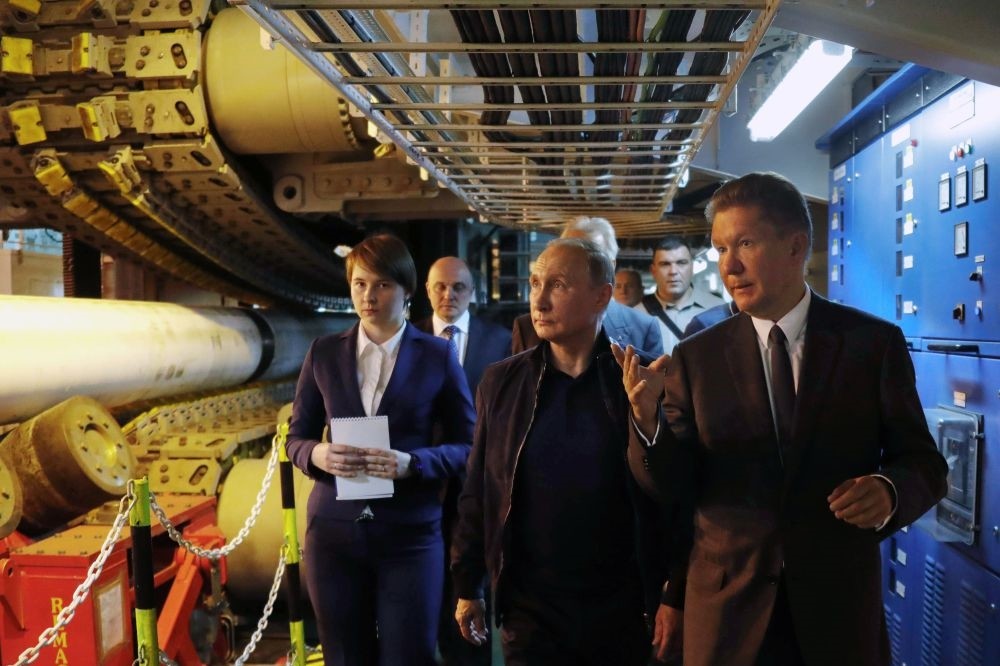 The pace of the recent developments in the Akkuyu nuclear power plant and Turkish Stream that are being carried out jointly by Turkey and Russia, indicate that ties between the two countries are entering a period of mutual advantage

President Recep Tayyip Erdoğan and his Russian counterpart Vladimir Putin discussed the Akkuyu Nuclear Power Plant in a phone conversation on Friday. During the conversation of the two leaders, Putin expressed the certainty that Russia and Turkey will manage to finish the construction of the first unit of Akkuyu power plant by the predetermined time.

Putin, who called Erdoğan from the Pioneering Spirit vessel, which will carry out the construction of the TurkStream natural gas pipeline's offshore section, thanked the Turkish president for the license issued by the Turkish Energy Market Regulatory Authority (EMRA) to the Russian operator. On July 15, the EMRA will grant a power generation license to Akkuyu Nuclear Company for 49 years for its Akkuyu Nuclear Power Plant project in southern Turkey's Mersin.

"We also hope to implement our works and plans on time in other areas, especially the first block of the Akkuyu Nuclear Power Plant, until the specified date," said Putin.

The $20 billion Akkuyu Nuclear Power Plant, with its four reactors, will have an installed capacity of 4,800 megawatts and a working lifetime of 8,000 hours per year. Once operational, the plant is estimated to meet around 6-7 percent of Turkey's electricity demand.

THE PIPE-LAYING OPERATIONS IN TURKSTREAM HAVE STARTED
During the phone conversation, Putin also informed Erdoğan that the TurkStream's deepwater pipe-laying process has started.

According to the statement made by the Kremlin, it was said that the operations of combining natural gas pipeline parts in the southern Russian town of Anapa on the Black Sea coast, from where the pipeline will start, were monitored. During the phone conversation, Putin, who visited the pipe-laying vessel, informed Erdoğan that the pipe-laying operations had started.

Stressing the profits of the project, Erdoğan said: "Thanks to TurkStream, it will be ensured that the Russian natural gas coming to our country via the Western Line and the Blue Stream is directly transmitted to Turkey without being dependent on the transmission system of any country. The TurkStream project is a beautiful symbol of our foreign policy and win-win understanding that argues that energy should not be a cause of conflict in international relations but a unifying instrument for peace."

Russian President Putin informed that the first line will be complete next year and the second one by 2019. "There are some topics such as the entry and exit points of the project in Turkey as well as the environmental impact that we have to discuss. But if we continue working at our current pace, all plans will be delivered on time."

TURKISH-RUSSIAN COOPERATION ON A HIGH LEVEL
Emphasizing the importance of the cooperation between Turkey and Russia, Erdoğan said, "These projects, which established interdependence in terms of our economic and political bilateral relations and is the insurance of the relations, have an exceptional place. Energy projects between our countries, especially natural gas projects have been an important and reliable part of our energy supply security for nearly 30 years."

Stating that Russia is an important energy actor in the region with its wide natural gas resources and strong infrastructure, the president noted that the Russian Federation is a reliable and stable partner of Turkey in the field of energy.

"We are determined to further develop this partnership and further strengthen our friendship. With the large-scale projects such as the Akkuyu Nuclear Power Plant and TurkStream, which are expected to be completed in the near future, our friendship will be riveted," Erdoğan said.

"The level of the Turkish-Russian cooperation is much higher than the level of cooperation with many countries. While the process of obtaining administrative approvals in other countries continues for many years, we are completing these processes with Turkey within a few months," said Putin.

According to the Russian news agency Sputnik, Putin also told Erdoğan that they were ready to send Russian gas to southern and southeast European countries via Turkey. "We are ready to send gas to southern and southeastern Europe, if our partners demand it. As far as we can see, our partners have interest. I assure you that we will safeguard your interests as well because our interests overlap in this regard," he said.