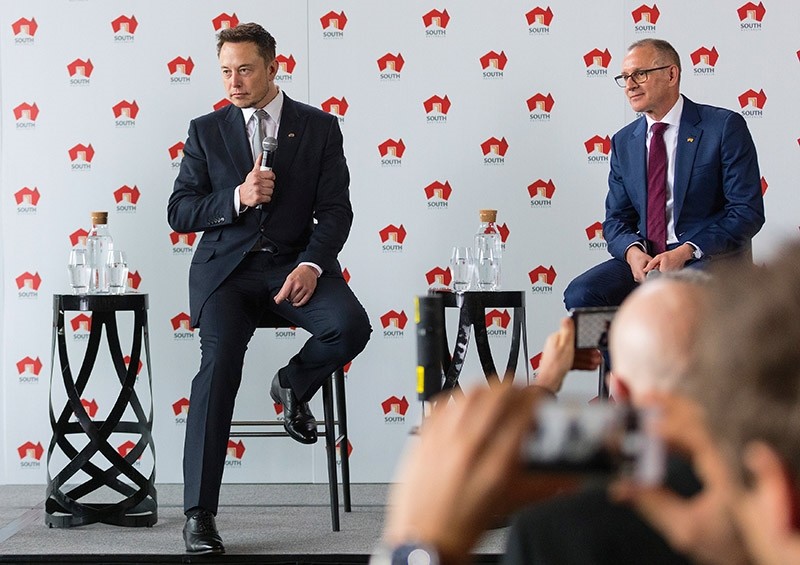 Tesla announced on Friday it will build the world's largest lithium-ion battery in southern Australia, part of a bid to solve an energy crisis that has led to ongoing blackouts across the region.

Tesla will partner with French renewable energy company Neoen to build the 100-megawatt battery farm in South Australia state, with Tesla CEO Elon Musk promising to deliver the system within 100 days of signing the contract or it will be free. The billionaire entrepreneur originally made the 100-day pledge via Twitter in March, and he and South Australia's government confirmed on Friday that the deadline was part of their official agreement.

"The system will be three times more powerful than any system on earth," Musk told reporters in the state capital, Adelaide. "This is not like a minor foray into the frontier — this is like going three times further than anyone's gone before."

South Australia, which relies heavily on solar and wind-generated energy, has been scrambling to find a way to bolster its fragile power grid since the entire state suffered a blackout during a storm last year. Further blackouts plagued the state over the next few months.

The battery farm is part of a AU$550 million ($420 million) plan announced in March by South Australia Premier Jay Weatherill to make the state independent of the nation's power grid. The Australian Energy Market Operator, which manages the national grid, has warned of potential shortages of gas-fired electricity across southeast Australia by late next year. The shortage is looming as Australia is expected to soon overtake Qatar as the world's biggest exporter of liquid natural gas. Australia is also a major exporter of coal, which fires much of its electricity generation.

The South Australia battery will store energy from Neoen's Hornsdale Wind Farm near Jamestown, about 200 kilometers (120 miles) north of Adelaide. It will deliver energy during peak usage hours to help maintain the state's supply, and could power 30,000 homes, Tesla said.

"You can essentially charge up the battery packs when you have excess power and where the cost is very low, and it discharges when the cost of production is high — this lowers the average cost per hour to the customer," Musk said. "It's a fundamental efficiency improvement."

The installation of the battery is expected to be complete by December. The cost of the project has not been released.

Musk said it was "common sense that if you have solar you must have battery because otherwise your power is going to be proportionate to how sunny it is".

"I specifically think that the consistently lowering cost of batteries, coupled with renewables, is going to fundamentally reshape the energy landscape much faster than anyone thinks it will," Cal Lankton, Tesla's vice president of global infrastructure operations, added.

Musk acknowledged his company had to overcome the technical risks associated with building a project at such a large scale, but said Tesla was confident of its success.

The high-flying firm, known for producing electric cars, has agreed to deliver the battery "within 100 days or it is free", Weatherill added.

No figures were given for the cost of the contract.

Neoen, which has built major projects around the world since being set set up in 2008, operates Europe's biggest solar energy park in southwest France, which can produce the equivalent annual electricity to supply a town of 300,000 people.

South Africa-born Musk has envisaged Tesla as a company that can help reduce emissions by not only selling people electric cars, but also generating and storing the renewable energy that powers them.

Australia is one of the world's worst per capita greenhouse gas polluters due to heavy use of coal-fired power.