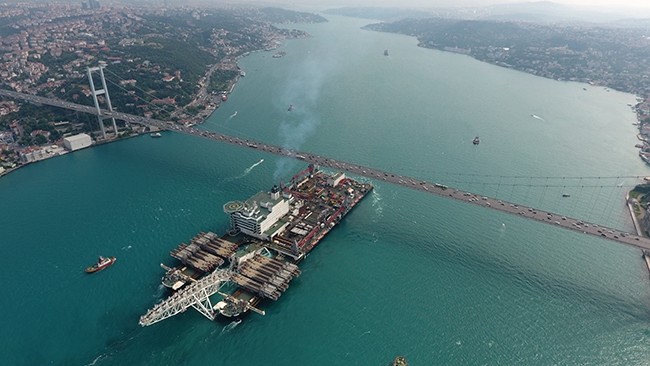 The Pioneering Spirit vessel, which will carry out the construction of the TurkStream natural gas pipeline's offshore section, passes through Bosporus, Istanbul, Turkey, May 31, 2017. (AA Photo)
by Daily Sabah Jul 11, 2017 12:00 am

"We have already agreed with them on the issue [of financing]. However, I cannot disclose any figures, in what percentage ratio will we do this," Özcan said, speaking at the 22nd World Petroleum Congress in Istanbul.

The BOTAŞ head said that the process of obtaining permits for the second line of TurkStream continues in a positive way, adding that "there are no pitfalls in it."

Özcan also confirmed that the land section of the pipeline would pass through northwestern Turkey's Kırklareli province near Kıyıköy village.

"Despite various rumors, there are no changes to this geography. However, one cannot say anything about whether there will be a way out in this village or somewhere nearby. There are engineering works going on both in the sea and on land, there are no problems here," Özcan said.