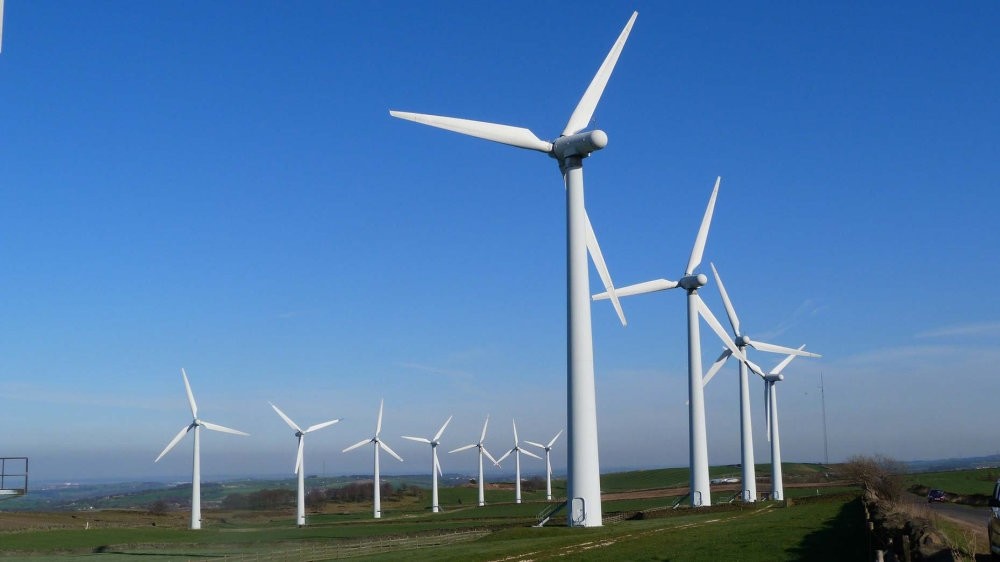 Spearheaded by Energy Minister Breat Albayrak, Turkey's latest initiative to expand it's energy capacity from domestic and renewable resources has attracted the attention of major players in the sector. It was evident when the country's wind power renewable energy area project received bids from the world's top eight wind turbine producers from Denmark, Germany, China and the U.S.

The eyes of international wind energy players are on Turkey. Applications for the 1,000 megawatt (MW) renewable source area wind licensing contract with a domestic equipment condition ended yesterday. Eight consortiums, including four German companies, as well as companies in the top 10 in the world in the production of wind turbines based in the United States, China and Denmark, submitted proposals for 1,000 MW Wind Energy Renewable Energy Resource Areas (YEKA) contract from the Energy and Natural Resources Ministry.

The application period for the YEKA) wind power plant (WPP) licensing contract, which is expected to be realized within the next month after the 710 MW wind farm capacity allocation contract bidding last month, ended yesterday.

The fact that the project covers would produce 1,000 MWs in a single plant has led some of the world's famous wind equipment manufacturers to show interest.

Eight giant wind turbine manufacturers submitted proposals for the second project of the YEKA strategy explained by Energy and Natural Resources Minister Berat Albayrak, who said: "We will make Turkey the production base for renewable energy technologies." PAGE 4

The market share of the applicants operating in the field of wind turbine production represents 90 percent of the global wind market.

While bidding is slated to be held in August, the winning consortium will take over 1,000 MW capacity in five regions designated as Kayseri-Niğde, Sivas, Edirne-Kırklareli-Tekirdağ, Ankara-Çankırı-Kırıkkale, Bilecik-Kütahya and Eskisehir.

The consortiums that bid on the contract are:

8 of top 10 companies in the worldVestas ranks first in the world in wind turbine production, followed by GE and China's Goldwind.

Siemens is the world's fourth largest producer of wind turbines, followed by Enercon and Nordex.

The market share of these companies represents 90 percent of the global wind energy market.

Previously highlighting that the the wind turbines will be produced with domestic resources at an event where he announced Turkey's national energy and mining strategy, Energy Minister Albayrak said, "We will open the way for an enormous domestication of wind turbine technology, which has about 8,000 different components."

The consortium that wins the contract bidding to be held with Dutch action method and to initiate the kilowatt-hour ceiling price at $7 dollars, will set up a wind turbine plant with an investment cost of over $100 million on the condition that a domestic input rate of 65 percent is provided.

Three-hundred to 450 domestic wind turbines will be produced in the plant, each with at least 2.3 MWs of power.

The consortium will carry out R&D activities for 10 years in at least three of the five areas in total, including wing, generator design, material technologies, production techniques, software and innovative transmission.

R&D activities will be carried out with 50 technical staff consisting of Turkish engineers at 80 percent, while the said company will allocate $5 million for these activities every year.

The license term of the project will be 30 years, while the establishment period of the plant has been determined as 21 months from the date of the signing of contract.

Meanwhile, according to the data compiled from the data released by the ministry, the installed electricity power reached 79,000 megawatts in the first quarter of 2017. During the said period, an additional capacity of 958 megawatts brought to the installed capacity. This capacity stood at 858 megawatts last year during the same period.

The winning company will invest over $1 billion in wind facilities. With the activation of the domestic WPPs, a minimum of 3 billion kilowatt hours of electricity will be generated every year, providing the annual energy needs of 1.1 million households.

Thanks to the future wind facilities, an average reduction of 1.5 million tons of yearly carbon dioxide emissions will be achieved.