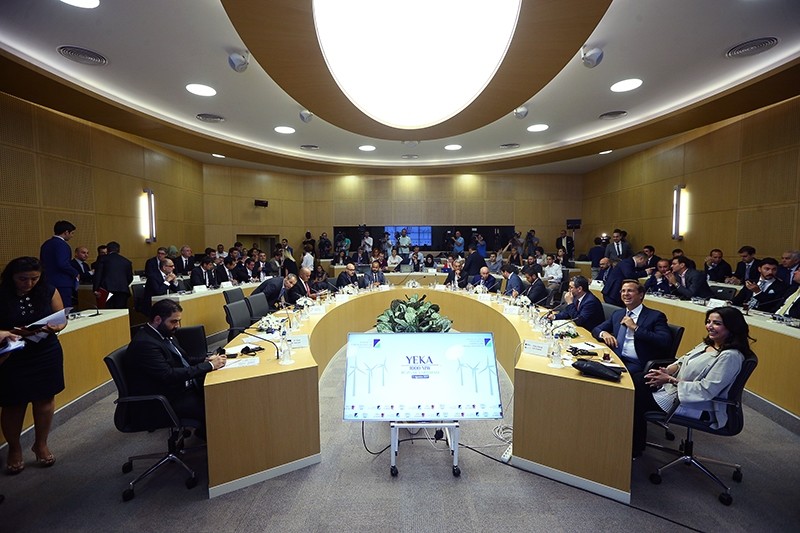 Led by continuous efforts of Energy and Natural Resources Minister Berat Albayrak, Turkey has taken an important step towards increasing the share of domestic and renewable energy resources with the latest wind power plant tender, which Turkish, German partners won, proving the long-standing economic partnership between the two countries

At a time when Turkish-German ties are shadowed under the political rift, a Turkish-German consortium, consisting of Siemens Gamesa-Türkerler-Kalyon, win the tender for the wind power renewable energy areas by offering $3.48 per kilowatt hours (kWh), which was $10.3 per kWh for wind power.

Bids for the second project were received last week and eight of the world's 10 largest wind turbine producers competed for the establishment of a 1,000-megawatt (MW) wind power plant. Four of those eight companies were from German, two from China, one from Denmark and one from the U.S. The tender on the wind power plant, the second project in the scope of the YEKA strategy, was held at the Energy and Natural Resources Ministry headquarters Thursday.

Wind turbines will be built in five different regions of Turkey, including Kayseri-Niğde, Sivas, Edirne-Kırklareli-Tekirdağ, Ankara-Çankırı-Kırıkkale and Bilecik-Kütahya-Eskişehir. The winners will activate a total installed capacity of 1,000 MWs, provided that it installs wind power of at least 50 MWs in each of these five regions.

With the YEKA competition, domestic production will also be provided for the first time in the field of technology. According to the tender specifications, the successful bidding company will establish the factory with over $100 million in investments. An average of 300 to 450 domestic wind turbines, with a power of at least 2.3 MWs, will be produced in the factory. On the other hand, the factory where YEKA's domestic wind turbines will be produced will have a production capacity of at least 150 units per year or 400 MWs per year wind turbine in single shift. The installation period of the factory will be 21 months from the date of contract signing. The specifications also stipulate that 65 percent of the wind turbines will be produced with domestic resources. Many of the components that will be needed to achieve this ratio will be supplied from domestic sources or will have to be manufactured locally. This will contribute to the direct and indirect development of several industries.

The winning company will also pledge to undertake research and development (R&D) activities to transform Turkey into a technology production center in the field of wind turbines. It will carry out R&D activities with 50 technical staff, with 80 percent of them being Turkish engineers, for a total of five years in at least three fields of wind-and-generator design, material technology and production techniques, as well as software and innovative gear boxes, and will dedicate $5 million to these activities every year. The installation and operation of the plant and the wind power plants, along with the R&D activities, will provide jobs for approximately 3,750 people.

The winning consortium will invest over $1 billion in wind facilities. With the introduction of domestic wind power plants, a minimum of 3 billion kilowatt hours (kWh) of electricity will be generated each year and the electricity requirements for approximately 1.1 million houses will be met annually. Thanks to the wind facilities to be installed, an average of 1.5 million tons of CO2 emissions will be reduced.

Speaking at a press conference held following the tender, Energy and Natural Resources Minister Berat Albayrak highlighted the significance of wind YEKA project for Turkey's goal to increase the share of domestic and renewable energy resources.

Underscoring that a Turkish-German consortium won the tender, Minister Albayrak said, "The contract is awarded to a German company Siemens. This, I believe, sends an important to the region and the world." Pointing out that Turkey and Germany has a-200-year old partnership history, Albayrak expressed his belief that this energy project will highly contribute to the Turkish-German relations.

The minister said that the visionary and courageous initiative of German companies which act on common sense and reason draws a positive picture for future partnership between the two countries.

Minister Albayrak also expressed that this wind YEKA projects proves Turkey's status as one of the top safest investment havens both in the region and in the world, despite the ongoing global and regional crises.

Drawing attention to the price offered by the winning consortium, energy minister highlighted that the contract was awarded at record prices worldwide, which will turn out lucrative for the Turkish economy and decrease the energy imports recorded at nearly $55 billion per year.

"This project does not only reduce the national energy costs, but also constitutes an important step toward establishing Turkey as a base for domestically-produced energy technology," Albayrak said, as the winning company will make R&D investments for at least 10 years and almost 65 percent of wind turbine with a 8,000 components will be produced with domestic resources.

Turkey to continue being a destination for German investments

Speaking to Daily Sabah on the wind YEKA tender, Arda Ermut, president of the Investment Support and Promotion Agency of Turkey, underscored the importance of the tender for Renewable Energy Resource Zones, qualifying it as a milestone in the Turkish energy sector.

"We, as the Investment Support and Promotion Agency [ISPAT], attach utmost importance to this auction with regard to foreign direct investments [FDI]. A German giant Siemens, with operations in Turkey for 160 years, won the tender with its Turkish partners in the consortium. This clearly showed that the recent political tension that escalated between Turkey and Germany does not spill over and harm the strong economic ties between the two countries," said ISPAT president, highlighting the fact that the recently strained political ties between Turkey and Germany has not yielded any impact on the investment decisions of German companies in Turkey.

"Turkey and Germany are indisputably two important trade partners and Turkey offers ample opportunities for German investors," Ermut said and emphasized the rapid increase in German investments over the last 15 years as the FDI amount of German companies during these 15 years reached almost $9 billion, bringing the FDI stock of German companies in Turkey to $13 billion. As of the end of 2016, more than 6,800 companies are operating in Turkey with German capital, he informed.

"I would like to assure that Turkey will continue being a stable and attractive investment destination for German companies and the dynamic and experienced team at ISPAT is ready to provide all the necessary services during the lifecycle of their investments in Turkey," Ermut assured.