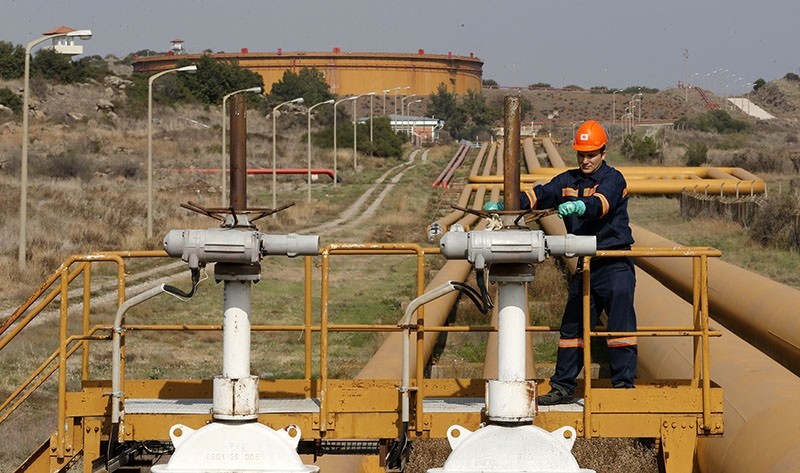 A worker checks the valve gears of pipes linked to oil tanks at Turkey's Mediterranean port of Ceyhan, which is run by state-owned Petroleum Pipeline Corporation (BOTAu015e), terminus of the Kirkuk - Ceyhan oil pipeline, on Feb. 19, 2014. (Reuters Photo)
by Daily Sabah Sep 26, 2017 12:00 am

The tensions over the controversial independence referendum held by the Kurdistan Regional Government (KRG) that put the oil flow from Iraq under threat pushed the price for Brent crude per barrel above $59 level Tuesday for the first time since July 2015.

The prices for international benchmark Brent crude rose more than $2 per barrel with gains exceeding 3.5 percent.

Whereas the prices for West Texas intermediate (WTI) crude rose more than $1.5 per barrel to $52.2, the highest closing level since April. WTI gains were over three percent.

On Monday, President Recep Erdoğan warned the KRG that Turkey could block oil exports from as a response to the referendum, which Baghdad, Turkey, Iran, the U.S., and the UN have all spoken out against.

"We'll see who KRG will sell its oil to, Turkey is in control of the valve," he said, referring to the Kirkuk - Ceyhan oil pipeline that connects oil fields in northern Iraq to the oil terminal in the Mediterranean.

Oil revenues are of crucial importance for the KRG's economy, which is suffering from a high rate of unemployment and maintains a lavish bureaucracy compared to its size.