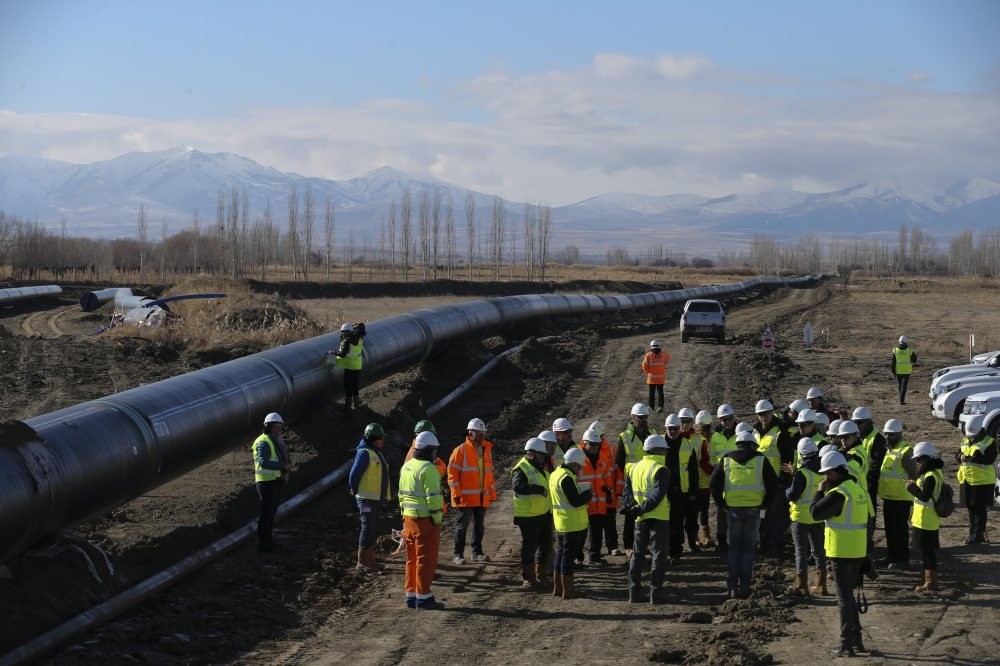 TANAP, which will be operational next year, will carry Azeria gas produced in Shah Deniz Stage 2 to Europe via Turkey and Bulgaria.
by Daily Sabah with AA Sep 26, 2017 12:00 am

Two neighbors with strong economic and political ties, Turkey and Bulgaria, are working together closer than ever to rampup cooperative efforts in the energy sector as the two key leaders in energy diversity and security in Europe

Turkey and Bulgaria are working more closely together amid efforts to expand their energy cooperation as partners in the Southern Gas Corridor. Earlier this month, Energy and Natural Resources Minister Berat Albayrak met with Bulgarian Prime Minister Boyko Borisov and Energy Minister Temenuzhka Petkova in Sofia where both sides expressed their determination to reinvigorate their energy partnership, especially regarding electricity and natural gas.Bulgaria's envoy to Ankara Nadezhda Neynsky drew attention to Minister Albayrak's visit to the country, noting that a decisive stance was taken to deepen bilateral collaborations, particularly in energy.

Speaking to Anadolu Agency (AA), Bulgarian Ambassador Neynsky stressed that Minister Albayrak's visit to the Bulgarian capital Sofia at the beginning of this month reiterates the will of both Turkey and Bulgaria to further broaden the scope of bilateral collaboration, especially in high-potential areas such as energy.

Both BOTAŞ and Bulgartransgaz EAD are working to complete the Gas Interconnection Turkey-Bulgaria (ITB) project, which is a common natural gas transmission network supported by the governments of both countries, according to the ambassador. The Bulgarian government, she went on to say, has completed the feasibility report on the Bulgarian side of the project, which is being financed through the EU's Connecting Europe Facility (CEF) - a key EU funding instrument for promoting economic, employment and competition growth through targeted infrastructure investments at a European level.

The feasibility study was submitted to Turkish partners and BOTAŞ will assess the study, Neynsky said. "Bulgaria pays particular attention to ITB. The Natural Gas Interconnection Project is part of the Southern Gas Corridor and aims to interconnect the transmission systems of Bulgartransgaz EAD and BOTAŞ," the ambassador indicated. She went on to note that the project is of vital importance for the diversification of energy resources and routes for both Bulgaria and southeast European countries. Moreover, the project will ensure accessibility to diverse natural gas resources, including Azeri gas and liquefied natural gas (LNG), through existing and potential entry points in Turkey.The ITB aims to develop interconnectivity between Bulgaria's Bulgartransgaz, EAD and Turkey's BOTAŞ gas networks. This will potentially enable the diversification of natural gas sources by supplying counterparts, as well as routes, resulting in increased security of supply in the region and better competition. The project, as part of the Southern Gas Corridor, is crucial in terms of security and diversification of the sources and routes of natural gas supply both to Bulgaria and through the country and the rest of Europe.

The Bulgarian ambassador highlighted that the geographical location of Turkey makes the country a natural bridge between oil and natural gas producers and consumers across Europe, noting: "Turkey is very significant for the maintenance and sustainability of energy security for southeastern Europe and European countries," emphasizing that 3.7 percent of global oil consumption takes places via pipelines which pass through Turkey.

Pointing out that Bulgaria aims to establish a European gas distribution network by developing joint projects with the European Commission (EC), the ambassador noted that the ITB will comply with European energy legislation and is listed in the Projects of Common Interest (PCI) of the EU.

More than 80 percent of compression stations in the region are located in Bulgaria, and most of them have recently been updated, according to the ambassador, who added that the natural gas distribution hub in the Balkan region would be nurtured by Azeri gas that will be transferred through the Trans Anatolian Natural Gas Pipeline Project (TANAP).

"We expect more gas from Iran, Israel, Turkmenistan and other countries to be carried to Bulgaria through Turkey," she said, affirming that the preliminary feasibility study on the Balkan natural gas hub, which will be completed in the second half of 2018, is nearly completed.

The ambassador also recalled that Bulgartransgaz EAD signed an agreement with the Shah-Deniz consortium in 2013, noting that 1 billion cubic meters (bcm) of gas from Shah-Deniz Stage 2 will be carried to Bulgaria through the TANAP pipeline in Turkey and the Trans Adriatic Natural Gas Pipeline Project (TAP).

Pointing out that economic relations between Bulgaria and Turkey have improved and bilateral trade volume has increased, Neynsky said: "In the first half of 2017, exports from Bulgaria to Turkey amounted to 1.1 billion euros - an increase of 16.5 percent compared to the same period last year. Regarding Bulgaria's imports from Turkey, these imports increased by 23.4 percent to 925 million euros, compared to the same period last year.

The total trade volume between our countries has reached around 2 billion euros in the first six months. I would like to underline that in the first half of 2016, the same figure stood at 1.7 billion euros. We are seeing a major increase in our trade with Turkey. One of the most important reasons for this is the positive economic development in both countries."

"Trade volume between the two countries has shown balanced development. Therefore, we think that there is serious potential for the improved development of our economic and commercial relations. Bulgaria wants to attract more investments and investors from Turkey. As close neighbors, we think that the most appropriate sectors in which we can realize our business potential are energy, tourism, electronics and transportation equipment, as well as the automotive, agricultural, culinary, logistical, pharmaceutical and medical sectors," Neynsky added.