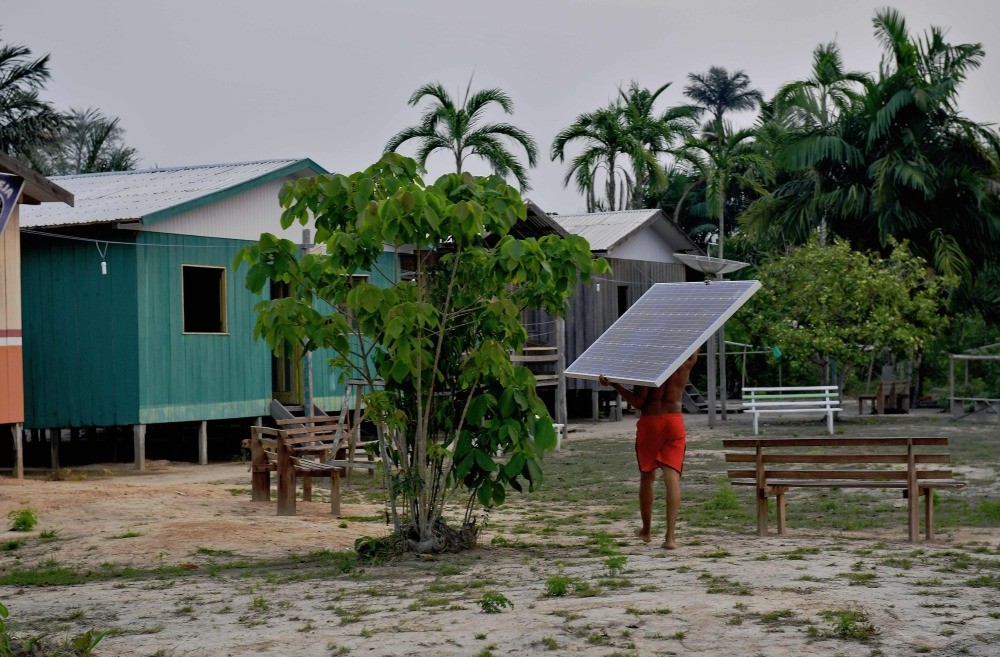 Solar panels donated by the World Wildlife Fund (WWF) and Brazilian government are carried to the village of Volta do Bucho in the Western Amazon region.
by Oct 12, 2017 12:00 am

In the darkest reaches of Brazil's Amazon rainforest, solar panels are bringing light and could help save the rainforest. Aurelio Souza is working to install solar panels in villages along the remote Purus and Ituxi rivers in the western Amazonas state.

"The Amazon is the last big frontier for electricity in the country," said the consultant for a joint program of the World Wildlife Fund (WWF) and Brazil's environmental agency ICMBio. "You have at least 2 million people [in the Brazilian Amazon] without access to modern energy." Bringing power to millions might not sound like an obvious way to preserve the world's greatest forest, already under constant pressure from loggers and farmers. But consider what the solar panels are replacing. In tiny communities of the Ituxi nature reserve, west of the city of Labrea, small-scale farmers almost universally depend on noisy, smoky generators for light and refrigeration, and frequent trips to buy more fuel at higher than usual prices. To keep fish they catch in the rivers fresh they also use large quantities of Styrofoam, another environmental menace.

"The reduction in the consumption of diesel cuts greenhouse gases and reduces the dependency of communities on fossil fuels," Souza said. The project was launched in July in a neighboring nature reserve, called Medio Purus, home to about 6,000 people who subsist on fishing and family farms. And without the din of generators drowning out the deep silence of the forest night, life is already changing. At the community school in the Cassiana community, part of Medio Purus, night classes taught by satellite link have already become a whole lot more rewarding now that the generator is no longer needed.

"We couldn't concentrate with the noise of the motor and a lot of our classes were cancelled because there wasn't enough fuel," said Francisca de Almeida, 30, who is in her second year of studies. Further up the river in the settlement of Jurucua, neighbors are using solar power to run a cassava mill, while Maria Francisca de Souza, 54, is finally able to have river water pumped to her house. She hopes to build her first bathroom soon.

The community association for the Ituxi reserve, with a population of barely 600, has hooked up to solar power to run a water well pump. There's even a refrigerator for special occasions that used to cost $400 a month in fuel. These might be small steps but innovation is the best bet for Brazilians in remote communities. Despite an official state policy of bringing power to the entire country, "the cost is very high in these places," Souza said.

For Irismar Duarte, vice president of the Ituxi association, the solar panels open the door to more progress.

"Everyone is looking for ways to innovate and people are adapting to the changes. That's what we're trying to do here," she said.

The association hopes to get a freezer next and ability to power equipment to ramp up production of acai, a potentially valuable fruit which so far is only grown for domestic consumption.