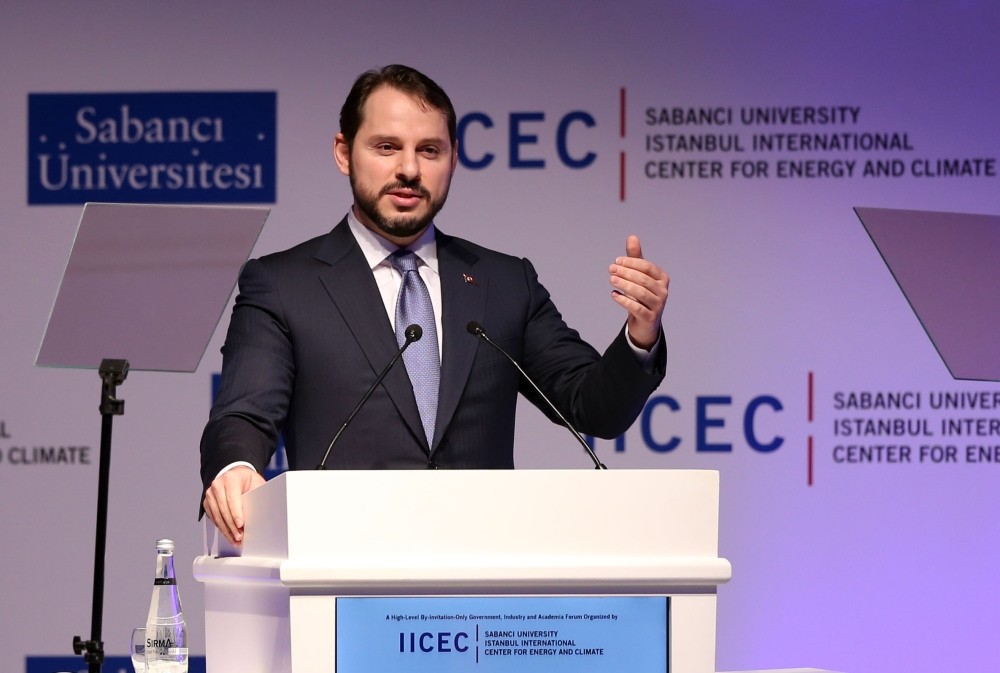 The increasing share of renewables in Turkey's energy portfolio is concrete proof of the country's determination to reduce carbon emissions and save the environment, Energy and Natural Resources Minister Berat Albayrak said

Turkey's increasing investments in renewables, particularly in solar and wind power plants within its framework for the Renewable Energy Resource Areas (YEKA) projects, has transformed the country's energy portfolio.

Addressing global and local stakeholders of the energy industry, scholars, representatives of non-governmental organizations, international institutions and business people, Albayrak explained how Turkey's energy portfolio has followed an expansionist policy in regard to renewables, along with the recently adopted YEKA model.

He also revealed that of the total installed capacity added in 2016 of around 55 percent was composed of renewable energy resources. As for 2017, 64 percent of the energy generation facilities installed in the first eight months of the year were renewable energy based.

Accordingly, Turkey ranked seventh in the world and third in Europe in terms of wind power plant capacity.

"At the end of August, some 35,874 megawatts, which is around 45 percent of the total installed capacity of 81,355 megawatts, consisted of renewable energy resources. In comparison, the share of renewables in the Europe Union was 42 percent," the minister said.

Albayrak pointed out that in 2016, renewables provided 29 percent of the total power generated across the EU and said: "In electricity generation from renewable resources, Turkey outperformed the EU by generating more than recorded 33 percent of its energy from renewable sources."

The roadmap, drawn up to accomplish supply security and domestication within the scope of the National Energy and Mining Policy, highlights sustainability and requires heavy investment in renewables.

Referring to the projections, the minister said: "This data regarding power generation proves that Turkey has an environment-friendly and sustainable energy portfolio that sets an example in the fight against climate change."

The minister recalled that the YEKA model, which was realized with a 1,000 megawatt solar power plant contracted to a Turkish-South Korean consortium in March and another 1,000 megawatt wind power plant contracted to a Turkish-German consortium in early August, does not only support the expansion of renewable energy, but also exhibits Turkey's role in ensuring sustainability and fighting climate change.

In addition to renewables, Minister Albayrak said that his ministry was planning for an investment infrastructure required for the utilization of local coal at new, environment-friendly and state-of-art plants.

Investments in renewable energy, low-carbon technologies, including nuclear power plants, and the utilization of clean coal are the tokens of Turkey's more sensitive approach to climate change when compared to other countries in same category regarding overall carbon emissions.

The emissions criteria of the new generation coal plants will be maintained well below the standards determined by the EU legislation, the minister announced.

"Local resources will be provided for the benefit of the country using cutting-edge technology without posing any threats to ecological balance," Albayrak said and added that environment investments in older thermal plants will be done by 2019 and brought up to levels compliant with new environmental standards.

In order for the Paris Agreement to yield desirable outcomes, the standards should be imposed in a just manner, the minister said and gave figures concerning per capita carbon emission by countries. Per capita carbon emission in Turkey stood at 6.07 metric tons while it was recorded at 16.2 tons in the U.S., 8.9 tons in Germany and 11.2 tons in Russia and the OECD average is 9.5 tons.

In light of that information, the minister called for a fairer distribution of liabilities among countries that are party to the agreement, highlighting that the standards demanded from Turkey were not just as the country is still developing and among the least polluters.

"It is not just for Turkey to share the same burden with countries that mostly pollute the world and pose great threats to the future. Therefore, it is must to reshape the discussion on the Paris Agreement and re-define the status of countries that are party to the agreement. Hence, a correct classification and a fairer share of responsibility will institute a powerful synergy," Albayrak said.

Speaking at the same event, Sabancı University Founding Chair of the Board of Trustees Güler Sabancı elaborated on energy investments from a global and local perspective.

Pointing out that more than 90 percent of the global energy investment was financed by the private sector, Sabancı drew attention to the regulation in the Turkish energy market. "The pricing mechanism in the energy market must be based on such market dynamics as supply, demand, costs, efficiency, and technology." She noted that regulated energy tariffs must be revised, and the market should institute a competitive business environment that features energy efficiency.