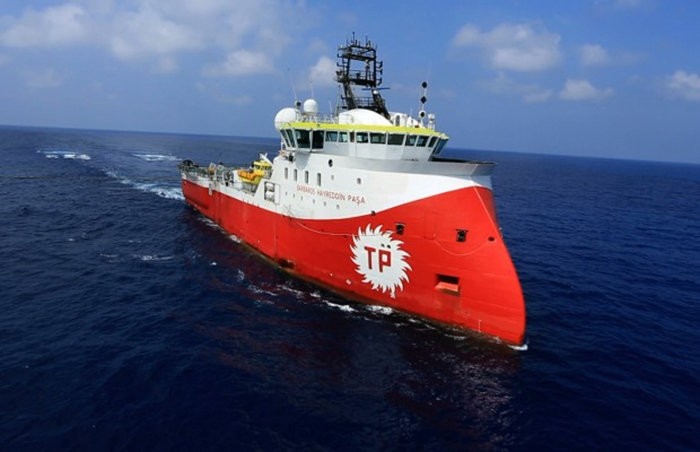 Turkeyu2019s seismic vessel Barbaros Hayreddin Pau015fa has been conducting surveys in the Mediterranean as Turkish Petroleum holds exploration rights for a period of 30 years.
by Elif Binici Erşen Oct 17, 2017 12:00 am

Expanding energy cooperation between Turkey and Northern Cyprus in water supply, power transmission and hydrocarbon exploration has innovative potential that proves promising for steering political and energy policymaking in the region

Political and economic cooperation between Turkey and the Turkish Republic of Northern Cyprus (KKTC) has gained notable momentum in the recent period, with three key energy projects, including power and water supply to Northern Cyprus, hydrocarbon seismic surveys and exploration operations. This incrementally strengthening collaboration, however, not only affects bilateral relations between the sister countries but is also deemed promising for regional instability as a whole, showing great potential to open up new horizons in the energy and the political state-of-affairs on a regional and global level, opined Northern Cyprus Economy and Energy Minister Sunat Atun.

In an exclusive interview with Daily Sabah, Minister Atun elaborated on the energy projects that Turkey and the government of Northern Cyprus are conducting collaboratively. He specifically explicated how these projects could further provide new platforms and horizons for the larger, eastern Mediterranean region which has struggled with lack of access to energy and political turmoil. With the inclusion of Turkey and Northern Cyprus in the operational stage, the macroscale international projects which aim to carry gas from the eastern Mediterranean to Europe will also lead to increased effectiveness in the functioning of regional and global politics. 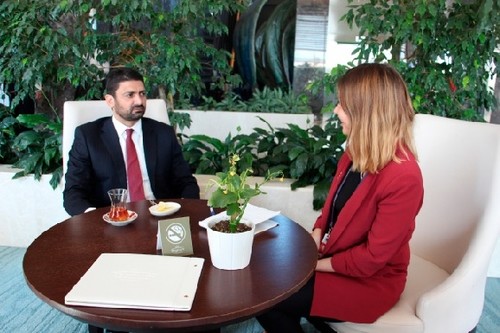 The first of its kind in the world, the water supply project to the KKTC via pipelines began operating in October 2015. Designed during the Prime Ministry of President Recep Tayyip Erdoğan, who championed the water transfer project, it provides the north with 75 million cubic meters of drinking and irrigation water annually via 80 kilometers (50 miles) of pipeline.According to Atun, "[The project], also called 'Peace Water,' can supply water to the south, where Greek Cypriots live, which President Recep Tayyip Erdoğan has also confirmed on behalf of Turkey." Although the water supply project is designed to cater to the potable and irrigation water needs of Northern Cyprus specifically, he stated that Northern Cyprus is willing to offer these benefits to the south, as well as other countries suffering from water shortages. In that regard, the project can address regional issues and could assume a global role, he noted.

The second energy project being collaborated between Turkey and Northern Cyprus is regarding power transmission via underwater cables. While an agreement regarding the scope of the project is slated to be signed by the end of the year, the project is expected to start transmitting power within one or two years, according to the minister. Atun also informed that the project begins at the Teknecik power plant in Northern Cyprus and will be connected to the transformer station at Turkey's Akkuyu power plant.

Speaking about the needs of Northern Cyprus, Atun said: "We are an island that prides ourselves in the natural beauty and tourist attractions we have to offer. However, the power generation model that has been used thus far, has relied on fuel-oil based generators. This energy model is not economically or environmentally sustainable." The minister went on to explain that the model is not economically sustainable because the fuel oil supply depends on foreign currency volatility, ultimately pushing energy costs up further. He noted that the island requires 200,000 tons of fuel oil for power generation, accounting for $100 million per year.

The minister said the Turkish Cypriot government aims to prevent the island from turning into an island of generators, as the increasing demand for energy and the expanding economy require vast amounts of power. "President Recep Tayyip Erdoğan supports this power generation project immensely, and the process has been expedited since incumbent Energy and Natural Resources Minister Berat Albayrak assumed his role," Atun said. Drawing attention to the vast energy basket of Turkey, which includes coal, natural gas and renewables for power generation, Minister Atun stated that the country will be able to institute a more stabilized energy market in terms of pricing, with international natural gas agreements such as TurkStream. In that regard, the underwater cable system will allow Northern Cyprus to also benefit from the energy ecosystem in Turkey. Highlighting that the project's primary goal is to institute sustainability in the Northern Cyprus energy market, he added that it will also contribute to economic ties with the Greek Cypriot administration, as it is projected to supply power to the southern part of the island as well.

Minister Atun informed that the power exchange between the two parts is very constructive and builds trusts. Currently, Northern Cyprus already provides electricity to the southern part of the island via three points, at a capacity of 400 megawatts (MWs). "If needed, the power that comes from Turkey via the underwater cable system can be supplied to Greek Cyprus and other countries in the region," Atun said, emphasizing the project's regional and global potential. Greek Cypriots, like their northern neighbors, also heavily rely on generators that work on fuel oil for power.

The third Turkey-Northern Cyprus energy partnership includes seismic exploration for hydrocarbon resources in the region. Turkey's seismic vessel Barbaros Hayreddin has been conducting surveys in the region since 2015, when the two sides signed an agreement that gives Turkey exploration rights for 30 years.

In 2011, Turkish Cypriot government called on the southern administration to cease operations run by multinational energy companies like Noble in the so-called exclusive economic zones, which had been single-handedly declared without the inclusion of the north in previous negotiations. "We proposed that the operations be halted until an agreement could be reached between the two sides. Alternatively, we proposed that a joint committee be established to oversee these exploration operations," Atun said, adding that the Greek Cypriots declined their proposal.

Considering the one-sided exploitive policy of Greek Cyprus as an intervention and appropriation of their sovereign rights, the energy ministers on both sides, Albayrak and Atun, took immediate action to accelerate the process, with a strong will to protect the Turkish rights on the island. Minister Atun informed that the seismic surveys were completed in July and are now being refined for the purpose of extracting more comprehensible data. "The data we have gathered so far is very promising and indicates that there is potential in the region. Turkey and Northern Cyprus will act together to unleash that potential, access to natural gas resources and to commercially evaluate it by bringing a drilling vessel which Turkish Petroleum has bought by the end of the year. The vessel will begin offshore drilling after the new year, as Minister Berat Albayrak announced," he said, explaining the course to be followed in natural gas explorations. In case the results are commercially viable, Atun noted, Northern Cyprus will assume a significant role in the energy equation of the region.

Drawing attention to the fact that Turkey and Northern Cyprus are not the only countries in the region that are involved in the energy business, he said the most alluring export market for eastern Mediterranean gas is Europe. In order to export the gas that is extracted and produced in the region, a route that passes through Northern Cyprus and Turkey is the most feasible direction. "Our geographical location offers the most lucrative route, particularly considering the investment costs via a route that passes through Greece, which would not be viable at this market prices," Atun indicated."Connecting natural gas pipelines from a drilling well in the region to Turkey's Ceyhan via Northern Cyprus will make us a solution partner for energy. Accordingly, this will redefine our political status," he said. An energy solution that includes Turkey and Northern Cyprus will transfer the Cyprus problem away from politics and to the sphere of energy, he added. Accordingly, he emphasized that the energy partnership between Turkey and Northern Cyprus will bring new horizons to the ways of setting up a political platform and sorting out energy equations.