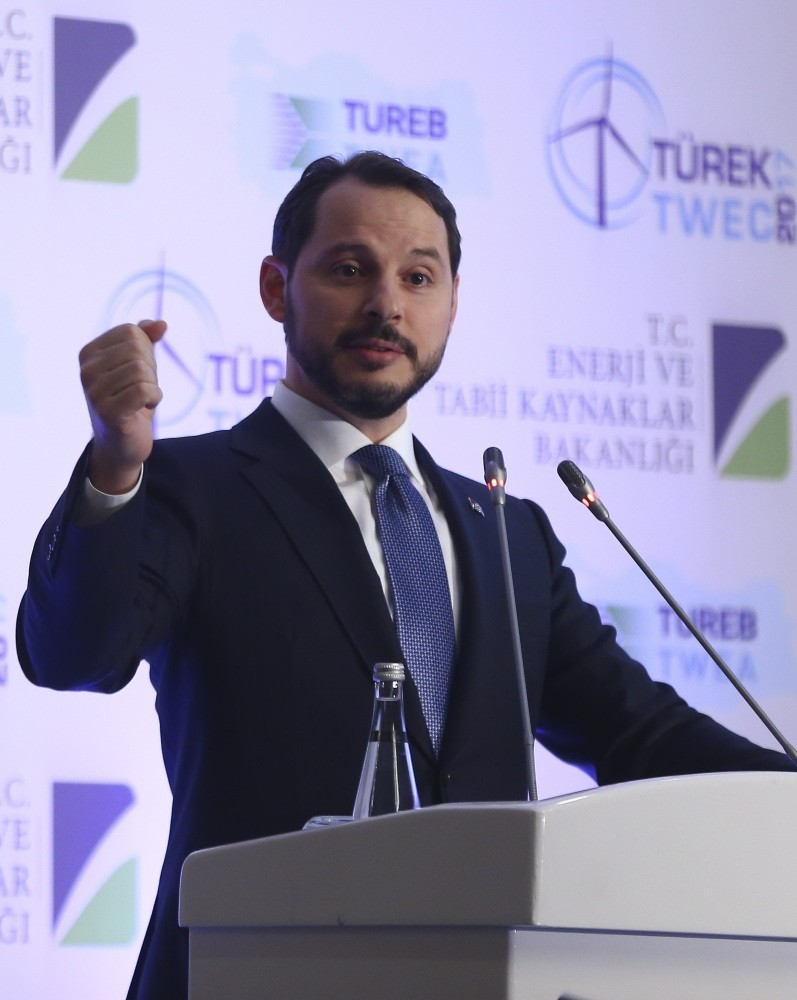 Indicating that Turkey has prioritized its own resources towards ‘more domestic and renewable' principles, Energy Minister Albayrak said low-cost investment opportunities are attracting a lot of interest from investors

Steps in the direction of national energy and mining policy are continuing and low-cost investment opportunities are attracting high interest from investors, Energy and Natural Resources Minister Berat Albayrak said yesterday. Speaking at the 6th Wind Energy Congress (TÜREK), Albayrak said Turkey will continue to increase its potential as an important export center in the region by also strengthening its energy sector. "It is our duty to pave the way, to open the way to investor," he said, adding that they will improve the environment and clear the path for investors to make investments easier.

"In order to support your economic growth, you have to make investments in terms of the energy that goes parallel with it. You can see how big a success story Turkey is when you add 7 percent growth in the energy sector to about 6 percent of Turkey's economic growth in the last 15 years," Energy and Natural Resources Minister Berat Albayrak said.

Turkey steadily moves forward in spite of all the global and regional problems it has experienced in recent years, Albayrak said, adding that it is now necessary to set targets in the energy field to advance to a "higher league."

He said that Turkey prioritized its own resources in the direction of "more domestic and more renewable" principle and those steps were taken in this direction. Turkey has revealed attractive models for international investors with its investment capacity, potential, investment incentives and attractive opportunities, Albayrak said, adding that the country has put forth a great success story thanks to the said models in the last 15 years.

The minister also said the Renewable Energy Resources Support Mechanism (YEKDEM) has made a great contribution to the sector during its implementation, announcing that the mechanism has filled its term and that the implementation will end in 2020.

"A model has to satisfy an investor, a consumer, an industry in an equal and balanced way in order to be sustainable. Otherwise, someone else comes in, stops this model and puts out another process," he added.

Albayrak recalled that eight of the 10 largest energy companies in the world participated in the Renewable Energy Resource Areas (YEKA) bidding, indicating that it represented the potential of the foreseeability of the Turkish market.

Explaining that the YEKA model has been put forward in order to confront the market with a more rational model in the energy, Albayrak said: "This has become a successful model in many senses and a model that has made a tremendous impact in the world."

Underscoring that they are working on new models in solar and wind energy, he said, "By using every source with maximum efficiency, we have to open up the way for the maximum competition. Important steps will continue to be taken in terms of technology transfer and domestic production."