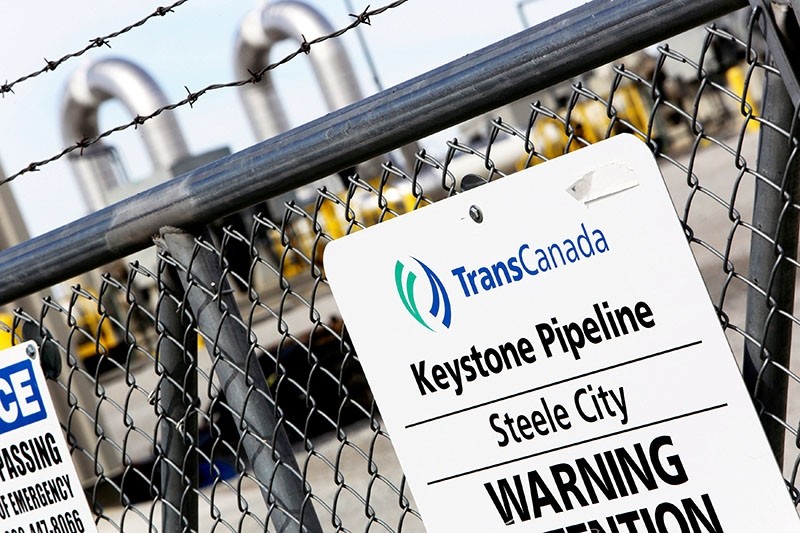 The Nebraska Public Service Commission's decision, which can be appealed by opponents, follows a leak that occurred last week on the existing Keystone pipeline.

The Canadian-based pipeline company wants to build the 1,900-kilometer Keystone XL extension as a shortcut to pump about 830,000 barrels of oil a day from Alberta oil fields to U.S. refineries in Texas and Illinois.

The Keystone XL route approved Monday is northeast of the path TransCanada prefers, and will still require the company to negotiate rights to use private owners' land.

"As a result of today's decision, we will conduct a careful review of the Public Service Commission's ruling while assessing how the decision would impact the cost and schedule of the project," Girling said in a statement.

In Canada, both federal and provincial politicians welcomed the commission's decision.

"This is another step in our broader effort to bring more Alberta oil to the world, diversify our markets and maximize the value we as Albertans get," Notley said in a release. 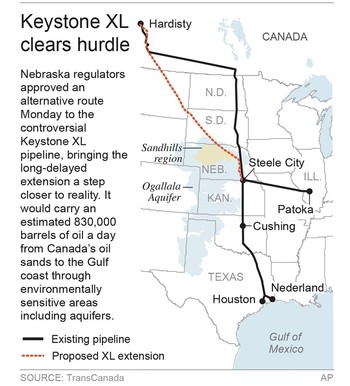 Nebraska was the last jurisdiction to approve the pipeline's route, which begins in Alberta, then crosses into Saskatchewan, as well as U.S. states of Montana and South Dakota before reaching the existing line in Steele City in Nebraska.

The project is supported by Nebraska's governor, labor unions and the business community, while environmentalists, some landowners and Native American tribes are opposed. The Nebraska commission is not an environmental regulator, and is only meant to weigh whether the project is in the state's economical interest.

The U.S. federal government previously rejected the project, but the U.S. State Department in March issued a permit authorizing TransCanada to build Keystone XL across the US border.

President Donald Trump, who took office in January, is a vociferous supporter of Keystone XL, emphasizing the project's economic impact and enhancement of U.S. energy security.

Environmental groups, arguing that the pipeline endangers water resources in its path and is an unnecessary investment in climate-changing fossil fuel infrastructure, have threatened lawsuits to block the project.

"Regardless of the Public Service Commission's decision today, millions of people across the country will continue to speak out and demand that the Keystone XL project never gets built," Sierra Club Executive Director Michael Brune said in a statement.

TransCanada still needs federal approvals from the Army Corps of Engineers and Bureau of Land Management before construction could begin, and a federal lawsuit brought by the Sierra Club and other groups challenging the State Department's approval of the project is still ongoing, the environmental group said.

It remains uncertain whether TransCanada has lined up enough customers to go forward with the Keystone XL project, proposed in 2008 at a peak in oil prices, which have since fallen by more than half.

TransCanada shut down the existing Keystone Pipeline on Thursday after detecting a drop in pressure caused by a leak estimated at 5,000 barrels in South Dakota, which borders Nebraska to the north.

TransCanada said Sunday that clean-up crews numbering 150 people were working at the scene of the leak.